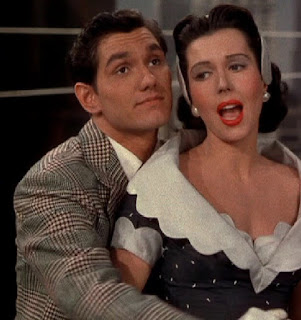 Tall, handsome, dark-haired Tommy Rall was never a movie star leading man but he certainly was one of the most extraordinary dancers in classic movie musicals. You saw him dance and sing with Ann Miller in 1953's KISS ME KATE as the Broadway dancer with a yen for gambling. You saw him as one of the rowdy backwoodsmen at a barn-raising dance in 1954's SEVEN BRIDES FOR SEVEN BROTHERS. 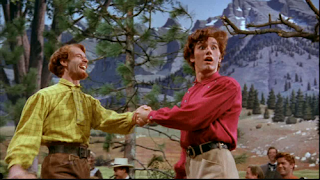 You heard the recent kerfuffle when Lara Spencer, the pop news co-host on ABC's GOOD MORNING AMERICA, made a couple of snarky remarks about little Prince George having ballet classes in his current back-to-school program. She had a look of disbelief on her face when reporting that Prince William said his little boy loved the ballet class. It was an odd and awkward moment of live network television considering that Lara is middle-aged, she makes a reported $3 million and she's been covering entertainment news on national TV for well over a decade. Her comment, not meant to be hurtful, seemed to imply that ballet classes are not for boys -- as if boys have neither the interest in nor the discipline for them. As if ballet dancing is not masculine. 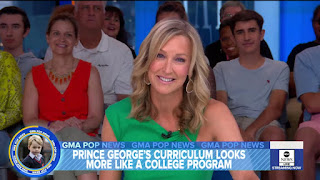 If she saw Broadway shows such as Disney's THE LION KING, BILLY ELLIOTT or CHICAGO, if she saw movies such as WEST SIDE STORY, GUYS AND DOLLS or DIRTY DANCING, did she not know those male dancers spent many days sweating heavily in ballet classes? Or did she think they just made up the steps to the music as it went along -- like they were breakdancers in a Greenwich Village public square in the 1980s?

There's that. This week, we had to endure days of White House weather reports with maps the president drew right before class was dismissed for lunch. Today, I read that my great mate across the pond, BBC 5 Live contributor Lorna Cooper, also loves Tommy Rall.

She's inspired me to reboot and refresh our spirits with samples of the magnificent athleticism, grace and wit of Tommy Rall.

The first of Rosalind Russell's four Oscar nominations for Best Actress came for the 1942 comedy, MY SISTER EILEEN. Two sisters move from Ohio to Greenwich Village in New York City. The older protective one hopes to find success as a writer. The younger sister, Eileen, innocently attracts suitors and madcap situations. It was turned into an original 1955 movie musical, with the same name, starring Betty Garrett and Janet Leigh as the sisters. Bob Fosse and Tommy Rall played two of the guys who compete to win Eileen's heart. Rall is the taller one in the lighter-colored jacket as the two suitors challenge each other in a theater alley dance.

Here's Tommy Rall with Steve Martin and Robert Fitch dancing and lip syncing to "It's the Girl" in 1981's PENNIES FROM HEAVEN.  Rall is on the left in the trio.

Tommy Rall was in the early 50s when he did that PENNIES FROM HEAVEN number. I couldn't move like that when I was in my early 20s.  What a sensational dancer.
at September 07, 2019