He was a new director at MGM, the renowned Tiffany of Hollywood studios for movie musicals. She was a young star of MGM musicals. Under his direction, her stardom would skyrocket from popular Hollywood princess to queen of MGM musicals in the 1940s. While making their first film together, they would fall in love and later marry. She was in her early 20s, he in his early 40s. They were Vincente Minnelli and Judy Garland. 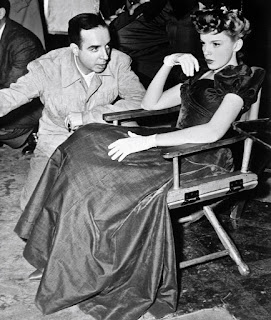 Their first film project was an original screen musical that became the studio's biggest box office hit since 1939's GONE WITH THE WIND. The original musical was MEET ME IN ST. LOUIS. It's a poignant and humorous tale of family love that endures through the seasons, even when a season could bring heartache and disappointment. Despite what happens, the Smith Family will be together. MEET ME IN ST. LOUIS is a true classic with rich performances and memorable songs. I'd seen it many, many times on TV and even in revival theaters. However, it's greatest impact on my heart came when I saw it the first December following the Sept. 11th attacks in 2001. I watched it on DVD and sobbed throughout the entire "Have Yourself a Merry Little Christmas" number tenderly done by Garland. That number at that time in our national history made me long for a holiday family reunion where we could bring all our imperfect selves together for a perfect Christmastime embrace, a hug that would say "I am so glad you're here, I am so glad you're a part of my life." There's extraordinary love in this ordinary American family. 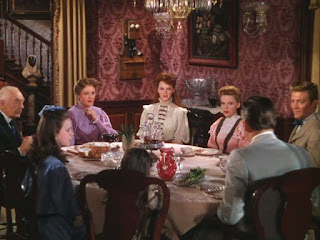 Way back in the late 1980s, I was a veejay on VH1. The network was different then. Music videos were the main fare. When I introduced some of then, I noted that a number of music videos took visual inspiration from classic Hollywood musicals. Whitney Huston's videos had bits of business borrowed by an Audrey Hepburn number in FUNNY FACE and a Fred Astaire number in THE BARKLEYS OF BROADWAY. Paula Abdul referenced Bob Fosse's ALL THAT JAZZ in one of her videos and, in another, she danced with a cartoon character like Gene Kelly had done in ANCHORS AWEIGH. Madonna copied Marilyn Monroe's "Diamonds Are a Girl's Best Friend" number from GENTLEMEN PREFER BLONDES in her "Material Girl" video.

A buddy of mine back then said that MTV and VH1 music videos had replaced movie musicals. As a former VH1 veejay, and as a lover of movie musicals, I say that music videos took inspiration from movie musicals but they did not replace them. Marketing is a main force that drives the music video. With the quick shots and edits that seem to come every :03 to :06 seconds, with the several changes of wardrobe and location or background, the main purpose is to sell the artist, present an image and sell records. When chameleon Madonna wanted to show a new image, she did it in a music video. In a movie musical, one can extend and/or present a new maturity in a star's image. The musical numbers, however, are "reveals." They are present to reveal more about the character and the character's emotions which will be important as the story progresses. In the number, a creative and skilled director -- like Vincente Minnelli -- can highlight the star's look and the star's strength as an artist. 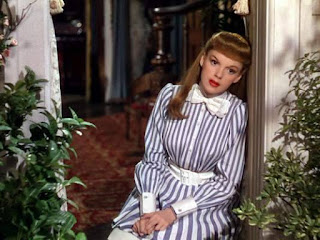 Early in MEET ME IN ST. LOUIS, we see that Esther Smith has a crush on the boy next door. On a trolley ride with friends, she hopes to see him. As the ride begins, she notices he's running to jump on. She's so filled with joy that simple spoken words are not enough. She sings her feelings. Near the end of the movie, he will propose to Esther on Christmas Eve. But a major relocation for the Smith Family could separate them for a long time and dissolve the romantic relationship. On the trolley, though, all is jubilant. Notice that Minnelli frames Garland's character like she's the center of a picture postcard. Esther wears a darker jacket. The other women all wear brighter colors. Esther is the only female not wearing a hat. The large decorative hats the other ladies wear almost serve as presenting lovely Esther in the center of a colorful floral display.

Musicals are festive and fun on the big screen. In production, they are hard work. Notice Judy Garland's strength as an actress and a singer. There are no MTV-like quick cuts and edits from Minnelli. Judy sings in one continuous take for about 2 minutes before there's a cut for a different angle. Basically, she nailed a couple of hours of studio work in one continuous take. Her emotions as Esther Smith are fluid, spontaneous and, acting-wise, spot on for a girl who's thrilled she may be near the boy who makes her heartstrings go "Zing!" This is excellent singing and acting.

Here's "The Trolley Song" in Minnelli's MEET ME IN ST. LOUIS, thanks to Warner Archive:

Movie musicals are an art form. Judy Garland and Vincente Minnelli were masters in the art.
at September 09, 2019