I often recall three things Mom taught me when I was a little boy. She'd say "Mind your manners, eat your vegetables, and never cross a picket line." Mom was a registered nurse and proud union member. I also remember the time I said to one of the other kids on the block, "My mom's home today because she's on strike." Dad worked for the main post office in downtown Los Angeles and he, too, was proud union member. In those days, Channel 9 was KHJ-TV in the SoCal area. It was an independent station hooked up to the Warner Bros. film library. THE PAJAMA GAME, starring Doris Day and John Raitt, was frequently in the Million Dollar Movie spotlight. When Doris and the chorus sang "Seven and Half Cents" as striking factory workers, I understood what that scene meant because my parents were union members. 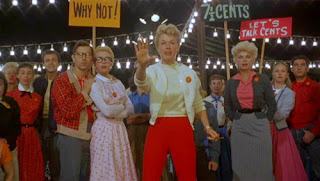 I'm a proud union member. My union is Screen Actors Guild, also known as SAG-AFTRA. It is a relief and a blessing to have that organization at my back. Let me give you the biggest example why. I once took a non-union TV job. It was to host a new national half-hour show on a popular cable channel. Initially, the company expected that the project would last only 13 weeks with 1 episode airing per week. Surprisingly, it turned out to be a hit and we taped 100 episodes. I didn't have on-camera duty every week but I did have voiceover recording sessions every week for post-production.

With a union job, I know that I will get paid every two weeks. With that job, I was lucky if I got paid every two months. I never knew when the paychecks were coming and, when they did, they were never for the same amount. I was professional and did the work. However, worked a year and a half for that company and never got paid every month. THIS is why I love my SAG-AFTRA union.

I absolutely loved my weekly job as entertainment editor for the ABC News live weekday production called LIFETIME LIVE. The hour-long show aired on LifetimeTV in 2000. I wish you a great Labor Day and send you off with this Labor Day movie recommendation I gave to the late, wonderful Dana Reeve on LIFETIME LIVE. Heck, it's a holiday. I'll also leave you with that Doris Day number from the 1957 Warner Bros. musical, THE PAJAMA GAME.