I have a longtime dear friend who can confirm this. I relocated to accept a TV job in New York City in 1985. That year, KISS OF THE SPIDER WOMAN opened at a movie theater in midtown. I saw it one afternoon. That was my first viewing. KISS OF THE SPIDER WOMAN, especially the unforgettable performance by Raúl Juliá, just about made my soul experience an axial shift towards a new light. Something in me was illuminated. I am not ashamed to admit that I paid to see it again about five more times. A friend from my college years in the Midwest who became my roommate for a year in Brooklyn was my guest for a sixth viewing. He had to know what I found so fascinating about the film. He saw it -- and then he knew. Raúl moved him too. 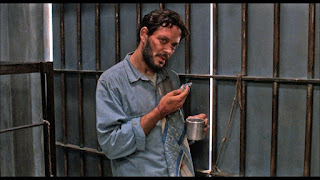 It's Friday, September 13th, and AMERICAN MASTERS on PBS puts the late, great actor in the spotlight tonight at 9:00/8:00 Central.  You need to see it. Cancer stole Raúl Juliá away from us but, Lord, Raúl did leave some brilliant work behind for us to see. 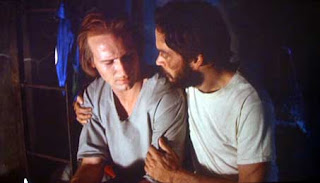 This very week is an anniversary week for me. In 1988, the was the week my prime time VH1 talk show, WATCH BOBBY RIVERS, premiered. It was a half-hour program. My sole guest for the premiere show was Kirk Douglas. Raúl Juliá was also a guest during my show's run. I'd been in his presence before when I worked at another TV station in New York City and he came in for an interview. He had a charisma and a presence that was like an invigorating force field. As my guest on VH1, he was warm, gracious, appealing, playful and grateful. I was honored, humbled and proud to have him as a guest. He'd blasted a big hole through barriers of race and color.  I know many of you have seen this demo reel of mine already. But I want to share it again because Raúl Juliá is in it -- and I want you to see the PBS documentary about him tonight. On my show, I asked him about KISS OF THE SPIDER WOMAN. 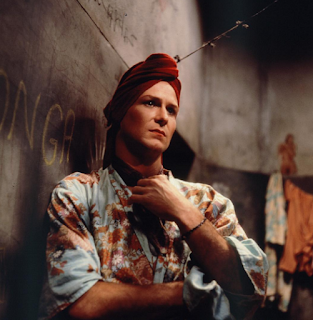 In the story of two cellmates in a Latin American prison, William Hurt (above) played the jailed drag queen who is fascinated with old movies and top female movie stars. Raúl Juliá played the very macho political dissident. Hurt won the Best Actor Oscar for his performance. The film got Oscar nominations for Best Picture of 1985 and Best Director.

Here is a short preview of tonight's PBS presentation about the artist. He was extraordinary.