For a lot of us African Americans of a certain age, the news that singer/actress Diahann Carroll passed away hit us as if we'd just learned that a beloved senior family member had died. The place she held in our hearts was that special. Diahann Carroll died at age 84. Tributes on social media were immediate. I listened to the news of her passing on radio newscasts out of Los Angeles. The news reports and comments from entertainment contributors all mentioned Ms. Carroll's landmark role on the trailblazing TV sitcom, JULIA, on NBC in the 1960s. Her addition to the cast of ABC's hit prime time series, DYNASTY, was also mentioned. There was much more to her great career than those two TV shows. 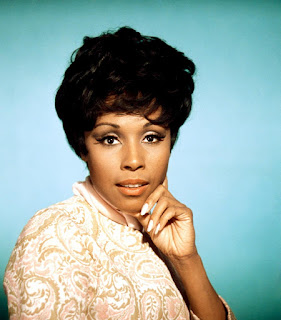 By the time she was teetering on the brink of turning 21, Diahann Carroll has shared screen time with Dorothy Dandridge in the 1954 musical drama, CARMEN JONES.  Dandridge was the first Black person, male or female, to receive an Oscar nomination in the "Best" category. The first two Black performers to get Oscar nominations were Hattie McDaniel, winner for 1939's GONE WITH THE WIND, and Ethel Waters for 1949's PINKY. Both women were nominees for Best Supporting Actress. Dandridge was nominated for Best Actress. (In the above CARMEN JONES photo, you see Dandridge in the pink, Pearl Bailey in the middle and Carroll on the right.) Diahann Carroll worked again with Dorothy Dandridge in her last Hollywood film, PORGY AND BESS, a 1959 adaptation of the classic stage musical. The film co-starred Sidney Poitier, Pearl Bailey and Sammy Davis, Jr.

GOODBYE AGAIN is a 1961 love story starring Ingrid Bergman and Anthony Perkins. Just like an earlier film starring Ingrid Bergman, 1942's CASABLANCA, this is a film that's sweetly subversive in its presentation of Black images. Just like Dooley Wilson in CASABLANCA, Diahann Carroll played a singer in a sophisticated overseas nightclub. The oft-told tale is that Lena Horne's numbers in 1940s MGM musicals were inserted into the action in such a way that they could be edited out when the movies played in America's Southern states. As James Gavin painstakingly documented in his Lena Horne biography, STORMY WEATHER: THE LIFE OF LENA HORNE, the actual removal of her numbers was more legend than fact. However, it is obvious that the glamorous Black singer/actress was never granted the opportunity in her A-list MGM musicals of the 1940s to do scenes with MGM's white, fellow A-list musical stars. Lena Horne never did dialogue opposite Frank Sinatra, Gene Kelly, Judy Garland or Fred Astaire. In CASABLANCA, Dooley Wilson as Sam is half of an important 2-character scene -- one scene with Ingrid Bergman and one with Humphrey Bogart. In another scene, the two lovers (Bergman and Bogart) are having a bottle of champagne ... and invite Sam to join them. In most Hollywood films of that era, the Black person would've been a servant who poured the champagne and then went back into the kitchen. In CASABLANCA, Sam is a friend.

In GOODBYE AGAIN, Perkins plays a young man having a complicated romance in Paris. He enjoys the number by the elegant singer and she joins him at his table for a drink. I loved Anthony Perkins and Diahann Carroll together.

Diahann Carroll's other 1961 film release was PARIS BLUES. Sidney Poitier, the first Black man nominated for an Oscar and the first to win the Best Actor Oscar prize (for 1963's LILIES OF THE FIELD), was Diahann Carroll's leading man and romantic interest onscreen -- and off, for a time. In America, the Civil Rights movement was gaining momentum. PARIS BLUES may be a little light on story, but it's blessedly heavy on positive Black images and inclusion. Paul Newman, Sidney Poitier, Joanne Woodward and Diahann Carroll are the four leads. Newman and Poitier play best friends, jazz musicians in Paris. Poitier's character is a composer/arranger -- like a Billy Strayhorn. The other two Americans in Paris, played by Woodward and Carroll, are best friends who worked and saved their money for a vacation in Europe. The two ladies meet the two jazz musicians and love ensues. That's pretty much the plot. The race situation in America gives an added dimension to the Poitier/Carroll storyline. Connie (Diahann Carroll) feels things are changing in America. She wants to be part of the movement. Eddie (Sidney Poitier) is wary. He reminded me of my father who told me several times that, when he served in the segregated Army of World War 2, the first white people who ever called him "Sir" were people of France and Great Britain. 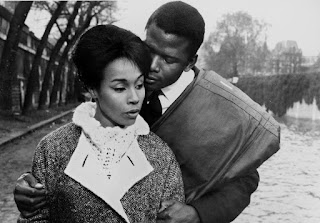 I remember being a little boy and watching PARIS BLUES with my parents. They grew up seeing Black people in movies be limited to playing servants, slaves and Congo warriors. To see a stylish, educated, employed Black American couple as sweethearts in Paris was hugely significant to them. And when Paul Newman tosses a classy flirt to Diahann Carroll in an opening scene -- Wow! That was major for 1961.
Diahann Carroll made history on Broadway years before she made history on TV's JULIA. Richard Rodgers, of Rodgers & Hammerstein fame, wrote the score for a modern-day musical drama. At the heart of NO STRINGS was an interracial romance. Again, Diahann Carroll played an American in Paris. She's a native New Yorker who has broken through a color barrier to be a high fashion model working in Paris. Another American in Paris is a Pulitzer Prize winning novelist whose artistic flow is temporarily blocked. He's white. He and the model meet and fall in love. But can their interracial romance survive if they return to early 1960s America when interracial marriage was still illegal in several states? Actor/singer Richard Kiley (seen in the films BLACKBOARD JUNGLE and PICKUP ON SOUTH STREET) was Carroll's leading man. The book was written by Samuel A. Taylor, the man who wrote SABRINA FAIR. That play was turned into the 1954 film, SABRINA, starring Audrey Hepburn.

Diahann Carroll beautifully introduced "The Sweetest Sounds" in NO STRINGS.
In 1962, her Broadway role was a non-stereotypical one for a Black woman. She was the first African American woman to win the Tony Award for Best Actress in a Musical. 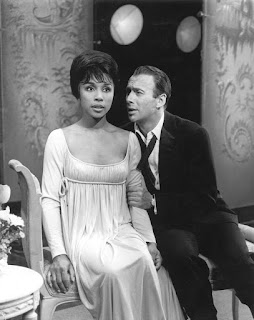 Hollywood did nothing with the Richard Rodgers 1962 Tony winner, NO STRINGS. Shame on Hollywood. 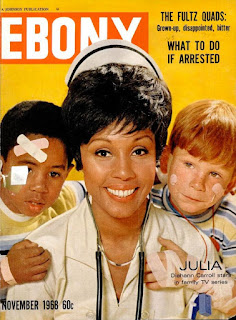 In 1968, Diahann Carroll made history with the premiere of JULIA on NBC. A Black woman was the lead character on the sitcom. She was not a domestic. She was a registered nurse, a single working mother. Her husband died serving in the Vietnam War. That character looked familiar to me. Our mother was a registered nurse who wore the same kind of outfit, including the starched white cap, that Julia wore to work. During its three seasons, Julia's cousin appeared in a few episodes. Cousin Sara was played by Diahann Carroll's dear friend, the equally extraordinary and groundbreaking Diana Sands. Sands was in the original Broadway cast of A RAISIN IN THE SUN (and the film version), she starred in a revival of George Bernard Shaw's SAINT JOAN, the first Black actress to take on the lead role, and she was Doris in the original Broadway production of THE OWL AND THE PUSSYCAT.

Diana Sands was slated to play the lead role in 1974's CLAUDINE when she was stricken with cancer. She asked Diahann Carroll to take over the lead for her. Diahann did, opposite the second Black man who was an Oscar nominee for Best Actor, James Earl Jones. CLAUDINE, a movie about Black urban family life, is so authentic you can practically smell the burnt hair on Claudine's hotcomb. For her performance, Ms. Carroll became the fourth Black woman in Hollywood history to get an Oscar nomination for Best Actress. 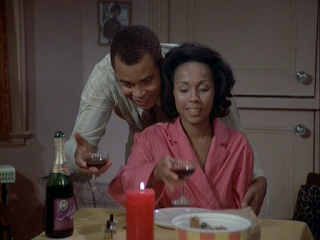 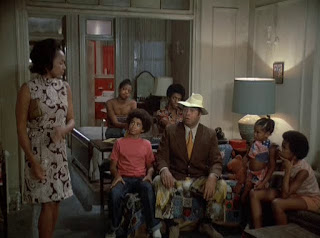 After she won the Tony Award for NO STRINGS in 1962, she sang at a birthday party for President John F. Kennedy. In 1963, she participated in Dr. Martin Luther King's historic March on Washington. Here she is marching with James Garner and a bearded Paul Newman. 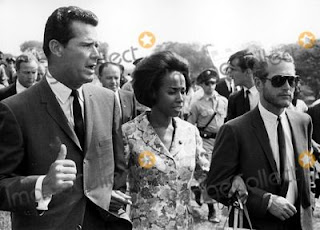 In 1997, Diahann Carroll slammed across a terrific performance as the fortune teller in EVE'S BAYOU, the remarkable directorial debut of Kasi Lemmons. The Black female filmmaker had played the best buddy to Jodie Foster's character in THE SILENCE OF THE LAMBS. 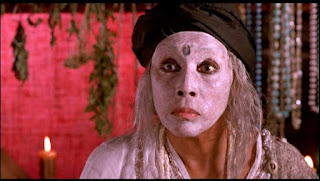 There you have it. The lady made history other than JULIA and DYNASTY on TV. Diahann Carroll was a fabulous example, a role model, a talented woman who was elegant and earthy, a combination of grit and grace and a product of a show biz era in which performers proudly perfected a sense of glamour and charm. She was a regal beauty who enriched our Black History on Broadway, on film and on TV.