On HOW TO BE A LATIN LOVER

Let me tell you about a lunch experience I once had with a buddy in midtown Manhattan. He wanted to grab a bite and, because he was shopping that day, he suggested the cafe in a posh Manhattan department store. I just wanted a cheeseburger deluxe. Nothing fancy. I ordered what was advertised on the menu as a cheeseburger. It came on a fancy plate. The burger was not served on a bun. No. Instead, it was inside an English muffin. As for the fries, there were about six Julienne fries underneath a piece of Romaine lettuce. When I lifted up the lettuce with my fork, I felt like an American G.I. who'd just discovered a half dozen concentration camp survivors huddled together in a corner. That's how thin those fries were. Uptown where I lived for a while in Harlem, I could've gotten a cheeseburger the size of a back wheel on a kid's tricycle with fries cut on the thick side. Plus a bowl of cole slaw. And it would've been cheaper than that fancy alleged cheeseburger deluxe in the department store cafe. Which brings me to film critics and a review of HOW TO BE A LATIN LOVER.

I took film courses in college. I've done film reviews on local and network TV. My goal as a film critic, mainly, was to take a smart working class approach to the film in my reviews. I did not expect to win a Pulitzer or to be quoted in newspaper ads, but I did go after film critic work on TV enthusiastically because I never saw anyone who looked like me -- or our neighbors on the block in South Central Los Angeles -- do regular film reviews on local or network TV. Film critics on TV, be it Los Angeles or New York City, were mostly Caucasian males. Sometimes, the way they reviewed a film, made me think they were playing to an audience of follow Caucasians that would order a posh cheeseburger served on an English muffin.

HOW TO BE A LATIN LOVER is now on Netflix. It's an unsophisticated, fun comedy about an aging and clueless Mexican gigolo whose longtime sugar mama wife (older than he) downsizes him in favor of something younger. He leaves their Bel Air mansion and, out of economic desperation, winds up living with his wonderful estranged sister and her little boy, his nephew. Maximo's motto in his gigolo life has been "Once you lower your expectations, the sky's the limit." Maximo acts and occasionally dresses as if he's still a hot piece of man-candy in his 20s. Now in his 40s, he must learn how to act his age, how to be a better brother and how to be a good uncle. Eugenio Derbez plays Maximo. Derbez is a popular movie star in Mexico. The cast also includes Raquel Welch. Welch looks sensational and reminds moviegoers that she can do comedy. Linda Lavin, Renee Taylor and Kristin Bell are in the movie too with funny scenes. Salma Hayek stars as Maximo's sister, a single working mom. 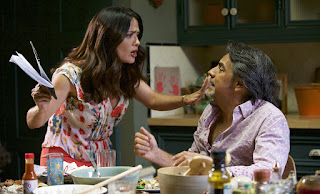 When HOW TO BE A LATIN LOVER opened theatrically, I heard a scholarly (and Caucasian) film critic review it on a Los Angeles NPR program. He was not mean in his short review. However, he did pretty much dismiss it as a goofy movie that probably would not do much at the box office. When I heard him say that, I thought to myself, "Dude. Are your sure about that? Do you realize how massively populated with Mexicans Southern California is? Mexicans who go to the movies?"

I watched HOW TO BE A LATIN LOVER last night on Netflix. It had me laughing in the first five minutes. It starts like a sentimental Lifetime TV or Disney movie about the simple, poor Mexican family with the loving papa who works long hours. We see papa, mama, the little boy and the little girl. Then we see how the little boy grew up to become the Mexican version of AMERICAN GIGOLO. Maximo has devolved from being a hot lover to being a hot mess as he pursues one more possible sugar mama.

Click onto this link to see a trailer for the 2017 release:

True, HOW TO BE A LATIN LOVER is lowbrow. But there's heart to it that the critic on the radio show never mentioned. Raphael Alejandro, the kid actor who played the bookworm nephew, is absolutely adorable. He's so natural. So perfectly awkward and charming. I loved watching how the relationship between the shy nephew and the errant uncle grew into a tender family bond. 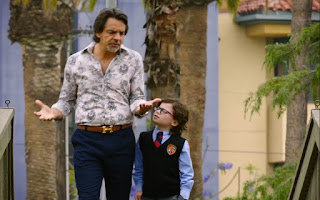 After a day of impeachment-related news and battling polar temperatures outside, I was in the mood for some easy laughs, likeable characters and a beer. HOW TO BE A LATIN LOVER sure was fun. As for the film critic's comment that it probably would not do much at the box office, here's some news: It cost about $13 million to make. It raked in $62 million at the box office.