This is a quick programming note, if you will.  It's June now.  In April of this year, we reflected on the 50th anniversary of the assassination of Dr. Martin Luther King, Jr.  This month, we reflect on the 50th anniversary of the assassination of Senator Robert F. Kennedy.  1968 was a mean year, a year that robbed us of two American men who gave hope to and fought for the poor and disenfranchised.  Senator Kennedy was campaigning for the presidency when he was shot and killed.  The care and compassion he had for under-privileged African Americans, for black people treated like second class citizens, had an energy you could feel in his presence.  It vibrated.  It touched your soul.  That's the feeling I got when I was a school kid running joyfully behind his convertible, running with a mass of other South Central L.A. residents eager to see him when he came to speak at a park in Watts near my high school.  Seeing him in person was an image that burned itself into my heart and memory and remains vivid.  He was dead two days later. 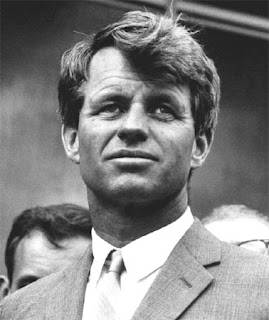 The life and times of Robert F. Kennedy will be a feature tomorrow, June 3rd, on CBS SUNDAY MORNING hosted by Jane Pauley.  Senator Kennedy's first child, Kathleen Kennedy, will be interviewed.  CBS SUNDAY airs at 9am Eastern.  Check your local listings. 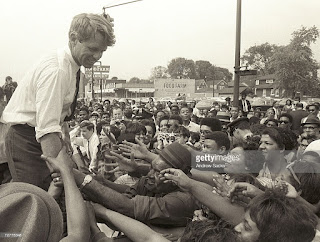 Sunday night on MSNBC, the life of Robert F. Kennedy will be the subject of HEADLINERS.  This MSNBC show airs at 9p Eastern.  Again, check your local listings.

If you can, watch the shows.  See the man.  Listen to his words.  Think about what America could have had in the White House.  Compare it all to what we have now. 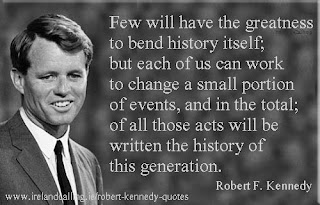