The Strange But True Story from Spike Lee

I have got to see this new Spike Lee movie.  His incendiary new work got high praise at this year's Cannes Film Festival.  Spike Lee's BLACKkKLANSMAN  hits screens this coming August.  This coming August will also mark a dark anniversary in our modern history.  Last August we witnessed violence and a march for white supremacy in Charlottesville, Virginia.  That incident is recalled in Spike's in a section of the director/writer's upcoming release. 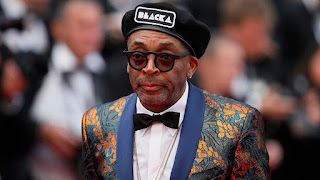 By the way, the film brought Spike a Grand Priz prize at the Cannes Film Festival. 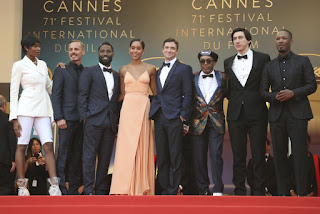 Here's the story:  We got to Colorado Springs in the 1970s.  An African American police detective sees a recruiting ad for the Ku Klux Klan.  It is his job to investigate any subversive activity that could negatively influence the city.  The KKK is subversive activity.  He calls the phone number listed and describes himself as a "pure Aryan white man" who is sick and tired of minorities.

He's invited the join the Klan.
Dig it! Yes, this is based on a true story.  Ron Stallworth, a highly decorated member of the police force, wrote his memoir -- a memoir entitled BLACK KLANSMAN.  My buddy Scott Simon interviewed Mr. Stallworth today on the NPR Saturday morning show, Weekend Edition.  If you're on Twitter, follow @ NPRWeekend.  Scroll down its timeline and you'll come to the Ron Stallworth interview.  Or you can go to NPR.org.

When you get to the NPR website, look up top for "programs & podcasts."  Click into that section and find Weekend Edition Saturday.  Scott Simon's "How a Black Detective Infiltrated the KKK" interview piece is there.  It is seriously worth hearing Ron Stallworth connect those events of 1978 to last year's racist activity in Charlottesville and the President's response to it.  Remember that Trump said that some of the individuals marching for white supremacy were "very fine people."  Ron Stallworth's NPR interview is frighteningly relevant to today's political climate.

Not that Oscars and Oscar nominations are everything -- some of the finest, most memorable classic films, actors and directors never won an Oscar or never even got a nomination.

But...with the accolades Spike Lee's film got from film critics at the Cannes Film Festival...maybe Spike's on his way to getting an Oscar nomination.  He's one of those acclaimed filmmakers who has never been nominated for Best Director.