I had some great luck just a few years ago when a good buddy of mine had a problem catching a flight back from L.A. to New York City.  She was taping entertainment reports and there was snafu with her flight.  She was rebooked to a later one.  She called me and asked if I could substitute for her at a junket for a new series on Starz called POWER.  I was in town and available to pinch hit for her at the Manhattan junket.  Not only that, I'd seen the first season and I really dug it. The story of a role model New York City family man and society figure who's really a drug crime lord hooked me immediately.  It's a juicy, sexy crime series. 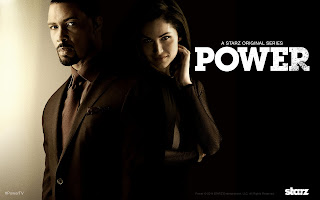 In the seasons since I conducted those interviews, the show has found its voice and gotten richer.  Its audience has grown.  POWER has some immensely talented people in front off and behind the cameras.  However, just like HBO's excellent OZ and THE WIRE, it doesn't get noticed by the folks who give out the Emmys.  The TV Academy.  Did you watch OZ and THE WIRE?  Not a single one of the actors in either cast ever got an Emmy nomination.  And there was some damn good acting on those shows.  Well, the same goes for POWER.  As of yet, not a single Emmy nomination has graced any member of its talented cast.  Its new season begins Sunday night at 8:00, July 1st.  Because of that, I thought I'd post those interviews I did.  In addition to being talented, the actors were very polite.  As we know in our modern times, courtesy is not exactly common anymore.  I appreciated their politeness. 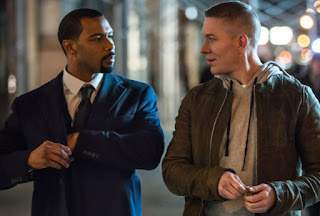 Omari Hardwick plays "Ghost" and Lela Loren is Angela.  I met them when they were promoting the show's Season #2.  He's a true gentleman and she has a very interesting story about the career she might have had if acting had not attracted her.  They give Emmy-nomination worthy performances.
Curtis "50 Cent" Jackson is an executive producer on the show and he's also in the cast.  Joseph Sikora plays Tommy.  Sikora should be doing film roles for Scorcese and Spielberg. If you've seen the series, you might agree with me.  He's terrific as a hood in this series.  He too deserves an Emmy nomination.
I have much, much praise and respect -- and gratitude -- for Courtney Kemp, creator of POWER.  I'm grateful that she created such fresh, strong and complicated characters for actors of color to play.  She is a trailblazer and groundbreaker in television production.  Her previous writing credits include THE BERNIE MAC SHOW and THE GOOD WIFE.

There you have it.  I loved doing those interviews for Season #2.  Season #5 of POWER stars Sunday night, July 1st, at 8:00 on STARZ.  I wish them all a most successful new season.  And some Emmy nominations.