For the Love of Art, PACKED IN A TRUNK

Art, love, sexual freedom, a shady lawyer, women's history, family devotion.  A fascinating story.  Please, go to Amazon Prime video. You must see the documentary called PACKED IN A TRUNK: THE LOST ART OF EDITH LAKE WILKINSON.  It's only 1 hour and 20 minutes long. The time flies by because this search into the life of a late, overlooked painter is so interesting and driven by the love of a relative.  The relative is also a visual artist, a married lesbian mom with a big son who loves basketball.  She's Emmy winner, director/writer Jane Anderson, a woman so dear she'll make you wish she was a member of your family.  Edith Lake Wilkinson was Jane's great-aunt.  Aunt Edith was a lesbian too at a time when American women -- straight or gay -- had limited freedom in society compared to men.  Edith Lake Wilkinson was committed to a mental health institution.  That was a dark gray fate for someone whose colorful work was absolutely gorgeous.  Her paintings made me gasp in awe. 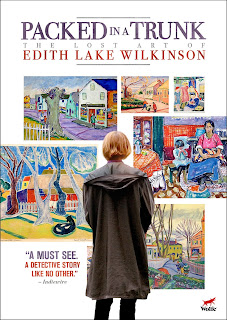 Her style is modern.  Her colors are vibrant, fluid, alive, rich.  She's someone MGM director Vincente Minnelli should have made a film about.  Why?  Minnelli had a great eye for the visual.  He adored color.  He respected and revered artists and their uneasy journeys to add beauty to the world.  Look at his Vincent van Gogh biopic, LUST FOR LIFE, starring Kirk Douglas.  Look at his musical, AN AMERICAN IN PARIS, starring Gene Kelly as a struggling young painter in Paris who's been inspired by the greats such as Utrillo and Lautrec.

Works by Aunt Edith were found packed away in a trunk.  Jane gives us family history.  The story of Edith Lake Wilkinson, painter, goes back to New York City in the early 1900s.  We learn about her life and creativity on East 23rd Street, on West 117th Street, in Harlem and in Provincetown, Massachusetts were artists were free to express their same-sex attractions in a Cape Cod community.

But even there, women were limited.  They were only allowed to sell their paintings one day a week.  The men could sell their work more days a week.

So did she ever make her artistic dreams come true?  What was the state of her relationship with the woman constantly referred to as her "friend"?  And how did Edith wind up in an institution at a fairly young age?  I won't tell you.  I really want you to see Jane's documentary, directed with care and wit by Michelle Boyaner. 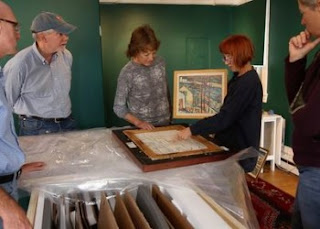 I will tell you that the Edith Lake Wilkinson story is so compelling and relevant that it could inspire a good screenplay for excellent actresses such as Julianne Moore, Cate Blanchett, Laurie Metcalf, Ruth Negga and Meryl Streep.

Watch this trailer for PACKED IN A TRUNK:
One of filmmaking's earliest directors was a woman.  Alice Guy-Blaché in France.  For decades, her name was omitted when male film historians talked or wrote about silent era filmmakers.  However, I once read that she originated some special effects in those turn of the century years that Hollywood's D.W. Griffith "borrowed" when making his famous films around 1915.  I thought about that watching PACKED IN A TRUNK.  I think male painters "borrowed" from Edith. 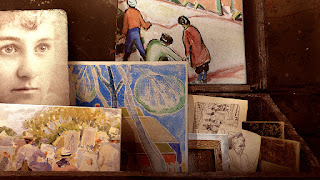 The revelations that come near the end -- Wow.  Three women in a room talking.  I found this way more interesting and surprising than a couple of comic book superhero action movie sequels I've seen.

We all want to be validated.  We all want to be remembered, seen and regarded as significant.  Edith Lake Wilkinson gave life more beauty than it gave her.  She was not treated well.  She was forgotten. I'm sure many of us, at some time, have felt forgotten especially by loved ones.  We feel like we've been boxed up and placed on a distant shelf in their minds.  We grow heartsore waiting for that box to be opened again, for the contents to be seen.  To have a devoted loved one, many years later, work to bring attention, respect and validation to this gifted woman who became a forgotten artist....that is a wonderful love story.  See the documentary.  Give your eyes the gift of seeing her work. Make someone feel significant.  Love freely and embrace the arts.