The news reported that he took his own life.  For the millions of us who loved watching his shows, that news was like a gut punch in the dark.  We didn't see it coming.  World traveler, writer, chef and TV host Anthony Bourdain gave us such a warm, robust, engaged personality on TV -- a cool intelligent guy who took interest in everybody and everything.  Especially food.  TV can be a very beguiling medium.  A person being him or herself weekly on a national show that you watch on a regular basis can begin to feel like a buddy, someone you know.  That's because you see the face and hear the voice in your living room or kitchen or office.  That person, in a way, becomes a part of your life even though you never met.  That's how I felt about Anthony Bourdain. 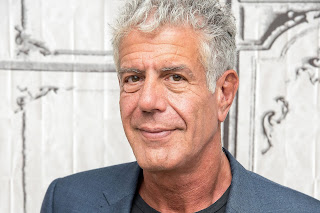 He was a great host and gave us an image we needed to see and imitate.  He paid attention to things and people.  Ordinary people.  Not just famous people.  He listened with zeal.  He didn't do like some folks at a swanky cocktail party and start to sway slightly like a metronome as you spoke to see if someone more fascinating than you had just entered the room.  He embraced and respected other cultures and respected people of other colors and classes.  He could write and tell a terrific story.  He made this great big world seem like a global village.  Personally, I loved the regular spotlights he gave to overlooked ethnic communities in my hometown, Los Angeles.  With his likable hipness and his look of a seasoned rock star who'd been wise with his money, he was the kind of guy that guys wanted to hang out with for drinks, maybe a cigar and some fabulous conversation.  But, again, what I totally loved about him was that he could take that rock star charisma of his, go to a foreign land or an under-the-radar working class eatery in America's "parts unknown" (the name of his show) and make an ordinary person feel like he was that person's biggest fan.  He made that person seem like the rock star.  You weren't invisible to him.  He connected.  And he spoke up for the little guy.  He was an activist.  We need more of that. 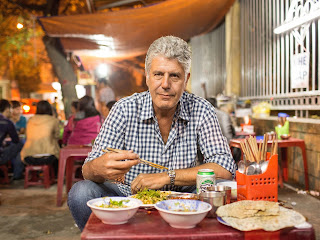 Anthony Bourdain showed the power, joy and surprise of opening up to diversity, inclusion and getting a good taste of someone else's culture and life. 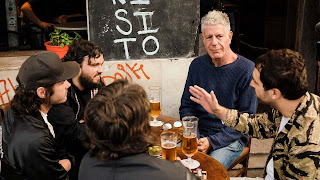 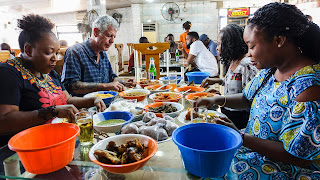 There were so many nights when I watched his shows because my heart was heavy and I needed something to lift my spirits.  If you've read my posts on an occasional basis you know that the last few years for me have been occupationally and finally rough due to the Great Recession.  Between 2008 and 2011, I was knocked flat by two job layoffs.  I lost work.  I lost my apartment.  I feel like I've been living like a gypsy ever since. Different friends and, currently, a wonderful relative, took me in for generous amounts of time and gave me spare room space.  I haven't had a steady job since those lay-offs, but I've hustled up some part time gigs.

In the TV arena, not landing a new job and the frequent frustration I had of broadcast agents rejecting me for representation started to weigh me down.  Our mom passed away last spring and I've always felt guilty that I didn't become a bigger TV talent -- not for the sake of ego and fame, mind you, but because I could have given her more comfortable life than I was able to had I made an income like network news anchors, game show hosts or reality TV stars.  For Mom, I did the best I could. We grew very close in her last five years.  I kept my housing situation and long employment hidden from her.  I told her I was getting by -- that I was freelancing.

So...with the distress of extended employment, the awkwardness of not having my own place, and the alienation no romantic attachment since the late 90s... I'd start to wonder if any of my work and presence had made an impact. When I feel depression advancing, I punch it back as best I can.  And depression has advanced a lot since spring of last year.  I felt invisible, lonely, unwanted...and that probably made me vulnerable to depression.  I'm positive I can turns things around for myself eventually. 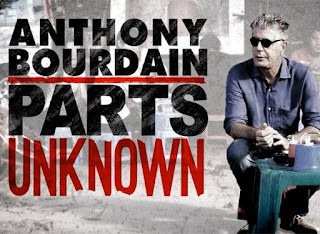 I would watch Anthony Bourdain host PARTS UNKNOWN and I always wished I could meet him.  He made me smile.  He entertained me, he educated me. He was an award-winning success. He was working on TV, the kind of work I love doing and pray I can do once again.  He made me wish I had a life like his. 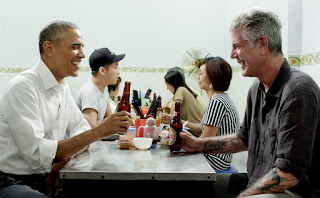 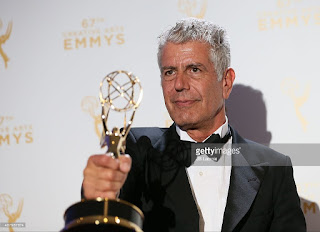 That is, until today.  Success is not a remedy for everything.  The biggest "parts unknown" were those rocky, rough and wounded places in his heart.  That poor man.  Heaven rest his soul.  He was quite a guy.  I will miss Anthony Bourdain.