Three of the best and brightest days of my entire TV career where the days when I had Carrie Fisher and Debbie Reynolds as guests on my VH1 talk show back in the late 1980s.  Carrie was one on show.  Debbie made two appearances. All three appearances drew big laughs and affection from the entire floor crew.  After Debbie had taped her second appearance with me, she hung around.  She stayed in the studio and stood behind one of my cameramen to watch me interview my next guest.  She didn't like my next guest.  She felt she was a cold fish.  The crew felt the same way.  So did I. Debbie was exactly like Shirley MacLaine as Doris Mann in the POSTCARDS FROM THE EDGE party sequence when she coaxes her actress daughter, Suzanne Vale, to sing a song for the guests.  I guess that's absolutely no surprise since Doris Mann was based on Debbie Reynolds in a screenplay written by Carrie Fisher.  The screenplay was based on Carrie's novel of the same name.  Now Debbie's son and Carrie's beloved brother has written a book.  He calls it a "love letter" and a "thank you note." 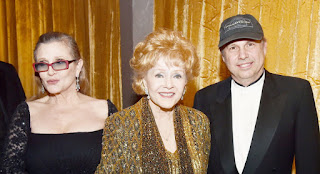 I have got to get his book.  I found out about it by reading a May 30th question and answer interview with Todd Fisher that Jamie Blynn conducted for usmagazine.com in the magazine's entertainment section.  His poignant answers made me misty-eyed.  If his answers did that -- like his answers about his final moments with his movie star mom after Carrie's untimely passing -- then his book will probably have me sobbing. 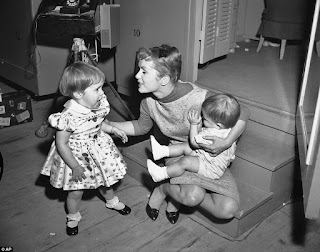 The title of the Todd Fisher memoir is MY GIRLS:  A LIFETIME with CARRIE AND DEBBIE.  It hits bookstores this month. 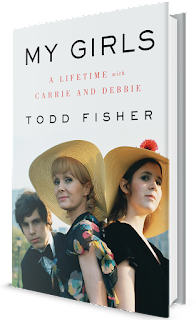 Debbie Reynolds had won a special place in my heart ever since I was a little boy and saw her on local TV in the movie SUSAN SLEPT HERE.  There were so many Saturday afternoons in my youth when I used my student discount card and enjoyed a Debbie Reynolds movie as a weekend matinee, movies of hers that don't often get mentioned but movies that gave me a lot of enjoyment as I sat in that air conditioned theater with some popcorn and a soda.  Movies like GOODBYE, CHARLIE and THE SINGING NUN...DIVORCE, AMERICAN STYLE and HOW SWEET IT IS.  When Mom surprised me with a reserved seat ticket to see THE UNSINKABLE MOLLY BROWN one Saturday afternoon at the Egyptian Theater in Hollywood, that was like an early Christmas Day.

I still feel that Debbie Reynolds was a terrifically talented yet under-appreciated Hollywood star.  She truly was a triple threat actress. She sang, she danced, and she could really act when given a chance to exercise her dramatic muscles.  Take another look at the steeliness of her New York City dance hall character in THE RAT RACE (1960) and the frustration of her Hollywood could-have-been character in WHAT'S THE MATTER WITH HELEN? (1971).  Debbie Reynolds should have been a Best Actress Oscar nominee for the wise, witty Albert Brooks comedy/drama MOTHER (1996) and, around that time, Hollywood should have honored Debbie with a special Oscar.  She worked tirelessly for decades to preserve Hollywood history acquiring classic costumes and props were museum-worthy.  She was Hollywood's top ambassador and she worked tirelessly to help others.  As Ruta Lee said at Debbie's memorial, Debbie gave and raised money to help the less fortunate.  She'd always say "You can never go wrong asking for something to help someone else."

As for Carrie, she was more than her internationally famous Princess Leia character from STAR WARS.  She should've gotten a Best Adapted Screenplay nomination for POSTCARDS FROM THE EDGE. She was brilliant writer with a crackling, devastating wit that made her novels and memoirs such fabulous and rich brain food. She was a terrific singer.  I wish she had recorded an album. And how we loved hearing about her colorful relationships with her always devoted mother and her not-so-devoted father, singer Eddie Fisher.

Carrie, wow...how I miss her.  Her quote "Take your broken heart, turn it into art" is very dear to me.

I've said it before and I'll say it again:  If a movie like TERMS OF ENDEARMENT about the often bumpy but close relationship of a mother and daughter in show business opened and, in the last act, the actress daughter unexpectedly died and the actress mother died the following day, seemingly of a broken heart, critics would have written snarky reviews tagging the movie as overly sentimental with an ending that was too hard to believe.

But it really happened in the life and love story of Carrie Fisher and Debbie Reynolds.  That's Hollywood.