SET IT UP for love on Netflix

I'm a classic film advocate who loves a good romantic comedy.  Whether it's Claudette Colbert or Ginger Rogers as runaway brides, Irene Dunne and Cary Grant in screwball tales of re-marriage, Rosalind Russell as the over-achiever career woman who falls in love with man she hired as her secretary,  Barbara Stanwyck as the con artist who falls for the guy she intended to scam, Doris Day and Rock Hudson or Tom Hanks and Meg Ryan as bickering rivals who fall in love...there are times when my heart needs to be lifted by an enjoyable romantic comedy.  After hours of watching soul-numbing national and international news reports, I craved something festive for Friday night viewing.  I gave SET IT UP on Netflix a try. 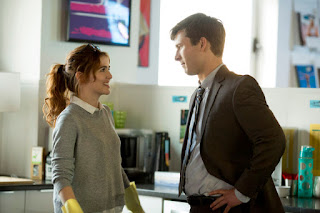 Never heard of it?  That's because it's new.  I'd just heard of it myself that afternoon on a film review show I streamed on my laptop.  Amy Nicholson, the guest critic on 89.3 KPCC radio's "FilmWeek," a Friday film review hour on AIRTALK hosted by Larry Mantle, had lovely things to say about SET IT UP.  So did another critic.  Amy Nicholson really tossed verbal roses at Zoey Deutch, the leading lady.  She compared her to Rosalind Russell.  I'd say she was more of a Meg Ryan type with a colorful splash of Tina Fey.  However, like Rosalind Russell, Zoey Deutch makes you smile and she wins your heart with her talent.

Two young New Yorkers work in the same midtown Manhattan deluxe office building as assistants to high maintenance bosses.  The assistants are practically nannies and party planners for these bosses, working so late on a regular basis that they have no social lives of their own.  The two assistants meet in a stressful situation, get the know each other and then hatch a plot.  Since each handles a boss' schedule, they will manipulate their schedules so that the bosses happen to meet and eventually start dating.  That way, maybe the two dating bosses will mellow out, ease up on their hyper office demands and give the assistants the ability to actually leave work a reasonable hour and have a social life.

Yes, the two will fall for each other after they've manipulated their bosses into a love connection.  Of course, they'll discover a serious glitch in their arranged love connection. 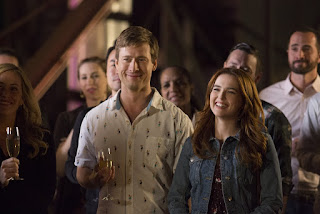 There's dialogue that would've given Hollywood censors heart attacks back in the day.  If you see it, be prepared to hear lines like "I can wake you with my penis," "I want to f**k this pizza" and "I'm sorry I was so cunty to you," delivered innocently.

Lucy Liu hits the right note as the high maintenance sports journalism publication boss who uses a bullhorn to proclaim orders in the office.  Taye Diggs is the other boss, a business whiz and a macho jerk in need of repetitive slaps like the kind Jack Nicholson gave Faye Dunaway near the end of CHINATOWN. 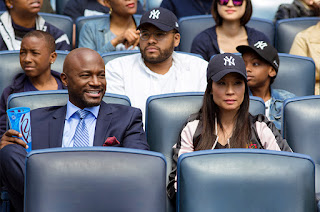 On the big screen, romantic comedies seem to have become a lost art in the last few years.  SET IT UP was made for Netflix and the two lead actors as harried assistants have something that I've missed in recent romantic comedy lead actors -- charm.  They have charm and warmth and chemistry.

This is not a romantic comedy that one can put on the same high shelf with classic films like THE AWFUL TRUTH, THE PALM BEACH STORY, THE LADY EVE, MIDNIGHT, THE MORE THE MERRIER, PILLOW TALK and ANNIE HALL.  But it definitely satisfies in that category we used to call a good "date night" movie.

This is the first feature film directed by Claire Scanlon.  Please, Hollywood, please give her more romantic comedy screenplays to direct.  The lead actors are Zoey Deutch as Harper and the handsome Glen Powell as Charlie.  Powell was excellent as astronaut John Glenn in the movie HIDDEN FIGURES.

SET IT UP is easy entertainment and it's easy on the eye.  I used to work near where the office is located.  I've seen Manhattan areas used as exterior locations in SET IT UP countless times in the 20 years I lived in New York.  Director Scanlon took areas that have been shot before and made them look new again with different angles and smooth editing.  She gave Manhattan a fresh look.  She gives us a fresh, modern romantic comedy.
I loved that Lucy Liu and Taye Diggs were the ulcer-causing bosses.  Those were race unimportant roles. However, ten years ago or more, they would've automatically gone to white actors.  Charlie, the assistant, is dating a self-absorbed high fashion model.  She's Puerto Rican.  Charlie's best friend is his roommate.  And the best friend is gay.  Openly gay.  No slave to fashion.  Just a cool regular guy who teaches middle school in the Bronx and loves his work.  This refreshing gay male image warmed my heart.  Duncan, the gay roommate, is played by Pete Davidson from SATURDAY NIGHT LIVE.  Like Oscar Levant with Gene Kelly in AN AMERICAN IN PARIS, Duncan is a devoted buddy who can deliver a killer wisecrack.

As did classic romantic comedies and musical comedies of Hollywood's Golden Age, SET IT UP gives us supporting characters who may have just one comedy scene but these funny characters just about steal that one scene they have.  In this, we have a very funny Tituss Burgess as the building maintenance engineer.  The shirtless man in the elevator, the waiter who never gets a tip from cash-challenged Harper and the lady at the jewelry store ... those were bright and funny bit parts played memorably.  Those are the kind of parts I've longed to do in movies.

Katie Silberman wrote the script.  There's a rooftop engagement party scene.  The fiancée gives a short speech that's a little piece of unexpected heaven.  What she reveals to her guests is so true about the nature of love -- and we get a sweet reminder of it at the end of SET IT UP.
at June 16, 2018