Because he's an international star who has been famous for most of his life, we expected that the business demands of his fame, and maybe traffic, would make him late by about 30 minutes.  We were all set up for him in the London studio and we prepared to wait in a relaxed manner.  Then we looked at the door and saw someone approaching.  The rock music icon whom we thought would arrive understandably about 30 minutes had arrived about 20 minutes early.  Alone. Without entourage and with lovely manners.  Paul McCartney, now Sir Paul McCartney, was absolutely gracious to every single person in our crew.  We did the exclusive interview in a London studio with an outstanding British TV crew.  As much as I recall this extraordinary opportunity in Spring 1989, a one-on-one interview, I recall Paul McCartney's kindness to every single person in the studio. 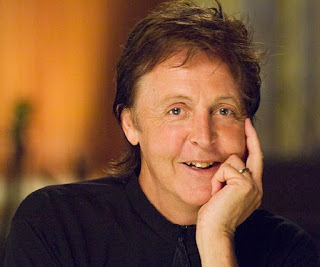 Happy Birthday, Sir Paul McCartney.  Thank you for writing some of the happiest, most most beautiful, most harmonious and most memorable popular songs ever composed.

In 1989, during my three wonderful years as a VH1 veejay and talk show host, VH1 flew me from New York to London to conduct this exclusive interview.  If you're a hardcore McCartney fan, I hope you find some of it enjoyable and that you learn a couple of things about him you'd never heard in previous interviews.  Remember, we did this in the late 1980s.  Here is my VH1 special with singer, songwriter, composer, musician and former member of The Beatles --- Sir Paul McCartney.

A note about diversity and inclusion, hot topics in today's entertainment industry.  I did not have an agent when I booked my VH1 job and became the network's first African American to have his own prime time weeknight celebrity talk show. My contract ended in 1990.  After that, and with this show among my credits, I pitched myself to be an entertainment contributor on CBS SUNDAY.  I pitched for years but I could never get a meeting or an audition.  I accepted job offers from local TV morning news shows in New York City, but executives didn't feel I had the skills to cover entertainment on a regular basis or to do film reviews on a regular basis in the studio.  I quit my WNBC TV job after three years because my boss told me that, although my work was good and I was very popular with viewers, I would remain local.  I had no chance of moving up to NBC network exposure.  Agents continued to reject me for representation saying, "I wouldn't know what to do with you."  I had to make my own luck. I did not have the same job opportunities as a Billy Bush, Tom Bergeron, Rosie O'Donnell (my former co-worker) or Mo Rocca.

I am not the only person of color who experienced that inequality.  There is still a great need today for race & gender inclusion.