My Dad the Betty Hutton Fan

I was lucky to have the parents that I did growing up in a very humble 2-bedroom, 1 bathroom house in South Central L.A.  There was no shortage of books and records in our house.  On our living room bookshelf were works by these authors:  Shakespeare, Sinclair Lewis, James Baldwin, Ray Bradbury, Harold Robbins, Francoise Sagan's Bonjour Tristesse, Peyton Place by Grace Metalious and stories by Ernest Hemingway.  Mom and Dad had 78s, those old record that came before 45s and long play albums that spun on the turntable at 33 1/3.  My record player handled those speeds. On weekends and during summer vacations, I loved playing Mom and Dad's old 78s.  Mom had a lot of the big band 1940s records.  Dad was into bee-bop jazz.  There was one record I loved.  A cute, upbeat vocal called "Doctor, Lawyer, Indian, Chief."  Betty Hutton had sung that to success on the charts.  It was a hit record that became closely associated with the Paramount Pictures musical comedy star of the 1940s and early 50s. 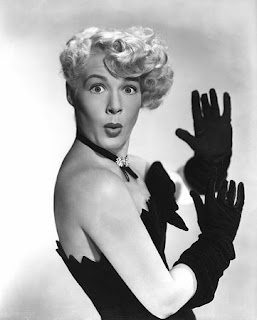 One day when I was in the brink of starting middle school (we called it "junior high school" then), I casually mentioned to Mom that I loved her old record of "Doctor, Lawyer, Indian, Chief."  Mom, with a very Thelma Ritter expression on her face, replied, "That's not mine.  That's your father's.  He had all those Charlie Parker and Dizzy Gillespie jazz records and then he had this thing for Betty Hutton. I could never figure that out. He loved Betty Hutton."

I knew what Mom meant.  Dad was a WWII veteran who served overseas in the segregated troops.  He got the home I grew up in thanks to the G.I. Loan. In his youth, he was a weightlifter.  Dad was brawny, burly man few words. He was polite but not exactly amusing and gregarious the way Mom was.  I took after Mom.  But I took after Dad in a love for Betty Hutton's work.  Here she is singing the song that became a hit from her movie THE STORK CLUB (1945).
Our parents, I'm the oldest of three, divorced when I was a nervous bookworm of a high school freshman.  The relationship between Dad and me grew more fractured and frayed.  Mom refused to ask for alimony.  She only wanted child support for us three kids.  But Dad couldn't keep up those payments.  He relocated to Canada for years.  I had college and a TV career on my mind. I was positive that I could get work in TV and make enough money to pick up the financial slack, to help out our divorced working mom.

Time passed.  Dad and I had not seen each other in 25 years.  There had been an occasional exchange of cards and letters, but we had not been face to face in a long, long time.  That changed in the late 1990s when I flew out to see him.  He'd moved to Seattle and was divorced from his second wife.  My reunion with dad was a bit awkward.  I love to hug and be hugged. Dad still wasn't the physically demonstrative type but he stretched out his arms as if under a hypnotic spell because hugging seemed to be the customary thing to do in such an occasion.  I could see discomfort in his eyes.  I extended my arms and walked over to hug him but we both looked like that robot on LOST IN SPACE when he started announcing, "Danger, Will Robinson!"  Four arms just flailing about.  Eventually we settled down and started to talk.  Our conversation kicked off with a disappointment.  Dad tried to flatter me.  Keep in mind our visit was during some vacation time I'd taken from work.  I'd been working for a few years on Fox5's live local weekday morning show called GOOD DAY NEW YORK.  Dad said he'd been watching me on TV.  But he was in Seattle.  I pressed him on how he was seeing me.  Did a relative send him VHS copies of me?  "No," he replied.  "I watch you late at night some times with all those comedians."

Dad had been watching Byron Allen on his late night syndicated show. Not me.  I left our reunion frustrated.  He was still a man of few words.  I was still with my "little boy" feeling that I'd never have Dad's full attention, a fact I'd just have to accept.  At least, we had reunited.

In 2000, I was working on a live Lifetime TV show, an hour-long magazine show produced by ABC News.  I was the Friday movie reviewer and entertainment editor.  I got a call one day from my cousin that Dad had been seriously ill but was on the mend.  I hadn't talked to Dad in quite some time, but I called as soon as I could.  Not only was Dad on the mend -- but he was chatty!  Never in my life had I known Dad to be so talkative and bright-sounding on the phone.  He was thrilled to hear from me.

It gets better.  He said "I've been watching you on Lifetime TV!"  I had not told Dad about that job, but he found out about it and watched me every Friday.  Our frayed and fractured relationship had healed. We talked. We laughed.  The very last words he heard from me were a response to something he'd said.  My words were "I love you too, Dad."

He died six months later in his sleep in the middle of a week.  The last TV appearance of mine he saw was my Lifetime TV segment.  On that day, I talked about a new video release.  It was the long unavailable classic MGM musical from 1950, ANNIE GET YOUR GUN -- starring Betty Hutton.  I'm positive the last time Dad saw me on TV, I made him smile when I showed Betty Hutton singing a show biz anthem that means a lot to me now.  Our story had a happy ending.  Happy Father's Day.