I do not mean domestic chores in that title.  In the Meryl Streep movie, her character roots out crimes in the White House.  In the Jodie Foster movie, her character saves a young woman being held hostage by a psychotic killer in a big creepy house,  I've been a Meryl Streep fan ever since she had major role in the NBC's 1978 mini-series HOLOCAUST followed by films such as THE SEDUCTION OF JOE TYNAN and KRAMER VS. KRAMER, both released in 1979.  She's got three Oscars and about a hundred Oscar nominations to her credit.  With all that, she is at her absolute best in Steven Spielberg's THE POST co-starring Tom Hanks.  This 2017 newspaper drama, based on a true story, brought her a Best Actress Oscar nomination. But of course. 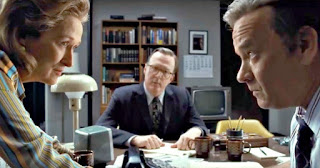 Jodie Foster won her second Best Actress Oscar for Jonathan Demme's THE SILENCE OF THE LAMBS.  Recently, I watched that 1991 crime thriller on HBO.  Man, what a performance Jodie Foster gives.  It's so gripping, so focused, so full of complexity and intelligence. 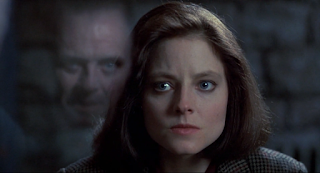 Both female lead characters are in a similar gender situation in which their strength and intelligence and courage -- their brass ovaries, if you will -- are vital even though some men in their immediate workplace environment may not realize it. 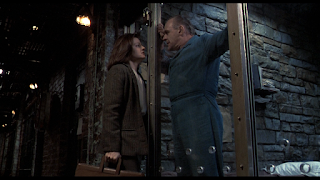 First of all, I wish more people had gone to see THE POST.  I felt it was one of last year's best films.  I have a buddy named Charles P. Pierce, a whip-smart and insightful politics and sports journalist who writes for Esquire.  Charlie's got over 100,000 followers on Twitter.  He and I were on the same dorm floor in college.  Charlie hung out many times in my dorm room and I hung out in his.  I saw then that he had the fire for political journalism in his bones. One of the most popular new films with students on campus was Alan Pakula's ALL THE PRESIDENT'S MEN.  Young movie goers headed to see that 1976 drama, based on a true story we'd lived through, as enthusiastically as todays young audiences flock to see new movies from the Marvel Comics franchise of superheroes.  Enrollment in Journalism Schools increased thanks to the popularity of ALL THE PRESIDENT'S MEN.  The drama at The Washington Post that we see in Spielberg's THE POST happens before the drama we see in ALL THE PRESIDENT'S MEN.

Before I go on to the similarities shared by the two female lead characters, let me tell you that Charlie Pierce went into journalism to do the serious, hard, gritty work -- the kind you see in both movies.  Back in 1976, a lot of other guys on campus went into journalism really because they wanted to be more Robert Redford and Dustin Hoffman than reporters Bob Woodward and Carl Bernstein.

Meryl Streep plays Katherine Graham, the first woman publisher of a major U.S. newspaper.  But her Washington Post is behind The New York Times.  The New York City competition broke a major story about the Pentagon Papers -- shady business going on in Nixon's White House -- while The Washington Post was covering celebrity weddings.

Katherine inherited the job. She loves the paper, employees at work like her, but she really has not found her voice in the job.  Ben Bradlee, played by Tom Hanks, is the ballsy editor who wants to beat The New York Times.  As Katherine and Ben dig in it becomes obvious that Nixon is corrupt.  They are threatened with prison time if they keep doing their work as journalists. 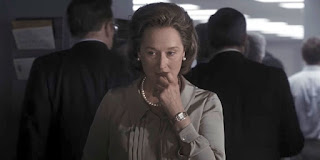 As they get closer to the heat of Nixon's fire, Katherine finds her voice as the publisher.  She will tell us that "News is the first rough draft of history."
Jodie Foster as Agent Clarice Starling.  When we meet her, she's in the male-dominated FBI training program.  She's a cadet, an outstanding trainee.  She's constantly surrounded by men.  In the office, in the elevator, in the hallway and when she walks down the row of convicts to meet Dr. Hannibal Lecter.  Clarice is always in the up close view of the male gaze.   Just like Clarice, Katherine Graham is also surrounded by, outnumbered by men in her work situations. Sometimes we see that she's the only woman in the room -- and the men do not listen to her even though she's the boss.  They talk at her or around her, but they do not actually listen to her and consider her opinion.  This will change.

Tom Hanks as Ben Bradlee is to Katherine Graham in THE POST what Dr. Lecter is to Clarice Starling in THE SILENCE OF THE LAMBS.  Both men respect the woman.  They see her intelligence.  They see that she is the gender outsider.  They push her to take her power up a notch and uncover the crime.  They push her to take on the monster in the house who is breaking the law, whether the house is a big creepy one that has a woman being held hostage underground...or the White House where the Constitution is being abused.

Notice those similarities.  Women find their power, their voice in a male-dominated workplace in THE SILENCE OF THE LAMBS and THE POST.  These two fine films are worth a look -- another look if you've already seen them.
at June 12, 2018