He doesn't know it, but Tom Hanks helped me through one of the most heartbreaking, emotionally difficult mornings of my life.  Later that day, millions of folks would be glued to TV screens watching an NBA playoff game and the now-famous police chase of a white Bronco driven by O.J. Simpson.  For me and an army of entertainment press booked in The Four Seasons Hotel in Los Angeles, the early morning kicked off a work day -- a day of interviews for the FORREST GUMP press junket.  FORREST GUMP, a big Paramount feature starring Tom Hanks. 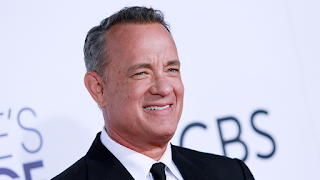 I was scheduled to interview Tom Hanks around 10:30 that morning.  I'd read the novel, I'd heard high praise for the movie from publicists in New York City who worked for rival film companies.  I definitely wanted to interview Tom Hanks, a man who has been one of my favorite actors ever since I was a devoted fan of BOSOM BUDDIES, his ABC sitcom back in 1980.  I jumped at the offer to participate in the FORREST GUMP junket.  I'd do the interview for the weekend morning show on local WNBC. I was a regular on the show from its September 1992 premiere until I quit.  You probably know this already if you've read my posts frequently.  Let's just say that my experience working for a few executives in the WNBC news departments was rocky for me.  At that time, the station had yet to fully embrace diversity and inclusion.  In October 1992, I went out on a date with a courteous young white Southern Baptist gentleman named Richard.  He asked me out.  Initially, I had no interest in going out but I figured, "What the heck. It's just brunch at a café.  I can be done in two hours."  That first date changed my life. It started my first romantic relationship.  We had brunch and I stayed with him until the day he died.

This was during the extremely dark and politically turbulent days of the AIDS crisis.  Richard had a good job and thought he was in good health -- until Christmas week of 1992.  At first we thought he had the flu. A few days later, I sensed something worse was happening.  I got him to the hospital.  Come the New Year, he'd been diagnosed with full-blown AIDS.  He'd been laid off from work.  I became his main caregiver in New York and kept in touch constantly with his wonderful relatives down South.  My situation at WNBC had been so frustrating that I planned to quit in early December.  But, when Richard took ill, I needed the job and part-time income to help me pay the rent and care for him.

A few days before I had to fly out to L.A. for the junket, Richard had some medical problems. I had to get him to the hospital again.  I was going to cancel my junket plans but he was adamant.  "Go do your work.  Don't worry about me.  My doctor is here.  Go do your work, he said."  His doctor called me with news that she was quite sure he'd be fine when I got back from L.A.  She also told me not to worry.

Tom Hanks' work was special to Richard and me.  We had a great date night at a preview screening of SLEEPLESS IN SEATTLE.  He held my hand and got tears in his eyes when Hanks won his Best Actor Oscar for PHILADELPHIA.

I knew a few other men in the TV newsroom who were also gay and confided in them that my partner had been diagnosed.  They all urged me not to tell management, to keep quiet about it.  I replied, "I'm in good health, thank Heaven. It's my partner who's sick."  They said, "Nevertheless, management could still find a way to not need you anymore."  I wasn't under contract so I put stock in what those newsroom veterans told me.  On the TODAY Show, Katie Couric had the freedom to talk about her late husband's battle with colon cancer.  She could do segments on what she'd learned about the illness, segments that could help others.  I could not do TV news segments on what I'd learned as an AIDS caregiver and pass that information on to others who may have been in the same situation.  And I wanted to.  I know others were in a similar caregiver situation.

That's how things were then.

I was in my Four Seasons hotel room, going over my notes for the FORREST GUMP on-camera interviews I'd be doing.  A half hour before I was to head upstairs to see Mr. Hanks, my phone rang.  It was Richard's doctor calling from New York.  She began with "Don't panic."  He had not been responding to medication the way she'd hoped.  She felt I needed to call his parents.  There was not much more she could do aside from making him as comfortable as possible.

Time just seemed to stop. I went numb.  That was a call I prayed I'd never have to make but knew I, one day, probably would.  I called his mother.  She was calm and focused.  She said she'd take care of alerting the other family members.  Then, as always, she asked how I was. I hung up an then prepared to cancel my interviews and catch the next flight I could back to New York after explaining why I had to pull out of the junket suddenly.  The phone rang again.  Again, it was Richard's doctor.

"Richard ordered me to tell you to do your work.  Do not come back until you've done your work.  He's serious about that."

I had to stop crying, pull myself together, gather my notes, make sure I looked presentable and go to Tom Hanks' interview room.  I would ask a question about PHILADELPHIA, a question to address the discrimination gay people endured.  I'd ask it for Richard.  I'd ask it because my news director boss refused to air my taped interview of Harvey Fierstein, a good interview in which he was promoting MRS. DOUBTFIRE.  He refused to air it because, in his words, "I have a problem with him being openly gay."  He said that in a New York City TV newsroom.

My head felt foggy when I entered Tom Hanks' room and I was so heartbroken I felt I as if I was walking in slow motion.  Tom Hanks, standing and displaying a big smile said, "Bobby Rivers! I remember watching you on VH1!"  His enthusiasm, his graciousness, his warm greeting instantly snapped me out of my emotional pain and focused me on the work to be done.  I got through that interview day thanks to Mr. Hanks.

My PHILADELPHIA-related question to Tom Hanks is in this reel (the phone number you'll see is out of service):
Tom Hanks went on to tell me that he wouldn't have been surprised if he never again played the guy who fell in love with Meg Ryan had he been gay and came out in his Oscar acceptance speech.

I did the interviews and flew back that night.  I got to Richard's beside at the hospital.  One of his first questions was "How'd you do with Tom Hanks?"  Richard's parents were there.  He and I had some precious time together.  He even broke me up laughing.  Richard passed away peacefully the afternoon of June 20th, 1994.  Tom Hanks won his second Best Actor Oscar for FORREST GUMP. 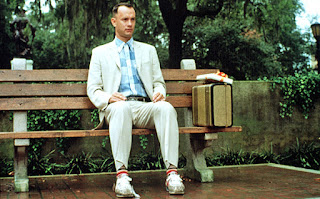 In January 1995, when I'd made enough to pay off Richard's funeral expenses, I mailed the check and wrote my brief letter to my WNBC boss giving him my two weeks' notice.  I saw Tom Hanks again,  unexpectedly, when I was having absolute joy with a small, ragtag camera crew. We worked on a local cable show and happened to shooting near the red carpet function for THE GREEN MILE. We were taping the red carpet activity for extra footage on our show but we never expected to see Tom Hanks while our camera was rolling.  He was sporting a beard for CAST AWAY shoots. 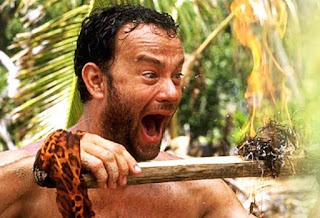 It's Pride Month.  Never take your freedoms for granted.  Never let anyone treat you like a second class citizen.  Help others when you can.  Happy Pride Month.