Let's face it.  Movie screens today have been overbooked with caped crusaders and outer space characters from a galaxy far, far away.  The romantic comedy, once regular fare from Hollywood, seems to be an art form that needs resuscitation.  There's a hashtag on Twitter that I just discovered about six week ago.  It's # FemaleFilmmakerFriday.  On Friday, people tweet about women directors past and present.  Lately, I've been craving a good romantic comedy and there isn't one at the nearest movie theater.  Fortunately for me, HBO aired one -- one from a woman director who I've not seen mentioned for FemaleFilmmakerFriday on Twitter yet. And she should be mentioned.  Nora Ephron directed Meryl Streep to one of her many Best Actress Oscar nominations (2009's JULIE & JULIA). Nora Ephron co-wrote and directed two of the best and most successful romantic comedies of the 1990s.  America loved Tom Hanks and Meg Ryan as sweethearts in 1993's SLEEPLESS IN SEATTLE and 1998's YOU'VE GOT MAIL.  The 1998 box office hit, a modern-day remake of and valentine to Ernest Lubitsch's THE SHOP AROUND THE CORNER (1940), aired on HBO.  Love, as co-written and directed by Nora Ephron, is a wonderful thing. Seeing YOU'VE GOT MAIL again was like visiting a cherished longtime friend. 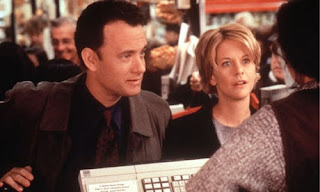 Another cable station aired SLEEPLESS IN SEATTLE.  I watched that too.  My spirits were lifted. 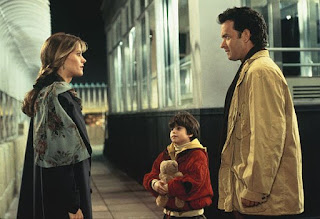 As did millions of other moviegoers, I saw both films in their original theatrical release.  In fact, I paid to see each movie more than once.  I was that entertained.  This weekend, after I'd watched them again -- and it had been quite some time since I'd seen them -- my love for those two romantic comedies increased.  It had grown.  Why?  Because, over time, I've grown into feelings that the male and female lead characters had.  I was not just looking at them and laughing, I was feeling along with them with an understanding of why they acted and reacted the way they did.

The first time I saw SLEEPLESS IN SEATTLE, I was a bit jealous.  Tom Hanks is one of my all-time favorite actors.  I became a devoted fan way back when he was dressing in drag on the ABC sitcom BOSOM BUDDIES.  That sitcom was Must-See TV to me when I had my first professional TV job.  I worked on the ABC TV affiliate in Milwaukee.  By the time SLEEPLESS IN SEATTLE was released, I had 3 years of VH1 on-air work to my credit, work which included hosting my own talk show and doing segments with fellow VH1 veejay, Rosie O'Donnell.  The best friend supporting role she had in SLEEPLESS IN SEATTLE was exactly the kind of work I hoped to book after my VH1 years.

Two years later, he had died.  So now when I see SLEEPLESS IN SEATTLE, I see the rage and heartbreak of the Hanks character in the first 20 minutes, the heartbreak that motivates the widower dad to move himself and his little boy to Seattle so we can experience the loopy romantic comedy with Meg Ryan that'll happen once he relocates.  SLEEPLESS IN SEATTLE opens with grief.  A grief I now understand because I loved someone as much as Sam Baldwin (Hanks) loved his wife.

As for YOU'VE GOT MAIL...wow.  That was only 1998. Yet, it was before cellphones, text messages, DVRs and social media the way we know it today.  You could still find a studio apartment in Brooklyn for under $1000 a month back then.

Joe Fox (Hanks) is a big, successful businessman. He's corporate owner of a Foxbooks chain store that's gobbling up the independent "Mom & Pop" bookstores in New York City.  Ryan's character runs a beloved little indie bookstore on the Upper West Side.  They are rivals in local news features.  However, they have no idea that -- with anonymous screen names -- they are online buddies on AOL.  They are online buddies who are revealing their hearts to each but not their real identities. 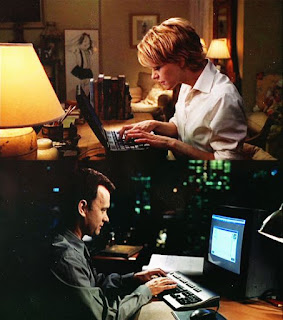 At a coffee shop meeting, where she has no idea he's her online friend, she hits Joe Fox right in the heart with a critical remark.  She says "You're just a suit" and goes on to tell the corporate hotshot that, although she's an employee at a small neighborhood shop, that shop made a personal connection to people.  It's beloved. People fondly remember her late mother who opened the store.  It's called The Shop Around The Corner.  Joe Fox may win but he won't be remembered fondly like her mother is, like her store will be, because he's just a suit. 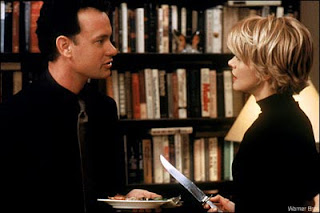 That jars him. I understood how it jarred him.  I came to New York to find a career and love.  I wanted to do some work, be so talented, that I would be remembered fondly.

The last few years for me have been full of occupational potholes and bumps.  I never made really big money but performing on TV was work I loved.  Work that enabled me to keep a roof over my mother's head.  One show I worked on was cancelled in 2008. A bunch of us, except the star, were out of work.  I didn't find another regular job until 2010 and then, a month after I started, the Recession hit that job too.  Another lay-off.  I went flat broke. My emergency fund had gone to help my mother.  I could not find new steady employment.  I lost my studio apartment and most of my belongings in it. I had to leave New York City to live with a kind-hearted friend out West while I attempted to start over.  In the last year of his life, Richard lived with me in that studio apartment. Leaving it and leaving New York City crushed my heart.  When Kathleen Kelly (Meg Ryan) makes the difficult decision to sell The Shop Around The Corner, she sends her online friend a message -- and I fully understand how she felt:

"...But the truth is, I'm heartbroken. I feel as if a part of me has died, and my mother has died all over again, and no one can ever make it right."

I miss New York City.  Even more, I miss having someone in my life whose face lit up every time I entered the room.

In YOU'VE GOT MAIL, Kathleen's beau is an intellectual newspaper writer who seems to spend more on his column than he does with her. When her shop has closed and they are politely, mutually breaking up, he asks her if there's someone else.  She replied, "No, but there's the dream of someone else."

I know that feeling too.