The top reason why I wanted to see DEADPOOL a couple of years ago is because I read so many comments on Twitter from moviegoers saying how much they loved the blind black lady in the movie with Ryan Reynolds.  Then I read one tweet with the message that the actress was Leslie Uggams.  "Leslie Uggams!" I said out loud.  Yes, Leslie Uggams.  The groundbreaking African American singer/actress who, thanks to Mom and Dad, I'd followed on TV ever since I was in elementary school.  When I finally got around to seeing DEADPOOL, I saw that the folks on Twitter were absolutely correct. Leslie Uggams rocked that role of Blind Al.

On Monday, I let out a "Wow!" when I saw her in a shot on ABC's GOOD MORNING AMERICA.  Six of the DEADPOOL 2 cast members were present for a live in-studio group appearance to promote the opening of the sequel.  I assumed that Ryan Reynolds would be present, but no announcement had been made that Leslie Uggams was also in the bunch.  There is some golden TV and Broadway history in her bio.  It's Black History. 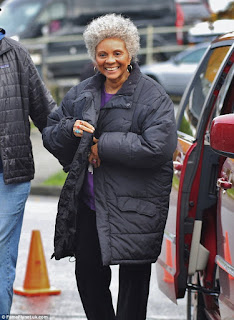 Personally, as a TV veteran, I don't like when the celebs are in a group like that for an interview -- especially on a live network morning show where time is limited and you have to make room for a cooking segment.  With a group of six, like the DEADPOOL 2 group on Monday, you have to ask a general question that will get short answers or do something gimmicky like give them pads and pens and ask, "If you were really a superhero who could fly, what color would you cape be?"  Then you let the celebrities write down answers and hold them up to the camera.  Ryan Reynolds and Josh Brolin gave individual verbal answers. So did a couple of the new young stars.  Leslie Uggams didn't get a direct question and no major mention was made of her previous credits. 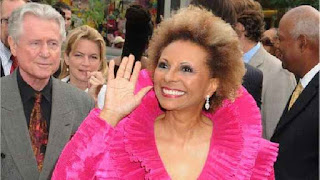 Before I give you some background about Ms. Uggams, here's a trailer for DEADPOOL 2.  Watch the volume.  There's naughty language in it.
Back in the early 1960s, when Leslie Uggams was a talented girl and American was still grappling with Civil Rights, she was the only black talent on a very popular Friday night NBC show hosted by the influential musician and record producer, Mitch Miller.  The music variety show was called SING ALONG WITH MITCH and she was a regular talent on the show.  Keep in mind it was rare then for a black person to get a network guest appearance.  Mitch gave Leslie a regular gig.  And this was during a decade when network TV execs did not want black and white artists touching each other in a friendly way for fear of losing sponsors.  NBC execs considered Dr. Martin Luther King a radical and didn't want him on the TONIGHT SHOW with guest host Harry Belafonte.  Harry overruled them and Dr. King did appear.  NBC ordered Petula Clark not to touch Harry Belafonte as they sang a duet on her NBC special.  She defied NBC brass and held Harry's arm as they sang.  Both those NBC shows happened in 1968 alone. No sponsors were lost.  Leslie Uggams was a TV trailblazer who broke through a color barrier in the early 1960s.  With her full, thrilling voice and down-to-earth sophistication, she was Must-See TV in our South Central L.A. community.  She made us proud. 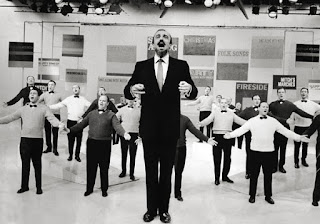 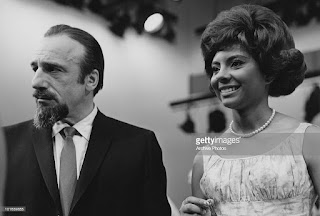 Years later, she was the second African American woman to win the Tony for Best Actress in a Broadway musical.  The play about a young woman in South Carolina who's determined not to be a maid -- determined to have a show business career and persevere through the Great Depression, World War II and into the dawn of the Civil Rights era was called HALLELUJAH, BABY!  Here's Leslie Uggams performing on THE ED SULLIVAN SHOW.
1967's HALLELUJAH, BABY! should have been made into a Hollywood movie.  But this was the 1960s. Hollywood studios couldn't take that story and change the lead female character into a spunky white girl played by Julie Andrews or Ann-Margret.  Diahann Carroll, the first African American woman to win the Tony for Best Actress in a Musical, should've also done a Hollywood version of her Tony-winning performance.  She starred in NO STRINGS, a 1962 musical with a score by the famed Richard Rodgers.  Richard Kiley was her leading man.  Diahann Carroll played a Harlem native who is a high fashion model living and working in Paris.  She has more racial freedom there.  She meets a Pulitzer Prize winning novelist who's sort of drifting through France.  A fellow American in Paris, he's white and has writer's block. He starts to come out of his creative slump when he meets and falls in love with the high fashion model.  But can those two take their interracial romance back to the States the way things are there in those turbulent early years of the Civil Rights movement?

Paris, high fashion, beautiful music by Richard Rodgers -- this could've also made a good movie.  I recall reading an entertainment news item about NO STRINGS in THE HERALD EXAMINER when I was a youngster.  There was brief Hollywood interest in making a movie version -- if the Diahann Carroll character could be changed from black to Asian.  It never got made.

Go to YouTube and play "The Sweetest Sounds" from the NO STRINGS original Broadway cast recording.  That's the gorgeous love song Diahann Carroll and Richard Kiley introduced in the musical.

Leslie Uggams was also a major character in the historic 1977 network mini-series that became a cultural landmark and a ratings champ -- ROOTS based on the book by Alex Haley.  It aired on ABC.

My friend Keith Price said that maybe the GOOD MORNING AMERICA team of segment producers is so young that the members don't know about Leslie's ABC connection.  I think they're probably so young, they don't even know about Ryan Reynolds' ABC connection.  Remember his sitcom TWO GUYS, A GIRL AND A PIZZA PLACE in the late 90s?

There you have it. Some Black History, Broadway History and some background on Leslie Uggams before millions of DEADPOLL fans have come to know her as Blind Al.