When fans speak or write their praise of the late, great Billy Wilder, the films of his that usually get mentioned are THE APARTMENT, SOME LIKE IT HOT, SUNSET BLVD. and DOUBLE INDEMNITY.  A film that doesn't get a much mention is his socially sharp 1966 comedy THE FORTUNE COOKIE.  It's one of my favorite Billy Wilder movies and it's another one of his films that has a big twist of Lemmon.  Jack Lemmon.  THE FORTUNE COOKIE is, in movie history, famous for giving us the first teaming of Jack Lemmon and Walter Matthau.  Matthau won a Best Supporting Actor Oscar for his terrific performance as the slick, crooked brother-in-law lawyer called "Whiplash Willie" to Lemmon's injured TV cameraman character, Harry Hinkle. 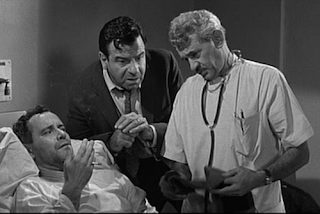 Lemmon played a CBS TV cameraman shooting on the field shooting a game for a live telecast.  He gets accidentally tackled by one of the star players for the Cleveland Browns.  The poor cameraman has to spend some time in the hospital.  The football star feels terrible about the accident and visits him I\in the hospital.  The brother-in-law lawyer smells money and suckers the cameraman into pretending he's severely injured and into using a wheelchair that he really does not need so they can scam the insurance company for a hefty amount of money.  We look at scruples in the workplace via the screenplay by Billy Wilder and I.A.L. Diamond.

Harry is single, a divorced man who still carries a torch for his ex-wife, a sexually generous blonde with ambitions of being a nightclub singer.  Poor Harry never realized that she was a selfish user just like Willie.  Willie secretly recruits her into his insurance scheme.  She'll connive her way back into Harry's heart so he'll fall in line and do as Willie orders.  She'll do this for a share of the money. The insurance company has two private eyes observing the injured cameraman.

To me, this is a Billy Wilder Civil Rights era comedy.  It's another Wilder film that makes a strong observation about something, something that is not the main action of the narrative but certainly gives it some juicy added texture.

Look at SUNSET BLVD.  That is a show biz tragedy that could have only happened in L.A.  Los Angeles is car culture and, in the 1950s, Hollywood players in any area of the business needed a car like they needed legs.  In New York City, you have can a life and career without a car.  Look at the theater folks in ALL ABOUT EVE.  Manhattan had subways, taxis and busses to transport you.  L.A. didn't have a subway system.  SUNSET BLVD. opens with cop cars speeding up Sunset Boulevard, sirens blaring, at about 5:00 in the morning.  We will meet three main characters.  Each one will be driven to a point of irrational or irresponsible behavior because of a car.  Struggling screenwriter Joe Gillis is behind on his car payments. He'll speed away from two guys sent to repossess his car and hide it in a stranger's garage.  He'll meet Max, a once-famous silent screen director who is now a Hollywood butler and chauffeur.  He became a chauffeur after he had a breakdown and couldn't bear to be away from a woman he loved. A married woman.  That woman is the rich and faded silent screen star, Norma Desmond.  Max discovered her, directed her and made her a silent screen star in the 1920s.  Norma Desmond is now 50.  When Paramount Studios calls, she thinks she's being contacted to make a comeback.  No.  The studio wants to rent her antique car that Max drives.  This will flip her out.

A car brings those three characters together -- and a car will cause each one some major humiliation in Hollywood.

THE FORTUNE COOKIE came out three years after America watched the day-long live network news telecasts of Dr. Martin Luther King's March on Washington.  Remember when people like ABC News' George Stephanopoulos said that maybe American had become "post-racial" because we elected Barack Obama president?  Barack Obama served for two terms but we definitely learned that America had not become "post-racial."  We're really seeing it with this current presidency.  There's still a need for racial tolerance and equality.  THE FORTUNE COOKIE subtly shows that racism was not exclusive to the Deep South.  Racism lurked up North in offices and homes in cities considered to be Liberal.

Harry the cameraman was accidentally tackled by Luther "Boom Boom" Jackson.  The cameraman is white.  The football star is black.  Luther is a handsome, young and dapper athlete and a gentleman.  He looks like he could leave the football field and has success in the broadcast field as a TV host.  As a favor to his injured buddy, he drives to the airport to pick up Harry's ex-wife when she flies into town.  He's black and driving.  Sandy, the ex-wife, assumes that he's a hired chauffeur. 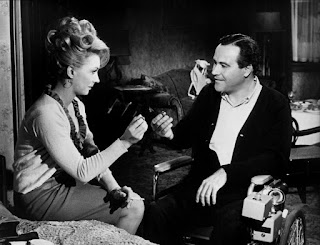 Pay attention.  Little things like that while the Harry and "Boom Boom" friendship gets tighter are key.  Racism will be the thing to ignite Harry's rage and force him to do the right thing.  Harry is a TV sports cameraman who supports a level playing field.

I love this Wilder comedy.  I love the almost subliminal way he leveled the playing field.  In Hollywood films of the 1930s and 40s, whenever you saw New York City office scenes...you saw white people as the office workers.  Black actors were maids, butlers, janitors, railroad porters and such.  Look at New York City office scenes in CHRISTMAS IN JULY (1940), LAURA (1944), THE SECRET LIFE OF WALTER MITTY (1947), ADAM'S RIB (1949) and THE BEST OF EVERYTHING (1959).  Notice the number of black people -- men and women in business attire -- who work for Consolidated Life on C.C. Baxter's floor in THE APARTMENT (1960).  C.C. Baxter has albums by Ella Fitzgerald at home in his record collection.  We see it.  When Fran Kubelik meets Mr. Sheldrake for a drink, notice the warm greetings she gets from the Asian workers in the restaurant. It's a mutual feeling.  But, to Mr. Sheldrake, they're practically invisible.  Mr. Baxter and Miss Kubelik embrace diversity. 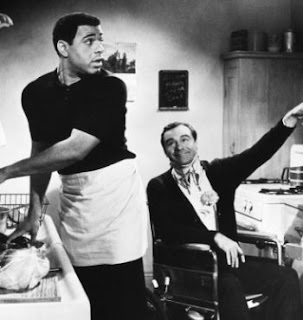 Luther "Boom Boom" Jackson was played by Ron Rich, a man who was very easy on the eye but...bless his heart...an actor who was, at best, adequate.  He's very personable but I watch the movie now and wonder what a black actor of more range we know today like a Blair Underwood or Ving Rhames could've done with the part.  I'm sure Ving Rhames would've  jumped at the chance to do it.  He loved Jack Lemmon.