What Would Harvey Milk Have Said About That?

MILK.  It was another of the many times I gave thanks to SAG-AFTRA, my union.  As a member, I was lucky enough to get an invite to a preview screening of MILK, the 2008 biopic starring Sean Penn as Harvey Milk, the slain openly gay San Francisco politician.  Harvey Milk, one of America's top gay activists, was elected to San Francisco's Board of Supervisors.  He and the city's Mayor George Moscone were shot and killed in San Francisco City Hall in 1978.  They were shot by a disgruntled former member of their Board of Supervisors. This hate crime, this assassination is in the movie, MILK.  Victor Garber (right) co-starred with Penn as Mayor Moscone. 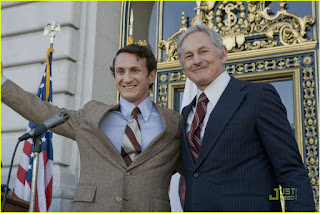 My first professional broadcast job, after I graduated from college in Milwaukee, was on radio.  I was the new morning news reader for an FM rock radio station in that same city.  I read news reports about Harvey Milk's activism and the public campaign of former Miss Oklahoma pageant winner/singer Anita Bryant.  Bryant, in those days, was a very popular singer who got lots of national TV exposure singing in commercials as the pitchperson for Florida orange juice. Then she waged her Christian campaign to ban gay people from working as teachers on Florida schools.  If you're too young to remember those days, you can well imagine how much network news coverage she got in her opposition to Harvey Milk.  Then one day on the air, I read the bulletin that Harvey Milk and Mayor Moscone had been shot and killed. 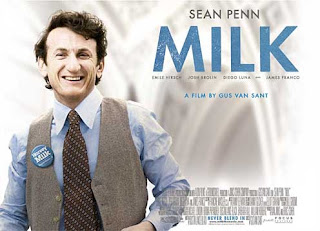 I was gay but not publicly out in my early radio days.  Why?  For fear of losing that job...a job I really needed.  Come 2008, I was publicly out.  I was on national radio in New York City working with Whoopi Goldberg.  Our crew, including Whoopi, participated in an AIDS Walk New York.  On Whoopi's show, I told how the GMHC (Gay Men's Health Crisis) fundraiser is very dear to my heart because, in the early 90s when my late partner was diagnosed, the GMHC gave me great counseling in how to be a better caregiver in those dark days of the disease.

The Recession hit -- and I was hit hard.  Twice.  Whoopi's radio show was cancelled. A bunch of us were out of work.  It took me a little over a year to find a new job -- and then that job went belly-up with layoffs.

Hard times forced me into a spot of needing to accept a friend's invite to live with him in San Francisco and attempt to start over.  I lived in San Francisco for most of 2011.  I lived in his apartment which was about a 15-minute walk from City Hall. In fact, we could see City Hall from our window.  I'd gaze at the beautiful building and think about the gay history of Harvey Milk.

I pitched myself to local TV stations for work.  Before doing so, I did what I usually do before pitching my services to a TV station.  I watched the station to get a feel for its tone, the diversity and style of its on-air team and overall quality.  I do this homework to see where I could fit in.

Here's what hit me in the face like a big splash of ice water.  There was no openly gay reporter or contributor doing features on local San Francisco Bay Area television.  San Francisco.  The home of Castro Street.  The place where Harvey Milk started his forceful gay activism.  A city The Village People sang about.  Not that there weren't gay people working at the stations. I met one lovely gent who did a weekly restaurant segment on a station's news programs.

But, in June -- which is Gay Pride Month -- there was no openly gay contributor on a Bay Area local TV news station reporting on Gay Pride Month issues and activities.  Again, this was 2011.  How would Harvey Milk have felt about that?  He fought hard for our visibility and equality.  But there was no one openly gay and bringing LGBT visibility via features for a newscast in his city.  We had gay contributors do features on AIDS prevention and Gay Price Month events for the popular all-news local cable station NY1 (New York One) back in New York.

However, I did get meetings so I could pitch myself.  Some executives were aware of my national gigs on Food Network and VH1.  That was nice. I did get any of the "Have you ever done TV work?" ignorance that I'd gotten two years before when I met with agents and network news producers in Manhattan.

I wonder if that's changed on local TV in the Bay Area since I lived there in 2011.  Is there someone openly gay doing informative and helpful features on the LGBTQ community?  I'd like to know.