My Random Notes on ROSEANNE

Did I watch the reboot?  Yes. The first three episodes.  And the main reason I watched was to see that terrific actress, Laurie Metcalf.  The ROSEANNE cast boasted two Oscar nominees -- Estelle Parsons, Best Supporting Actress winner for BONNIE AND CLYDE (1967), and Laurie Metcalf, Best Supporting Actress Oscar nominee for LADY BIRD.  I was not that excited about seeing the star who, reportedly, is quite rich and lives in Hawaii.  A few years ago, my jaw dropped down to my computer keyboard when I read some of her comments on Twitter.  I was surprised to see how conservative she is.  Not like the working class character she played on TV. 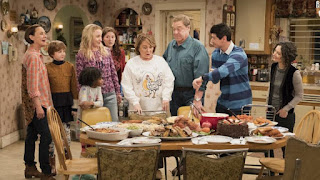 Her online slams against President Obama and liberals were pretty pointed. But, it seemed, she'd retired from TV work.  When the news of the ROSEANNE reboot hit, I noticed that she stopped tweeting.  Especially after the follow-up news that Roseanne Conner would be a Trump supporter.  To me, that explained the controversial comedy star's Twitter absence.  Personally, when I read that Roseanne's rebooted TV character be a Trump supporter, I felt that her Fox News-like political comments on Twitter were, as a character in Preston Sturges' THE PALM BEACH STORY said, "...just an overture to the opera that's coming."

I met Roseanne briefly at an awards show in the late 80s.  In 1993 or 94, I got a soundbite from her when I was covering an event at Disney World for WNBC TV news.  Way back then, the behind the scenes Hollywood buzz on Roseanne Barr was never, ever "She's one of the nicest people to work and deal with...a professional.  Just like a Mary Tyler Moore."  Barr's behavior was reportedly erratic. Working with her as a producer or writer could be a stress test. But, she got paid. Big money. 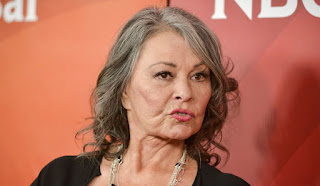 I read the Twitter comment that got her fired and I read it about two hours before news hit that she had just been fired via the immediate cancellation of her rebooted sitcom.  When I read the offensive tweet, I thought "Damn! She posted that? This is racially offensive."  Comparing black people or a black person to a monkey is centuries-old racist talk. Period.  And, for decades in my career as a TV performer, I was always aware of the morals clause in a standard talent contract.  That basically says to mind your manners and not do anything extremely rude or lewd that would embarrass the company.  If you did, you'd be fired.  Do modern-day contracts have a morals clause anymore?  When Trump was host of THE APPRENTICE on NBC and kept insulting President Obama with his birther-ism comments, I felt for sure he'd be fired.  That stuff was racially offensive to us African Americans.  If I'd been hosting an entertainment show on NBC and, on a red carpet, made a statement like "President Bush did nothing to help black people during Hurricane Katrina and he doesn't have the skills to be our President," I would have been replaced with Howie Mandel the following week.

No one said this yesterday, but ROSEANNE getting suddenly axed -- and axed by the woman who is the first African American president of ABC Entertainment -- was a definite big moment in the "Time's Up" movement.

Two other things that I thought about yesterday after this whole ROSEANNE show meltdown -- Do people with national broadcast jobs realize that this is public?  Twitter is public.  I thought that as I read absolutely vile remarks from popular TV host Adam Richman (MAN VS FOOD) on Instagram.  Boasting about his weight loss after basically binge-eating for bucks on Travel Channel, he posted a hashtag that bothered women with a special health issue. A woman mentioned that in a response to him.  Things escalated. He got egotistically angry and wrote to one woman that she should consider suicide....and he called her the C-word.  On Instagram.  A man with a new national show on Travel Channel called MAN FINDS FOOD.  The Travel Channel dropped Richman's show because of that Instagram mess reported in  papers such as The Washington Post. Jezebel has the full thing.  Google "Adam Richman Jezebel."  Anyway, my point is -- it's Instagram and it's public, Adam Richman.  It's radio and it's public, Don Imus.  It's a popular comedy club stage in Los Angeles and it's public, Michael Richards (who ranted the N-word) and it's public, Mel Gibson.  When you made ignorant comments about gay men, Mel, you made them to a newspaper reporter.

I would have thought twice...thrice even...before posting anything like what Roseanne did on Twitter and what Adam Richman wrote on Instagram.  But, there's another thing that I've learned about show biz through the years.  It's that some white folks can act afool, do or say offensive things in public -- and make big money again six months later! I've since seen Adam Richman a few times doing food segments on TODAY on NBC.  He now has a show on the Cooking Channel.  If I called a woman the C-word on social media while I was hosting a national TV show, I'd be lucky to have work today as a janitor.  Don Imus continued his top income radio career months after calling black female athletes "nappy-headed hoes," Mel Gibson is making movies again and even went on to snag another Best Director Oscar nomination.  About six months or a little more after he was videotaped shouting racial slurs onstage in L.A., former SEINFELD star Michael Richards booked work.  It may not have been a hit series, but Kirstie Alley got a TV Land sitcom called KIRSTIE in 2013.  Michael Richards was cast as a regular on her sitcom.

All those people have made more money in a month than I've made in a decade.  And look what they did.  That's show biz.  Let's see if Roseanne Barr has a new gig by Thanksgiving time later this year. If not sooner.