It's like the Oscars for straight guys. Today is Super Bowl Sunday. By the way, whenever my hetero buddies complain about the length of the Oscars telecast, I always remind them about the Super Bowl game and the pre-game shows. One year on a Super Bowl Sunday, I flew from New York to Minneapolis to visit my sister. The game was on when I arrived at the airport for my departing flight. When I arrived in Minneapolis and got into my sister's apartment, the game was still on. So, don't complain about the Oscars. For the gay community, that awards show is OUR Super Bowl.

For movie entertainment before the big game, there are some movies that are ripe for watching today. There's 1932's HORSE FEATHERS starring the Marx Brothers in a football game... 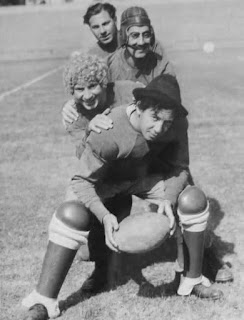 ...there's the 1940 biopic, KNUTE ROCKNE, ALL AMERICAN with Pat O'Brien as the famed football coach, there's 1974's THE LONGEST YARD with Burt Reynolds in a prison football game and there's 1979's NORTH DALLAS FORTY starring Nick Nolte in one of his best comedy/drama roles as the veteran,  non-conformist NFL star. Add to them the 1982 musical comedy THE BEST LITTLE WHOREHOUSE IN TEXAS starring Burt Reynolds and Dolly Parton. Parton stars as Miss Mona, the sweet and shapely lady who runs a...business...that's very popular with local football players in need of hormonal recreation. 1986's WILDCATS stars Goldie Hawn as a high school football coach in the Chicago area. Woody Harrelson's film debut. Screen newcomer Wesley Snipes is in it too. Hawn was a producer of this comedy, Notice, in the speaking roles, that there is way more racial diversity among the actors than we saw in the John Hughes teen comedies also set in the Chicago area during the 1980s. The Hughes teen comedies were predominantly Caucasian. Then there's the inspirational sports drama REMEMBER THE TITANS, a 2000 release with Denzel Washington as a high school football coach. 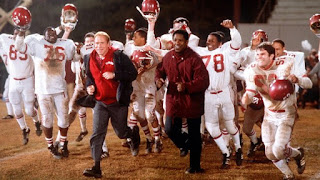 But, for me, required viewing every Super Bowl Sunday is a Debbie Reynolds musical number in 1953's I LOVE MELVIN. It's been noted that Debbie was one of the few women in film who danced with Gene Kelly, Fred Astaire and Bob Fosse. Debbie Reynolds was the only woman in film to use an Oscar as a nutcracker in movie -- 1954's SUSAN SLEPT HERE. Well, she was also the only woman to dance in a musical number as a football. Here she is in the "Saturday Afternoon Before the Game" number from I LOVE MELVIN.
Enjoy your Sunday Bowl Sunday. Save me some Buffalo wings.