THE IMPOSTORS by Stanley Tucci

Are you a fan of classic Hollywood films from the 1930s and 40s?  Do you like those madcap movies by Preston Sturges?  Screwball comedies by directors such as Howard Hawks (BRINGING UP BABY, HIS GIRL FRIDAY, GENTLEMEN PREFER BLONDES) and William Wellman (NOTHING SACRED, ROXIE HART)?  Then you may dig this shipboard comedy written and directed by Stanley Tucci.  The public didn't flock to see it in 1998.  On network TV, I enthusiastically recommended its DVD release.  When I saw this comedy, I laughed a lot.  I was really in need of laughs and this delivered.  It's a handsome package, a screwball comedy that takes place mostly on a luxury liner in the 1930s.  It has the spirit of those old Hollywood favorites.  But this was a screwball comedy with sophistication that came out when frat boy comedies starring Adam Sandler like HAPPY GILMORE and BIG DADDY were popular at the box office.  I watched THE IMPOSTORS on Netflix this week and laughed even more.  Once again, I needed those laughs.  It won my heart from the very beginning with an opening sequence done like a silent film.  Stanley Tucci and Oliver Platt showed that they had the gift for physical comedy in THE IMPOSTORS. 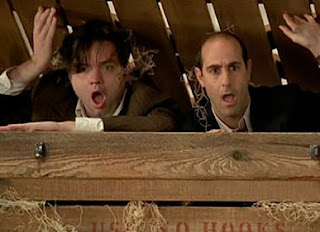 Stanley Tucci and Oliver Platt play down-on-their luck New York City actors.  Tucci and Platt work so well together you'd think they were an established screen comedy team like Bing Crosby & Bob Hope or Laurel & Hardy.  The two unemployed actors are on the run from a mean, liquor-soaked ham of a Shakespearean Broadway star and the cops.  They hide out in a big basket totally clueless that the basket will be cargo on a luxury liner soon to set sail. 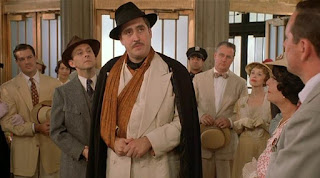 On board there's mistaken identity, a man with a bomb, international ladies of intrigue, lonely people, lovers, a champion athlete....and the big, physically abusive Broadway star they insulted in public.  The stowaway actors must think quickly and pretend to be ship stewards in order to keep from being arrested and to keep the man with the bomb from blowing up the ship. 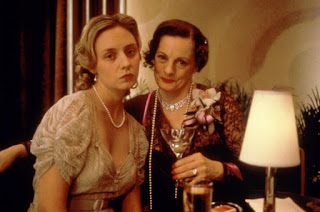 One of the coolest things about this sweetly silly comedy is that it's packed with the familiar faces of actors you know from TV and indie dramas.  There's Dana Ivey.  There's Richard Jenkins who played the dead father on HBO's SIX FEET UNDER and went on to get a Best Actor Oscar nomination for his terrific work in the very relevant 2007 indie film, THE VISITOR, about a university professor who befriends an illegal immigrant.  There Allison Janney, Isabella Rossellini, Campbell Scott, Steve Buscemi, Alfred Molina and Michael Emerson.  A few years later, Emerson would hit big on the ABC TV series, LOST.
It is obvious that the whole cast had fun making this movie.  The scene in which Oliver Platt looks like a big blonde Rosie O'Donnell made me do a loud snort laugh.

If you appreciate the style of screwball comedies, try THE IMPOSTORS written and directed by Stanley Tucci.  It's fun, light weekend entertainment.  We've seen Stanley Tucci's dramatic and comedy talents in THE DEVIL WEARS PRADA and JULIE & JULIA (both with Meryl Streep),  THE LOVELY BONES (2009 Best Supporting Actor Oscar nomination), EASY A and THE HUNGER GAMES. This was the second film Stanley Tucci directed after his critically acclaimed BIG NIGHT (1996).

Remember back in the 1980s, before we knew his name, when he was the sexy undershirt guy in the Levi 501s commercial?