From MEAN GIRLS to CASABLANCA

Listening to NPR's Scott Simon host WEEKEND EDITION is a Saturday morning ritual for me.  Full disclosure:  He's interviewed me on the show a couple of times about diversity and inclusion in Hollywood relative to the Oscar nominations.  Today, he had a segment that I loved.  The theme of a new series is "Movies You Missed."  In today's segment, he a fabulous chat with Sam Sanders, a fellow NPR talent, about the beloved 1942 Hollywood classic, CASABLANCA, starring Humphrey Bogart, Ingrid Bergman, Claude Rains, Paul Henreid and Dooley Wilson.  Sam Sanders had never seen it.  After he had viewed it, Scott asked for his review.  Sam was stunned at how highly quotable CASABLANCA is.  There were lines he'd heard in pop culture for years but had no idea that they originated in the 1942 Warner Brothers film.  His idea of a highly quotable movie was MEAN GIRLS, a 2004 teen comedy starring Lindsay Lohan with a screenplay by Tina Fey. More about MEAN GIRLS later.  I loved that Sam Sanders was captivated by the luminous face of that extraordinary actress, Ingrid Bergman.  "Here's looking at you, kid." 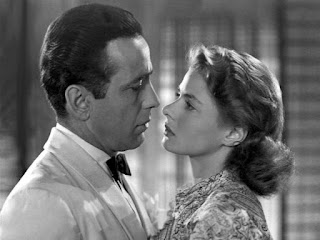 I will give you a link so you can hear this segment yourself.  If you're a classic film lover, you'll totally dig it.  One thing Sam admitted reminded me of something a couple of reputable casting directors in New York City told me.  Both casting directors taught classes in film technique and how how to improve one's film & TV auditions.  Both casting directors recognized me from my TV career and commented that they were frustrated by young acting hopefuls who had no interest in watching movies over 20 years old and shot in black and white.  This was like saying "I want to be a Broadway actor but I don't want to do any plays that are over 20 years old.  I don't need to study that Shakespeare, Ibsen, Chekhov, Tennessee Williams or Lorraine Hansberry stuff."  Or it's like seeking work as a journalist -- like someone who'd work on PBS or NPR -- and saying "I don't want bother with any archive news facts that are over 20 years old and any old black and white news footage -- like Dr. Martin Luther King's March on Washington."  Film is art.  Art in black and white or Technicolor.  The casting directors noted that if young acting hopefuls were lucky enough to get an audition meeting with Scorcese, Spike Lee, Quentin Tarantino or The Coen Brothers and if those young actors knew nothing about classic black and white films, they would not get a callback because those old black and white classics are part of those directors' language.

Watching them should be homework for the serious aspiring film and TV actor. 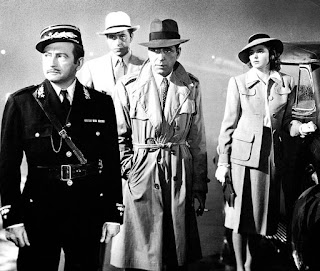 One major element about this lively WEEKEND EDITION conversation that I loved was that Scott Simon had this CASABLANCA discussion with a black person.  I've written before, several times, about the long and obvious fact that the field of film critics and movie channel hosts on national TV has been sorely lacking in race and gender diversity for decades.  It's been a predominantly white men's club.  African American critics and hosts have been passed over and largely left out of the classic film arts talk unless it's Black History Month.  This goes for network morning news programs, syndicated entertainment news shows and classic film channels.  I love Turner Classic Movies.  I have since 1999.  However, seeing a black guest host or guest co-host on TCM is still about as rare as the number of black women who've won the Oscar for Best Actress.  That is so disappointing.

Scott and Sam talked about Dooley Wilson who played the pianist/singer and best friend to Bogart's character.  Sam was worried that a black character in an early 1940s film would not reflect a "woke" sensibility.  That it would play to stereotypes.

Well...to me, Sam the entertainer in CASABLANCA is more "woke" that a section of MEAN GIRLS.  I wrote about that very thing in last month's post.  Just go to my July section and read my post, Talkin' Race with Tina Fey.

If I had to program films to be aired during a Black History Month, I'd put CASABLANCA in the mix.  Back in those Hollywood days, African American actors were supporting players -- and mostly in servant roles as mammies, maids, butlers, cooks, railroad porters and such.  And they often had to speak in a cringe-worthy, stereotyped way -- "Yassuh, boss. It sho' nuff is"...that kind of dialogue.

Hattie McDaniel was the first African American nominated for an Oscar -- and she was the first to win.  She played Mammy in 1939's GONE WITH THE WIND.  The next black person to be nominated for an Oscar was recording and Broadway star Ethel Waters.  Like McDaniel, she was nominated for Best Supporting Actress.  Also like McDaniel, she played an uneducated domestic.  Waters was nominated for 1949's modern race drama, PINKY.  By the way, CASABLANCA star Dooley Wilson was Ethel Waters' leading man on Broadway in the hit musical comedy, CABIN IN THE SKY.  In between those two black actresses getting Ocar nominations, the first black man to receive an Academy Award was James Baskett.  Baskett was given an honorary Oscar for his work as the singing and storytelling plantation worker, Uncle Remus, in the 1946 Disney musical, SONG OF THE SOUTH.  Who played the plantation cook in a musical number with Uncle Remus?  Oscar winner Hattie McDaniel.  McDaniel was billed like a bit player after GONE WITH THE WIND in some top Hollywood films in which she was the only cast member who'd won an Oscar.   The gifted McDaniel played supporting role maids for the rest of her film career. 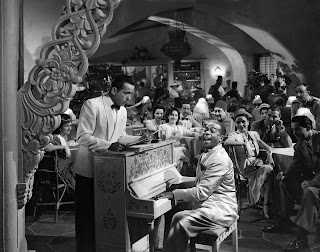 In CASABLANCA, Sam is not only the best friend and confidante to the white male lead character, he's a headliner in a swanky, sophisticated nightclub like the late, great Bobby Short was in Manhattan. He's sharp.  Sam has champagne with the two white lead characters and he dresses like he's in ESQUIRE Magazine.  In those days in Hollywood films, you did NOT see a well-dressed black character having champagne with the main white characters in other top studio releases.  This flashback sequence in CASABLANCA was groundbreaking. 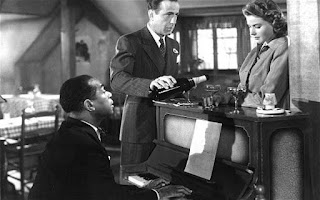 Also, Dooley is in key scenes of CASABLANCA and has important dialogue with the two stars. 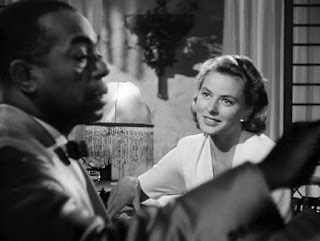 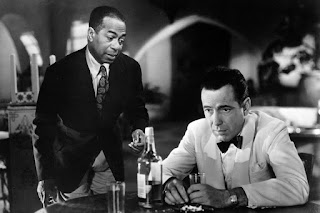 Glamorous and gorgeous Lena Horne would be a trailblazer in changing racial images when she was an A-List MGM musical star after her debut in Vincente Minnelli's 1943 MGM adaption of the Broadway hit, CABIN IN THE SKY.  (Waters would reprise her Broadway role.  Dooley Wilson was replaced by the very popular Eddie "Rochester" Anderson).  However, for the rest of her MGM years through to the 1950s, Lena Horne was showcased in deluxe musical numbers that were separate from the main action of the film.  So, she never got to interact in the story and do lines with the white fellow stars such as Judy Garland, Gene Kelly, Frank Sinatra, Van Johnson or Esther Williams.  She was a star who could only do dialogue scenes opposite other black actors in MGM movies. 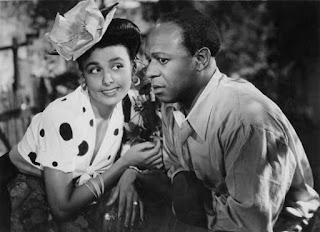 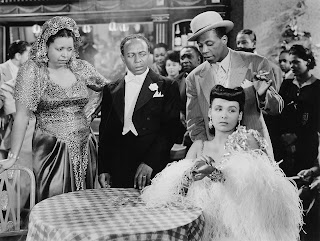 Sam in 1942's CASABLANCA was more of a trailblazing role for an African American actor than most people realize.  And another thing, Rick Blaine (Bogart) negotiates a new nightclub deal for Sam when a new owner takes over -- and he negotiates up!  He gets Sam more money than the new owner originally proposed.  Rick Blaine in CASABLANCA did better financially for Sam than my last two broadcast agents in New York City did for me!  Rick was "woke."

Now go read my July 2017 piece about Tina Fey writing for people of color. She had to alter one quote in MEAN GIRLS after the film was released.

Scott Simon, thanks for taking me to CASABLANCA again. "We'll always have Paris."