Three performers who are pros at making you laugh each made a movie that you probably missed.  A couple of these movies are now available on Netflix.  Each film has characters you feel like you know.  Real working class people.  First up...I loved Molly Shannon on SATURDAY NIGHT LIVE.  She made me laugh so much.  Then, I was surprised to see an effective dramatic side of her in the comedy-drama YEAR OF THE DOG.  In that 2007 indie movie, she played a lonely 40 year old single woman who has better luck with dogs than she does with men.  In 2016, critics were all gaga for LA LA LAND and Emma Stone was poised to get a Best Actress Oscar nomination -- and win. Best Actress Oscar nomination-worthy performances came from women that year who didn't get nominated.  Women like Taraji P. Henson in HIDDEN FIGURES, Annette Bening in 20th CENTURY WOMAN...and Molly Shannon in OTHER PEOPLE. 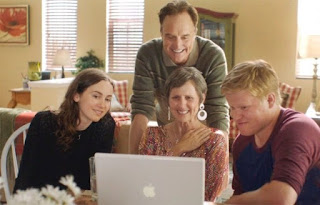 This movie is further proof that Shannon has serious dramatic chops.  She plays a mother in the Sacramento suburbs who dearly and deeply loves her grown son.  He's a TV comedy writer in New York City whose career has hit a few potholes and his relationship with his boyfriend hit a dead end.  He moves back to Sacramento to help his mother because she's gravely ill with cancer.  There he is, feeling like a stranger among mostly conservative relatives in a very beige neighborhood.  The things we do for love. 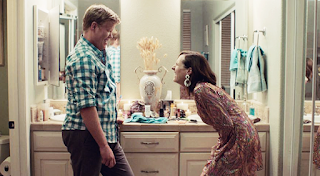 Click onto this link and take a look at the trailer: https://youtu.be/zESqf9Pwmnc.

There's laughter and tears in OTHER PEOPLE plus a terrific, touching performance from Molly Shannon.  She's a revelation.

THE FOUNDER.  Man, I really liked this movie a lot.  You wouldn't think that the story about McDonald's would make for an interesting movie, but it does.  Yes, the burger chain.  Michael Keaton is at the top of his game as THE FOUNDER.  He plays Ray Kroc, the struggling salesman who rose to become one of the country's most successful businessman as head of the McDonald's corporation.  Keaton was a Best Actor Oscar nominee for BIRDMAN.  The film won the Oscar for Best Picture of 2014.  Keaton followed that with another fine dramatic performance.  He played a Boston newspaperman in the true story, SPOTLIGHT, and that film won the Oscar for Best Picture of 2015.  He's very good in THE FOUNDER, another film that came out in 2016.   I found it on Netflix.  It hooked me right away because it's a brisk biopic that becomes somewhat of a cautionary tale. 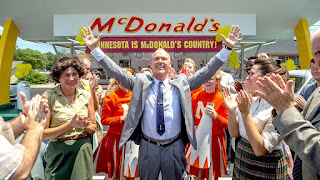 Back in the 70s and 80s when Kroc was being hailed as a wealthy businessman with an All-American product, the story on how a guy with the last name "Kroc" came up with a burger franchise called "McDonald's" was always kind of vague.  Well, the business started with a burger stand in Southern California owned by two men -- the McDonald Brothers.  Ray is in his early 50s and not having much success selling milk shake machines.  Teens hang out at drive-in food joints.  Carhops bring out your order and hook the tray onto the front door of your car.  Ray hits those food joints to make his sales.  Then the McDonald's stand comes to his attention.  Ray may not be a success, but he's persistent and is quick to seize upon any idea and opportunity that can make his dreams bigger.  When he sees how well the McDonald brothers are doing, he drops the milkshake machine idea and tells the two polite, conservative men to "franchise."  They don't share his vision.  He aggressively pushes them to share his vision.  They continue to say "No."  But Ray, whose ambition and ideas we like, starts to show the dark side of persistence.  He will make his big dream come true.  He will be a success.  Even if it means having to play rough.  He gave them chances to come along for the ride.  Here's a trailer.
Who ever thought fast food burgers could be such a ruthless business?  John Carroll Lynch and Nick Offerman are quite good as the conservative, nice McDonald brothers.  This is a tale that tells you persistence is often more important than talent to succeed in America.  And, in business, you should always get it in writing. 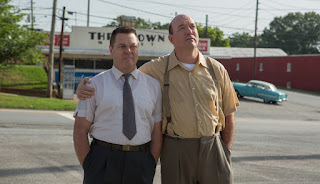 The story starts in 1954, when moviegoers are paying to see ON THE WATERFRONT, and ends in 1970 when former actor Ronald Reagan is now Governor of California.  A couple of screenplay elements needed to be fleshed out more.  Like the marriage of the Kroc partner whose wife gives Kroc a great idea for McDonald's milkshakes. But, overall, this film is lively and surprising and well-acted.  It holds your interest.

THE FOUNDER is worth a look on Netflix.  Especially if you're a Michael Keaton fan.

Shirley MacLaine and Jessica Lange are a hoot in  WILD OATS.  This comedy is only about 90 minutes long and it was supposed to get a theatrical release, according to MacLaine.  But something financially shady happened with the film company, reportedly.  I think it even took a long time for the two stars to get paid.  If they did.  WILD OATS aired on Lifetime instead of playing at a cineplex near you in 2016.  It's now on Netflix.  It should've been released theatrically.  I've gone to theaters and had to sit through Adam Sandler or Jennifer Aniston comedies that were so bad they made me want to kick puppies on my way home from the theater.  WILD OATS may not be a great classic comedy, but it sure is one fun pastime.  And both ladies look good in it. 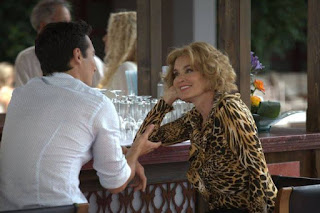 Shirley MacLaine always hits a homer as a widow.  She was a widow in her screen debut, Hitchcock's THE TROUBLE WITH HARRY.  She was a widow several times with fabulous Edith Head outfits in WHAT A WAY TO GO!  She won a Best Actress Oscar for playing a widow in TERMS OF ENDEARMENT.  She was excellent as cranky widows in STEEL MAGNOLIAS and BERNIE.  In WILD OATS, she's the beloved, small town retired schoolteacher who's husband is being laid to rest.  She's at the funeral with her best friend played by Jessica Lange.  The best friend, still a babe, is having it rough.  Her husband left her for a younger woman.  The schoolteacher waits for $50,000 from her late husband's insurance.  The insurance company makes an error.  It sends her a check for $5 million instead.  The two girlfriends quickly deposit the check and take a vacation overseas.  Trouble and laughs ensue.
These two senior talents float this comedy.  Shirley MacLaine can get more out of just giving someone a side-eye in a scene that some younger actresses can achieve with half a page of dialogue.  Notice how MacLaine and Lange do less and get more in some comedy scenes while Demi Moore, as the schoolteacher's daughter, overacts and isn't as effective as the two veterans.

I love that both ladies got some romantic action while on their international holiday. Shirley MacLaine and Jessica Lange make a very cool screen team.  On a weekend, get some festive beverages and food and enjoy WILD OATS.