He's currently an Emmy nominee.  Hallelujah!  He deserves that nomination for his excellent performance as an unappreciated film director in Hollywood.  In the TV mini-series, FEUD:  BETTE AND JOAN, versatile Alfred Molina played Robert Aldrich.  He was man who directed WHAT EVER HAPPENED TO BABY JANE?  In this TV mini-series, we see that Aldrich really had his hands full on that movie project.  He was working with two Oscar-winning veteran movie queens who were no longer young and no longer getting good scripts.  If a juicy script did come along, they were on it like a junkyard dog that found some uneaten T-bone steak.  Joan Crawford and Bette Davis were two heavy pieces of furniture to deal with, but they realized that they needed this low-budget psychological horror tale of two rival sisters to resuscitate their careers.  Aldrich, serious about his craft, was treated badly.  Jack L. Warner, head of Warner Brothers, gave Aldrich the WHAT EVER HAPPENED TO BABY JANE? duties but bluntly told him that he was not a director of note like John Huston, William Wyler or George Cukor.  He was more bargain basement than main floor.  A lot of us could relate to the humiliation and determination in Molina's portrayal of Aldrich.  The low-budget movie became a huge box office smash and brought Bette Davis an Oscar nomination.  Aldrich would go on to make other big hits such as HUSH...HUSH, SWEET CHARLOTTE also with Bette Davis, THE DIRTY DOZEN and 1974's THE LONGEST YARD starring Burt Reynolds. 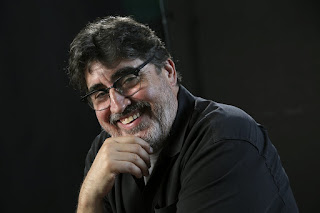 I am so glad Molina got that Emmy nomination as the director who, like the two aging stars, was desperate for a success.  He was marvelous and so truthful in FEUD. He did a great job. 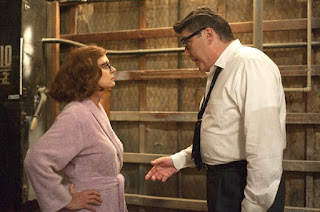 I've been an Alfred Molina for years and you probably have been too.  But when the heck will Hollywood wake up and give him an Oscar nomination?  He's never been nominated.  Let me give you a few of his film performances that I feel were Oscar nomination worthy:

Molina is flat-out fabulous as Kenneth Halliwell, the reserved and not-as-handsome half of a gay male couple.  Halliwell is treated as beige while his celebrated, handsome partner is the colorful and charismatic celebrity, Joe Orton.  PRICK UP YOUR EARS is a true tale.  This was a gay relationship in the 1960s when being gay was pretty much illegal.  Both lusty Joe Orton, very well played by Gary Oldman, and jealous Kenneth Halliwell dream of becoming writers.  Orton, we see, gets popular in public restrooms and as a playwright.  Orton's play, ENTERTAINING MR. SLOANE, was a sensation.  It was made into a 1970 British film.  Halliwell was not such a sensation.  He almost becomes like a servant to his successful boyfriend.  Orton's prolific career was brief -- due to the fact that he was bludgeoned to death.  Click here to see a trailer:  https://youtu.be/GpYSqJZosEU. 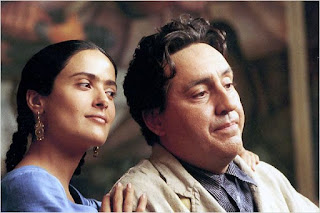 Salma Hayek got an Oscar nomination for Best Actress in this film directed by Julie Taymor.  It's a screen biopic on the life of artist Frida Kahlo.  A severe physical injury and a rocky marriage were the pressures that formed her original art and made it stand out like a diamond.  Alfred Molina stands out as Frida's husband, Diego Rivera, also a larger-than-life artist.
AN EDUCATION (2009). 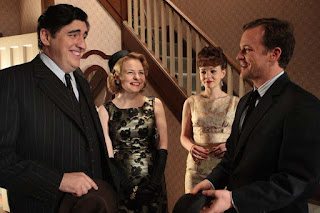 Another film directed by a woman, Lone Scherfig, and another film in which a woman director guided her lead performer to a Oscar nomination for Best Actress.  Carey Mulligan is radiant in this coming-of-age story about a teen girl in suburban London.  Her home life is sweetly bland but she has bright plans for her life, plans that include Oxford University.  A charming but older man drives into her life.  We'll see how she handles this new arrival.
Alfred Molina was absolutely delightful as her loving dad who is serious about her education.  That performance just popped onscreen, as did Carey Mulligan's. 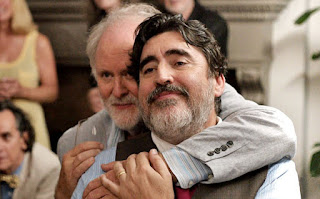 Alfred Molina and John Lithgow starred in one of my picks for the Top 10 Films of 2014.  First of all, the fact that this film received an R-rating is absurd and shows how outdated and conservative the ratings board is.  A gay senior citizen says a 4-letter word in a bar.  LOVE IS STRANGE, a touching drama, deserved nothing more severe than a PG-13 rating.  Molina is wonderful as George, the music teacher.  George and Ben, a New York City couple, have been together for decades.  Laws  have changed and now they can be married.  It's a most happy family occasion.

However, the Great Recession hits and affects them.  There's job loss and they lose their home.  They are forced to separate for individual lodging with friends or relatives.  Social attitudes, family attitudes, the economy and age affect their long commitment to each other and test their love.  Their love always passes the test.
This is definitely another performance that should have brought Alfred Molina an Oscar nomination.  He's remarkable.  If you know classic films, LOVE IS STRANGE has poignant echoes of the 1937 tearjerker, MAKE WAY FOR TOMORROW directed by Leo McCarey.  You fully believe that Alfred Molina and John Lithgow are a very dear, old married couple in a changing New York City. 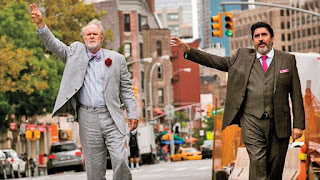 There you have it.  Watch just those four film performances and, I bet, you'll agree with me that Alfred Molina is long overdue an Oscar nomination.