Some years ago, a good buddy of mine from my Milwaukee years was coming to New York City for a short holiday.  He contacted me ahead of time and invited me to be his guest at the Saturday matinee of a Broadway show.  After the show, we wanted a quick cocktail and dropped into a nearby deluxe hotel.  I suggested the hotel because I'd been to its bar/restaurant.  We were laughing, chatting, sipping cocktails and having a bite to eat when I noticed a long and lovely pair of lady legs stretched out from under a nearby table.  The legs seemed to stretch from our theater district location in New York City all the way to Chicago.  I followed the legs up to the face of the owner.  Sitting alone, with a Playbill to a Broadway show, and having a beverage was....Julie Newmar.  Yes, Catwoman herself.  That feline and fabulous dancer/actress seen in a couple of MGM's crown jewel musicals. 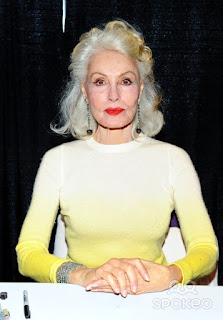 Greg, my buddy, knew something was up because my eyes got the size of teacup saucers.  Our waitress had come to the our table with our food order.

"You see that lady seated alone at that table?"

"Yes," the waitress replied.  "She's very nice.  She just ordered some appetizers too."

"Great.  We know her.  Please put her order, drink included, on my tab.  Seriously."  I was treating Greg.  I was going to treat Julie Newmar too.  The waitress smiled broadly and took care of it.  I think she loved delivering the message.

He gave a nonchalant glance over my shoulder and then did an Ethel Mertz-like gasp.  "Oh my god! It is her!" he said a hushed voice.  Catwoman from the 1960s BATMAN series on ABC starring Adam West. 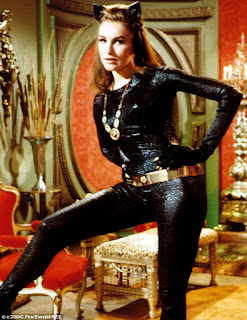 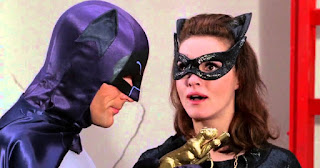 After she finished eating....SHE CAME OVER TO OUR TABLE TO THANK US AGAIN!

We, of course, were giddy and invited her to sit down with us.  She did.  We could tell that she was honestly touched.  "How did you know it was me?"

Practically in unison, Greg and I gushed, "We loved you as Catwoman on BATMAN!"

She let out a sweet, throaty laugh.  I said, "And you did some great dancing at MGM.  I loved you in SEVEN BRIDES FOR SEVEN BROTHERS and THE BAND WAGON in 'The Girl Hunt' number.  Did Sydney Guilaroff do your hair in those two movies?" 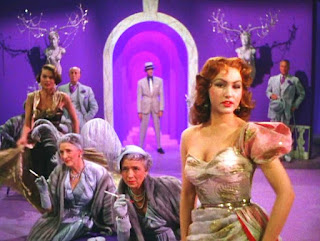 She went slack-jawed and answered, "Yes!  How did you know that Guilaroff did my hair?"

Julie Newmar laughed again.  She was a most charming guest at our table for a few wonderful minutes.  We chatted about her movies and her TV sitcom work. 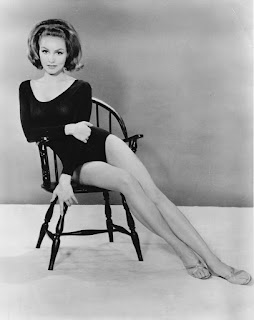 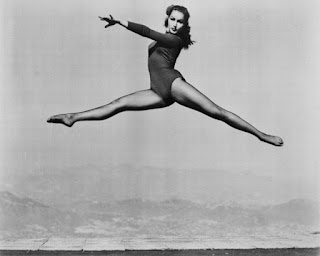 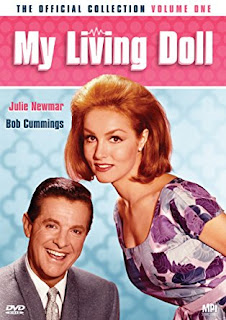 I can't recall what Broadway show Greg and I had seen.  But I remember having laughs with him and we both remember the wonderful, unexpected company of Julie Newmar at our table late that Saturday afternoon.

And what a senior babe!  She looked sensational.