You may want to set whatever TV recording devices you have for Thursday, August 10th.  TCM, cable's Turner Classic Movies, has its annual Summer Under The Stars month underway.  Each day and night in August salutes one star.  Sensational Sidney Poitier gets the spotlight on August 10th.  He is the first Black American male to receive an Oscar nomination (Best Actor for 1958's THE DEFIANT ONES) and the first Black male to win the Oscar (Best Actor for 1963's LILIES OF THE FIELD). 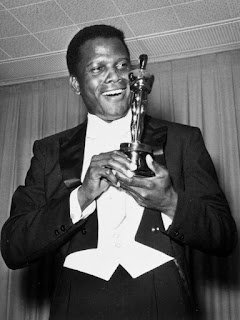 Sidney Poitier was also the first Black actor be a definite top Box Office draw.  This was in the 1960s.  Keep in mind that he starred in two of the big hits of 1967 and those hits were in the running of the five films nominated for the Best Picture Oscar.  They were GUESS WHO'S COMING TO DINNER and IN THE HEAT OF THE NIGHT.  The winner was IN THE HEAT OF THE NIGHT. 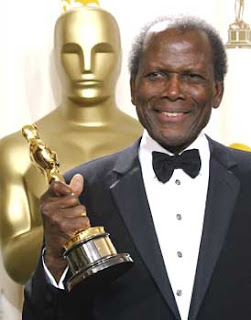 I grew up on Sidney Poitier movies.  To me, a big surprise is that he was never nominated for another Oscar after his LILIES OF THE FIELD victory.  He went on to do even better work with more complex roles.  Rod Steiger won Best Actor for IN THE HEAT OF THE NIGHT.  I feel Poitier was worthy of a Best Actor Oscar nomination for that one also. 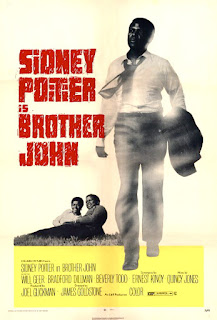 There is a little-seen 1971 dramatic film that many feel displays one of the best performances of Sidney Poitier's movie career.  I'm one of those people.  The movie is called BROTHER JOHN and it airs at 6:00am Eastern time Thursday.  So set your machines to record early Thursday morning.  Poitier is Brother John.  He's a mysterious Black man who arrives in a Southern town for his sister's funeral.  Is John Kane, a man troubled by the social unrest he sees, an outside agitator in a town having labor disputes or is he a celestial visitor?  It's an interesting film in the Sidney Poitier canon.

At 4:00pm Eastern time, there's BUCK AND THE PREACHER.  This is a western starring Sidney Poitier and Harry Belafonte.  Poitier also directed the film.  On Broadway, Sidney Poitier co-starred with Ruby Dee in the groundbreaking play, A RAISIN IN THE SUN.  They repeated their husband and wife roles in the 1961 film adaptation.  They played family members in the 1950 race drama, NO WAY OUT, written and directed by Joseph L. Mankiewicz.  They're husband and wife in Martin Ritt's 1957 drama, EDGE OF THE CITY. 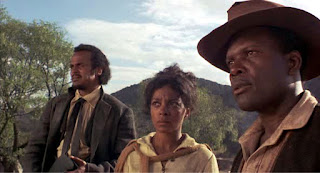 Sidney Poitier and Ruby Dee are a married couple in his post-Civil War western, BUCK AND THE PREACHER.  Ruby Dee got one Oscar nomination in her long career.  She was a Best Supporting Actress Oscar nominee for 2007's AMERICAN GANGSTER.  That amazing performance should not have been Ruby Dee's first and only Oscar nomination.  Buck's wife realizes that, yes, the Civil War is over and Black people have been freed.  But they're not really free. Racism still has roots in America.  She wants to leave. 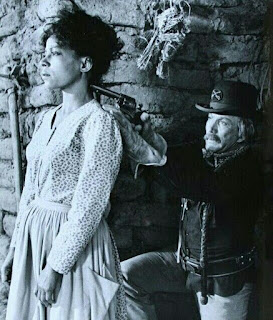 Sidney Poitier directed Ruby Dee to a performance that, in my heart, was worthy of consideration for a Best Supporting Actress Oscar nomination.  Watch her in BUCK AND THE PREACHER. Ms. Dee is a stand-out.  She should've also had a Best Supporting Actress Oscar nomination for her sublime and sexy comedy work in 1963's GONE ARE THE DAYS, an adaptation of a civil rights era satirical play written by and co-starring her husband, Ossie Davis.  The play was called PURLIE VICTORIOUS, named for the traveling preacher Ossie Davis played.  It was made into a hit Broadway musical entitled PURLIE.

I've written before about Hollywood's lack of opportunities for actresses of color.  In interviews, Black actresses have revealed that they turned to TV after getting an Oscar nomination because, after they won or didn't win the Oscar, Hollywood had no more scripts for them.  I worked with Whoopi Goldberg, sitting next to her and doing national morning radio for two years.  She told me the same thing.  Cicely Tyson, Diahann Carroll, Angela Bassett, Alfre Woodard, Marianne Jean-Baptiste (1996's SECRETS & LIES), Rita Moreno, Taraji P. Henson, Whoopi Goldberg and Viola Davis are some of the Oscar-nominated minority actresses who turned to TV for employment because Hollywood hadn't gotten the movie-industry memo on diversity, inclusion and equal opportunities.  For 20 years, Whoopi Goldberg held the record as the Black actress with the most nominations in Oscar history.  She has two nominations.  She was a Best Actress Oscar nominee for 1985's THE COLOR PURPLE.  She won the Best Supporting Actress Oscar for 1990's GHOST.

Whoopi's 1991 record was broken last year, in 2016, when Viola Davis got her third Oscar nomination.  She won Best Supporting Actress for FENCES and Viola is now the most Oscar-nominated Black actress in Hollywood history.  With just 3 Oscar nominations.  Octavia Spencer (THE HELP and HIDDEN FIGURES) now matches Whoopi Goldberg with two Oscar nominations.  The talented Jennifer Lawrence, still only in her 20s, has four Oscar nominations to her credit.  She also had more script opportunities than those veteran actresses of color did.

Ruby Dee did a lot of great work on TV.  And in films.

Sidney Poitier's film career up to and including the 50th anniversary of the release of IN THE HEAT OF THE NIGHT reflects the progress and frustrating lack of progress in America's race relations and equal opportunities.  LILIES OF THE FIELD was a feel-good film released a couple of months after Dr. Martin Luther King's historic March on Washington (which activist friends Poitier, Harry Belafonte, Ossie Davis and Ruby Dee attended).  LILIES OF THE FIELD was an indie film that was modestly shot and had a low 6-figure budget.  It made over $2 million at the box office.  I think Sidney's Oscar was for that film plus fine work in BLACKBOARD JUNGLE, NO WAY OUT, THE DEFIANT ONES, A RAISIN IN THE SUN, PARIS BLUES and PRESSURE POINT. 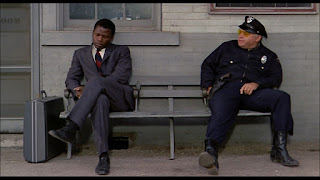 Remember when AMC was American Movie Classics and aired only classic films before it switched over and started presenting acclaimed original programming such as MAD MEN and BREAKING BAD?  AMC never had a Black person as one of its regular hosts.  In the 1990s, when it had auditions for a new host for its final phase of classic film airing, my agent was extremely frustrated because the company wouldn't book me an audition.  But it booked another one of her clients.  A very handsome, blue-eyed guy about whom, she said, "He's nice but he didn't have his own talk show and have Kirk Douglas as his first guest like you did."

In 2002, when Sidney Poitier accepted his Honorary Oscar, we still saw no Black film critic doing regular reviews on a network morning news program (when each show had one) and there was no Black reviewer as half of the film critic teams on syndicated TV shows.  Film critics and classic movie hosts. Those two fields on TV have lacked in overall racial diversity.  We saw mostly Caucasian males talking about films, directors and stars portraying Black life in America. 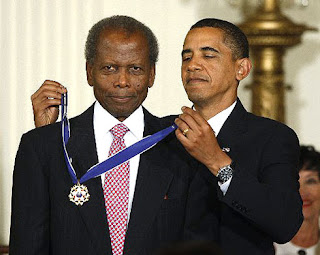 But...we did go on to see young Wesley Morris, then of The Boston Globe and now of The New York Times, become the first Black journalist to win the Pulitzer Prize for film criticism. That was in 2012.  We had two terms of President Barack Obama.  President Obama honored Sidney Poitier.  We've seen Viola Davis and Denzel Washington wins Oscars and make history.  She is the most Oscar-nominated Black actress with 3 nominations.  He is the most Oscar-nominated Black actor with 7 nominations.

As for IN THE HEAT OF THE NIGHT, in this age of "Black Lives Matter," that 50-year old murder mystery/race drama still has deep social relevance. 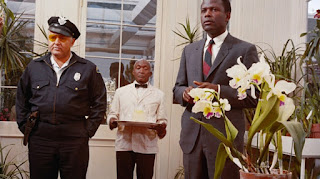 IN THE HEAT OF THE NIGHT, A PATCH OF BLUE, THE DEFIANT ONES and  TO SIR, WITH LOVE are also in the August 10th line-up saluting screen legend Sidney Poitier.  Check out TCM.com for more details.