Where's the MEN IN BLACK Actress?

Recently, I watched MEN IN BLACK on cable's AMC.  Remember when that channel was American Movie Classics and showed mostly old Hollywood movies, movies from the 1930s, 40s and 50s?  I hadn't seen MEN IN BLACK in a long time and watching it again was a fun way to pass the time on a Saturday afternoon.  Not only was it fun, it reminded me how terrific an actress Linda Fiorentino was in that big 1997 box office sci-fi action comedy hit.  She played the doctor who works in the New York City morgue and is surprised to find space aliens in a corpse.  Only in New York. 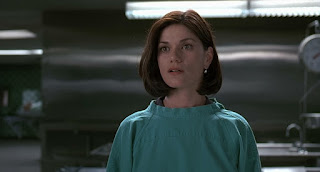 Linda Fiorentino was a treat and perfectly cast opposite Will Smith and Tommy Lee Jones. 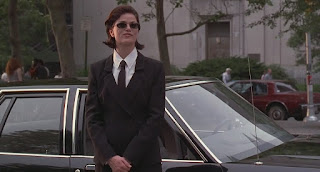 Linda Fiorentino pulled off a sweet Barbara Stanwyck double home run.  She proved to have the comedy gift in that film.  She could be tops at screen comedy just like Barbara Stanwyck was in THE LADY EVE, BALL OF FIRE and CHRISTMAS IN CONNECTICUT. 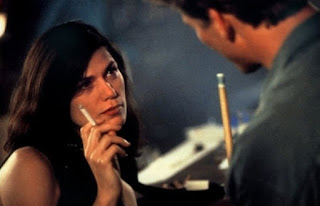 Fiorentino has previously burned up the screen as one of the most sizzling and lethal film noir dames since Barbara Stanwyck played Phyllis in Billy Wilder's classic DOUBLE INDEMNITY.  You could not take your eyes off her in 1994's THE LAST SEDUCTION.  Critics raved about her in that indie film crime thriller. 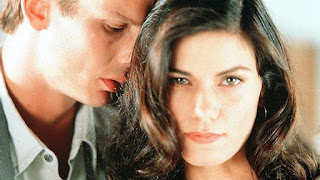 In 1999, I hosted a weekly film news show on Manhattan cable.  We focused a lot on new releases from indie filmmakers and we interviewed them.  One film we highlighted was 1999's DOGMA, a comedy that skewered Catholicism.  Linda Fiorentino was in the comedy.  She was interviewed on our show.  She was a hoot with her understated hip, sophisticated and totally cool sense of humor.

WHERE IS LINDA FIORENTINO TODAY?  WHY DIDN'T HOLLYWOOD GIVE HER MORE GOOD SCRIPTS?!?!?!  Did she stay in the business or what?  I'd love to know the the story on that versatile, interesting actress.

Now...about another movie channel.  My favorite movie channel.  As I wrote on Twitter over the weekend, I have loved cable's TCM, Turner Classic Movies, since 1999 when I added it to my cable channel subscription list.  Actor Ron Perlman, who many will remember from the popular TV series, BEAUTY AND THE BEST and as HELLBOY on the big screen, is a prime time host for October on TCM.  I also tweeted "I'd love to see black male guests hosts like David Alan Grier, Robert Townsend or Wesley Morris sometime."

No disrespect to Mr. Perlman.  Just a minority TCM fan/viewer observation.  AMC, in its old American Movie Classics days, saluted Black History Month.  But it never had a black male host.  Whoopi Goldberg, a hardcore classic film fan, was a guest host for a while.  Her Oscar-winning star status, I'm sure, inspired AMC to offer her that gig.  When AMC held auditions for a new host back in the 1990s, my late and wonderful agent tried to get me in for an audition, but couldn't. We were both frustrated because many of the stars of the classic films AMC aired had been guests on my old VH1 entertainment talk show.

Through the years up to and including this one, I've talked to black film reviewers and actors who also noticed how black folks on the whole have been excluded from the host opportunities for classic films.  It's as office TV producers feel we don't know anything about or have no interest in classic films.  We've seen black artists be Guest Programmers on TCM once in a while.  I've written before that a TCM producer contacted me personally to help book Whoopi Goldberg as a Guest Programmer.  At the time, Whoopi and I worked together on her national weekday radio show.  It aired from 2006 to2008.  Whoopi hired me as the weekly movie critic and entertainment contributor.  On TCM, I've never seen a black male as a guest host like Ron Perlman will be this month.  I can't recall seeing a black female guest host like Whoopi was for a season or more on AMC.

I mentioned David Alan Grier because he was a star on TV's classic hit sketch show, IN LIVING COLOR and an actor in A SOLDIER'S STORY , Oscar nominee for Best Picture of 1984.  Grier and I have chatted about our deep love for William Wyler's THE BEST YEARS OF OUR LIVES.  Robert Townsend also acted in A SOLDIER'S STORY, along with Denzel Washington and David Alan Grier, and Townsend himself became a film director.  He gave us the hit 1987 indie satire about diversity casting called HOLLYWOOD SHUFFLE.  Wesley Morris now writes for The New York Times.  When he wrote for The Boston Globe, the young man became the first African American newspaper columnist to win the Pulitzer Prize for film criticism.

That's just a programming observation and suggestion.   Now where is Linda Fiorentino?