She was shapely, lovely and talented.  But Theresa Harris was an African American actress in the Hollywood days of the 1930s and 40s.  That meant, like Hattie McDaniel and Louise Beavers, she get mostly maid roles.  There was an occasional exception, like when she played the women's prison buddy to Jean Harlow's heart o' gold tootsie in HOLD YOUR MAN (1932).  Harris played the maid to Bette Davis' headstrong Southern belle character in JEZEBEL.  I love the glossy treatment she got at Paramount in the 1940 musical comedy, BUCK BENNY RIDES AGAIN.  This was an extension of Jack Benny's hit radio show persona that included regulars from his show such as Eddie "Rochester" Anderson and Phil Harris.  Anderson, a pretty fine hoofer, does a deluxe song and dance number with Theresa Harris in a swanky apartment setting. 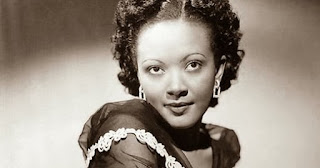 Before that, Theresa Harris had one of her best screen assignments as the best friend to Barbara Stanwyck's ambitious character in 1933's BABY FACE. 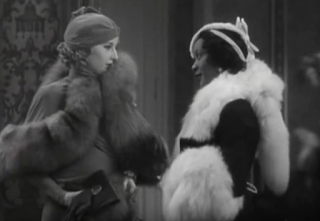 She's not credited but definitely recognizable in a serious music scene with Stanwyck in 1936's BANJO ON MY KNEE co-starring Joel McCrea.  Theresa Harris, in that riverfront scene, sings "St. Louis Blues."  Later in this 1936 comedy/drama with music, you'll see song and dance numbers performed by Barbara Stanwyck and Buddy Ebsen, both of whom would be TV stars in the 1960s.

Harris worked during the Hollywood Production Code, a code which seemed to limit black actors to servant characters.  Even in the servant role opportunities, it seemed they could be limited.  Theresa Harris worked with director William Wyler and star Bette Davis in JEZEBEL, a 1938 Warner Brothers release.  The same studio released the big romantic drama, SARATOGA TRUNK, in 1945.  Based on the Edna Ferber novel of the same name, it starred Ingrid Bergman as the Creole beauty from a down-on-its-luck aristocratic family and Gary Cooper as a dashing Texas gambler.  Instead of giving the sizeable role of the Haitian maid opposite Ingrid Bergman to Theresa Harris, the role was given to the white British actress who'd played the narrator/housekeeper in WUTHERING HEIGHTS (1939), Queen Elizabeth THE SEA HAWK (1940) and went on to play one of the Catholic nuns in BLACK NARCISSUS (1947).

Warner Bros. slapped some dark make-up on Flora Robson, put a bandana on her head and let her play the Haitian maid.  Flora Robson got a Best Supporting Actress Oscar nomination for playing a black woman in SARATOGA TRUNK.  And she was about as black as a bar of Ivory soap.

BLOSSOMS IN THE DUST was recently on TCM.  That's one of the MGM biopics that brought Greer Garson an Oscar nomination for Best Actress.  The movie is in Technicolor.  I was watching this 1941 movie and heard a familiar voice coming from the maid character.  She sounded like Theresa Harris but she looked...different.  As Cleo the maid, Theresa Harris looked...well...darker. 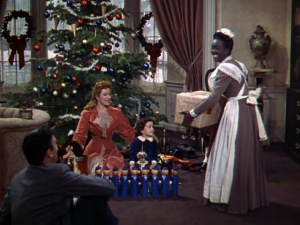 I asked my Twitter buddy @sreggie if he'd ever seen 1941's BLOSSOMS IN THE DUST.  He's a serious Theresa Harris fan.  I wrote him why I was asking.  He replied that perhaps it was just the Technicolor.  I left it at that. 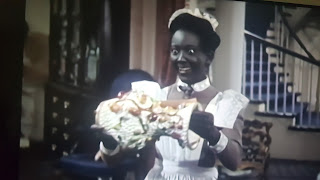 BUT...later in the month...TCM aired the Esther Williams musical comedy NEPTUNE'S DAUGHTER.  That 1949 movie was also shot in Technicolor and it also featured Theresa Harris as the maid.  When I saw her in scenes with Esther Williams and Betty Garrett, I quickly grabbed my cell phone and snapped these pics: 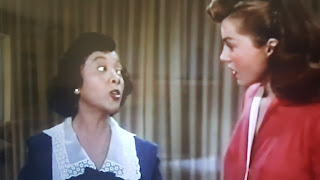 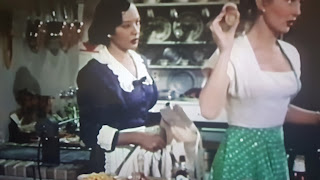 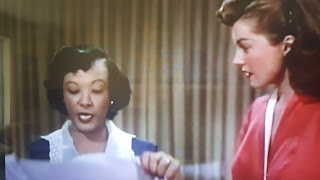 OK, c'mon.  That wasn't just Technicolor in the Greer Garson movie.  Greer looks like Greer.  Theresa Harris looks like she's doing BLOSSOMS IN THE COAL DUST.  I think they made her up to look darker.  But why?!?!?

If someone knows the behind-the-scenes scoop to BLOSSOMS IN THE DUST, please share it with me.  The Greer Garson drama and the Esther Williams musical comedy are both available on DVD. 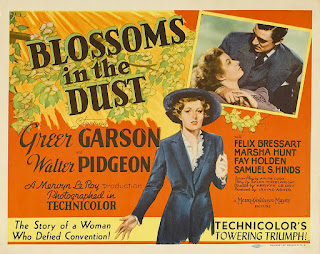