A biopic on the late Susanna Foster could show the sad side of the possessing the kind of talent that Meryl Streep's character longed for in this year's FLORENCE FOSTER JENKINS.  When Susanna Foster was a teen and young woman, she could sail the high C's.  Vocally, that is.  At Universal, where she made most of her movies, she was sort of the junior varsity Deanna Durbin.  Durbin was Universal's queen of musicals in the 1940s in the same way Judy Garland was at MGM.  In fact, in their adolescence, Garland and Durbin sang together in a 1936 MGM musical short.  Judy was already Judy.  Durbin hadn't had her first name changed.  She's Edna Mae.  Judy sang swing and Edna Mae sang operatically.  The story goes that MGM's studio head kept Judy and unintentionally let Edna Mae go.  At Universal, Deanna Durbin rescued the financially troubled studio with the Depression era musical box office champ that embraced the country's love for classical music, 100 MEN AND A GIRL.  She's the teen girl with the great voice who sings with the 100 out of work male musicians.  Deanna Durbin, in her second major Universal film role, was a star -- and the film got an Oscar nomination for Best Picture of 1937.  Reportedly, at the same time MGM was looking at young Judy Garland and Canadian Edna Mae Durbin, 12 year old Susanna Foster landed a contract at MGM.  But nothing happened for her there.  Things wouldn't really pop for her until she, like Deanna, landed at Universal. 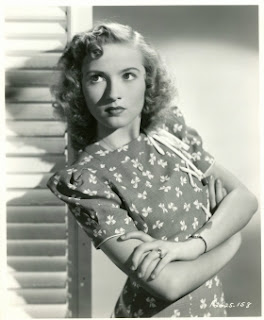 To be frank, Deanna Durbin was a better actress than Susanna Foster.  Like Garland, Durbin had a great, almost instinctive screen acting technique.  Besides the acting talent, Deanna Durbin also had a Lana Turner-like lusciousness.

Foster never got the continuous glamour treatment that Deanna did but she was likable and she could really sing.  In between inactivity under an MGM contract and being hired by Universal, she got the lead in a couple of Paramount comedies.  One is 1941's THE HARD-BOILED CANARY. 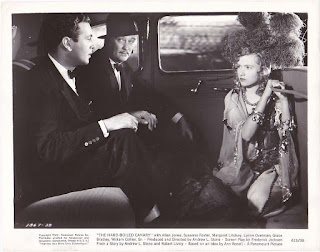 Like Durbin's movies, it tapped into America's love of classical music and showcased real-life child prodigies in that field.  The plot is goofy but the cast gives the assignment a "let's just have fun with it" attitude that floats the story along nicely.  Also, we see the real-life young classical music celebrities of the day playing themselves.  One should have made more movies and another one went on to hit big in a Preston Sturges comedy classic.  For classic film fans, this comedy is a nifty little curiosity piece to see.

The title of the movie was changed -- thank goodness. THE HARD-BOILED CANARY was later called THERE'S MAGIC IN MUSIC.  Let me explain the original title.  The story takes us from a New York City burlesque theater on 14th Street to the renowned Interlochen Music Camp.  A top radio figure hears a great new operatic voice.  But he hears it in that burlesque house.  Toodles LaVerne sings classical music numbers while her sweet partner enters slowly behind her doing a Gypsy Rose Lee bit in harem attire (costumes by Edith Head). 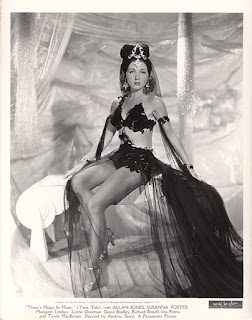 The audience of men goes wild for the dame with the peek-a-boo outfit.  The joint gets raided by the cops.  The partner helpd Toodles flee because Toodles has already done time in reform school.  Young Toodles is a tough-talking dame who learned to sing by listening to opera records.  The radio guy coaxes her to give Interlochen a try.  Once she takes the chip off her shoulders, she fits in.  Toodles is a hard-boiled canary.  Like characters played by Jean Harlow, Barbara Stanwyck and Carole Lombard in the 1930s, she has no problem with making a fist and slugging somebody in the jaw.  Yes, Toodles is a handful. 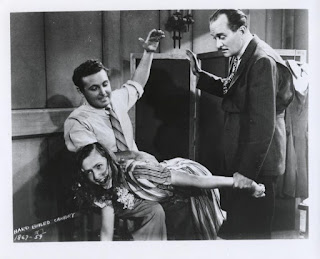 Toodles is a juvenile, so she can't be the love interest for the radio guy played by singer Allan Jones.  He did operatic singing as the romantic lead in A NIGHT AT THE OPERA starring The Marx Brothers.  The adult romantic interest is played by Margaret Lindsay.  She is so relaxed, breezy and warm in this comedy that you expect her to burst into song at any moment.  For classic film fans, Lindsay is probably best remembered as the Yankee that Henry Fonda's character marries in William Wyler's JEZEBEL starring Bette Davis.

Besides her operatic selections, Susanna Foster gets to be "modern" when she sings and does imitations of Marlene Dietrich, Katharine Hepburn, Judy Canova and a popular big band singer of that decade named Bonnie Baker.

Teen violinist Patricia Travers appears as herself.  Unfortunately for movie lovers, she decided not to make any more films.  That's a shame because she's an absolute hoot in THERE'S MAGIC IN MUSIC as the teen grouch.  She's got such a natural early Nancy Walker vibe and delivery that you wish MGM had picked her up and put her in Judy Garland, Gene Kelly or Jane Powell musicals as a comic sidekick gal pal.  Young and pretty classical pianist Dolly Loehr appears as herself.  She'd go on to shine in other movies at Paramount.  After having her name changed to Diana Lynn, she'd get big laughs with Betty Hutton and Eddie Bracken in Preston Sturges' THE MIRACLE OF MORGAN'S CREEK, trade wisecracks with Ginger Rogers in Billy Wilder's THE MAJOR AND THE MINOR and get more laughs in OUR HEARTS WERE YOUNG GAY, a hit comedy set in the 1920s.

When I was a kid, there were two Susanna Foster movies that I loved seeing on TV when I came home from school.  One was Universal's 1943 PHANTOM OF THE OPERA starring Claude Rains as the Phantom.  Foster plays Christine.  From what I've read in a few Hollywood history books, Susanna Foster got the role when Deanna Durbin turned it down.  I saw this film again a couple of years ago.  It's not scary like the Lon Chaney silent version in the 1920s but it's worth a watching for the fabulous singing, the lush Technicolor cinematography and...well, isn't Claude Rains always worth watching? 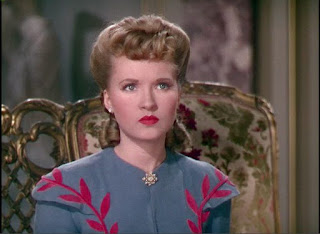 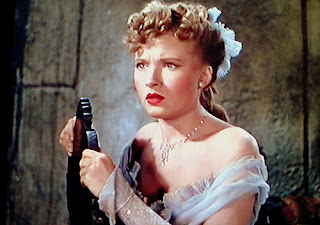 The other Susanna Foster film I loved seeing on local TV when I was a kid is a creepy 1944 Boris Karloff thriller called THE CLIMAX. 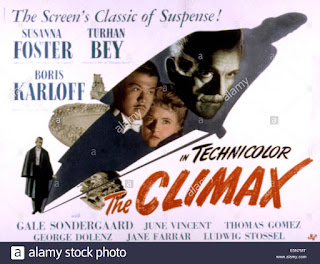 Foster plays an opera singer who resembles the late love of a demented doctor.  He gets a hypnotic control over her vocal chords and wants to possess her. We'll see how twisted he truly is.  I've experienced THE CLIMAX a few times and would love to experience it again.  It should be in a Boris Karloff DVD collection.  In those two movies, Susanna Foster got the A-list glamour treatment.  But THE CLIMAX was her last film.  After that, in the years to come, she endured hard times while also being a devoted relative.  From what I've read, she was popular with moviegoers in her Universal years but she still left movies after THE CLIMAX to rescue her two younger sisters from their abusive alcoholic mother.  In the mid 1950s, after stage work and a divorce, she left performing altogether to raise her two sons.  But her ex-husband was negligent with alimony and child support payments.  Foster worked long hours as a receptionist and answering service operator in order to care for the kids.  In later years, she was reportedly so broke that she was living in her car.  Susanna Foster died in 2009 at age 84.


I found the long-forgotten THE HARD-BOILED CANARY on YouTube under the abbreviated title MAGIC IN MUSIC.  Running only about 1 hour and 20 minutes, it's a fun little movie with a look at some real-life juvenile music talents of the day.