Love me some Harry Connick Jr!  Have you seen his breezy, new daytime entertainment talk show?  His sense of New Orleans fun and love of folks is fused into the weekday program.  No surprise that it's called HARRY.  I'd love to be in the audience for a taping of his daytime show.  And I'd love to be there with a dear friend of mine whom I thought was dead.  A friend I introduced to Harry back in the 1980s when I was a VH1 veejay. 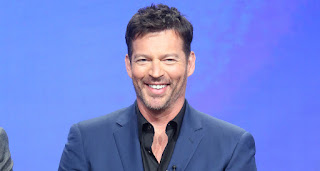 I watched Harry this week as the sudden replacement for the suddenly dumped Billy Bush on the TODAY Show.  Billy Bush had recently moved to Manhattan to host the 3rd hour of the network morning program.  I guessed you heard about what happened.  Harry, whose show is a product of NBC/Universal, was a mighty fine guest host.  He has a hoot giving TODAY anchor Tamron Hall a pop quiz about his career highlights. 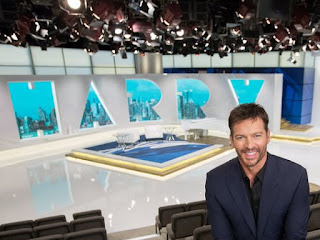 Way back in the late 80s, when I was a daily veejay and talk show host on VH1, one of my favorite spots was on the weekend.  I hosted a shift called SUNDAY BRUNCH.  Harry was a guest on my "Sunday Brunch" show.  The crew and I loved him.  He was seen in heavy rotation on the network thanks to the romantic comedy hit, WHEN HARRY MET SALLY.  Harry's on the soundtrack and he performed one of the songs in a music video that was quite popular with viewers.  When he made appearances on other VH1 programs, he'd pop over and break me up laughing on my show.

Dig this.  One time, I said to him on the air that guys like Bing Crosby and Frank Sinatra started out as popular singers, then became movie actors and went on to win Oscars for their performances.  I asked him if he was interested in acting -- and he said that he was not!!! 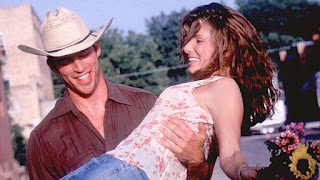 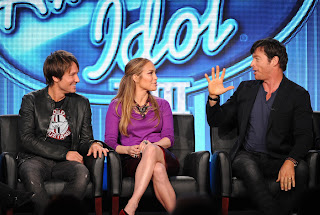 He's since done major roles in movies, he was the leading man in the revival of a hit Broadway musical comedy and he racked up many appearances on TV.  Now he has his own daytime show.

Back in my VH1 days, Harry proved to be so delightful when he stopped by to chat on my SUNDAY BRUNCH, that the network had a viewer contest.  Ten lucky couples, if chosen, would be flown to New York City for a special "Sunday Brunch" with Harry Connick Jr and me.  The viewers and I would have an exclusive brunch in a Manhattan restaurant and Harry would be at the piano for a special Sunday brunch performance.  It was great.

One couple, two friends, came in from New Orleans.  Maurice was a local artist, a sculptor whose work was highly regarded in the area.  Maurice and I became fast friends.  A year later, I went down to New Orleans for Jazz Fest.  I stayed with Maurice and we hooked up with Harry at the festival.

In 2005, I was extremely worried about Maurice went Hurricane Katrina hit. When the hurricane had vanished, I could not get in contact with him for days.  One online source implied that he'd died and was last seen getting senior citizens to safety.  I contacted a newspaper and two local TV stations to see if anyone could get me definite word on Maurice, a popular local artisit.  No luck.  I feared the worst.

A few years later, thanks to Facebook, I heard from Maurice.  To me, it was a miracle.  He'd survived Hurricane Katrina.  He wasn't dead.  But he'd lost everything to the storm.  His home, his personal possessions, everything.  Furniture, photos, phone numbers, everything.  He lost everything...but his life.  Life is funny.  By the time I got that wonderful news that he was alive, I'd lost my home too.  Through the years of making a modest wage in my future TV & radio jobs, I'd taken care of my terminally ill partner and my long-divorced single mother who lived alone.  I'd assumed and paid off the mortgage on her house.  When the Recession hit, I was hit hard as were millions of other Americans.  I was on a national radio show that was cancelled.  I was unemployed for about a year.  I got another job and was laid off from that one just three months later.

Eventually, I was so broke that I lost my once-affordable studio apartment.  It was no longer affordable in a city with skyrocketing rents.  In 2011, I lost my apartment and nearly everything in it.  When I heard from Maurice, a relative had taken me in. A most humbling experience.  I emailed Maurice a photo of us with Harry Connick Jr taken at Jazz Fest.  Maurice's copy was lost to Hurricane Katrina.

Maurice and I both experienced loss and had to start over.  I'd love to be in Harry's TV audience...and that's why I'd love for Maurice to be with me.  And it would be so cool if the three of us could be in a photo again -- one for Maurice to keep.