"Nobody has ever escaped from Stalag 17.  Not alive anyway."  So declares a Nazi colonel.

Billy Wilder's STALAG 17.  This is the World War 2 prison camp drama that brought William Holden the Oscar for Best Actor of 1953.  He'd previously been nominated for Billy Wilder's SUNSET BLVD. and would be one of the top Hollywood actors of the 1950s.  Holden pretty much owned the 1950s at the box office. 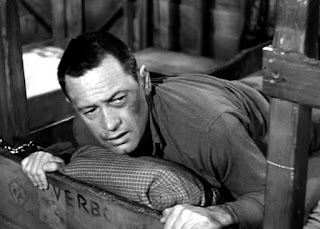 In this war story, American soldiers are held in a German prison camp called "Stalag 17."  Life in the camp is terrible.  Comfort is a rare, make that non-existent thing.  The Christmas season approaches. The Nazi colonel, in the yuletide spirit, tells the prisoners that they'll be deloused for the holidays. Two prisoners attempt an escape.  They're killed.  Suspicion grows among the other prisoners that one of them is in cahoots with the Nazi guards and gave them a heads-up on the escape in exchange for goods like cigarettes and liquor.  Some prisoners suspect that Sgt. J.J. Seftin, played by Holden, is "...the American squealing on Americans." 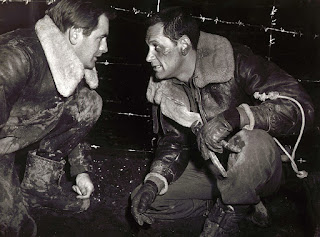 Seftin is a hard-boiled character.  His suspicious fellow prisoners make life tougher for him for a while, but he's a hard-boiled innocent character. Even though he says "This is everybody for himself," he can be trusted. He didn't ratted on his fellow airmen but he's determined to find out who did.

Have you seen this film lately?  I hadn't seen this Billy Wilder movie in years.  It's not one that gets a lot of mention like his other classics DOUBLE INDEMNITY, SUNSET BLVD., SOME LIKE IT HOT, THE APARTMENT and the restored ACE IN THE HOLE.  However, it's worth a look.  I recently watched it twice.

Here's what occurred to me:  STALAG 17 was filmed and released when the entertainment industry was still wounded and bleeding from the blacklisting of the McCarthy era.  Hollywood careers were severely crippled or died due to the witch hunts of the House Un-American Activities Committee.  Friendships ended because of the witch hunts and informing.  The committee was created to investigate disloyalty to the U.S.A.  It hunted down people suspected of having Communist ties.  Senator McCarthy and his sideman, the ruthless Roy Cohn, also went after homosexuals.  (It was recently reported in a documentary for FRONTLINE on PBS that Roy Cohn was the mentor to young Donald Trump.)

To me, STALAG 17 is Billy Wilder's statement on suspicion in the McCarthy era.  In his story, there's danger in Americans turning on each other because of suspicion with no actual proof.  They become tools and future victims of the real villains.  STALAG 17 is a Wilder slap in the face to informers. 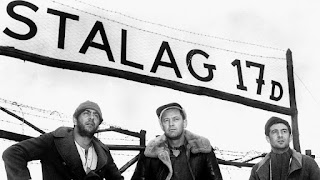 There's underground tunnel action in STALAG 17 just like there was in the 1950 British WW2 prison camp drama, THE WOODEN HORSE, a film that surely had a major influence on the two men who wrote the screenplay for the 1963 hit, THE GREAT ESCAPE directed by John Sturges.

Wilder had a knack for being able to direct other directors in acting roles.  Look at SUNSET BLVD.  He directed Erich von Stroheim, Cecil B. DeMille and Buster Keaton in that masterpiece.  In STALAG 17, Wilder has fellow foreign-born director Otto Preminger playing the Nazi colonel. 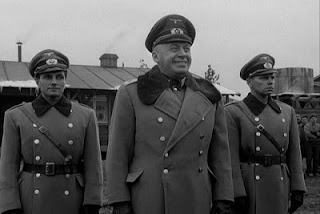 There are some classic Wilder touches in STALAG 17.  There's an "I'm Spartacus"-type moment, only without words, in the prison yard after one American has thrown something at the Nazi colonel.  Robert Strauss and Harvey Lembeck as "Animal" and Harry Shapiro recreate the roles they originated on Broadway.  As with THE SEVEN YEAR ITCH, Wilder took a Broadway play and put his own stamp on the film adaptation.  "Animal" and Harry Shapiro are great comic relief.

When I was a kid growing up in Los Angeles, Gil Stratton was the gold standard for TV sportscasters in Southern California.  He had a highly-recognizable voice, like Vin Scully and, also like Scully, a warm personality combined with top class work as a sports reporter.  I was surprised one day to learn that sportscaster Gil Stratton had a movie career before his long, acclaimed run on local Los Angeles TV news.  Gil Stratton danced with Judy Garland in GIRL CRAZY, he rode with Marlon Brando as a member of the motorcycle gang in THE WILD ONE and he played the best buddy to Holden's character and the narrator of STALAG 17. 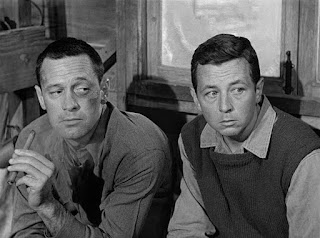 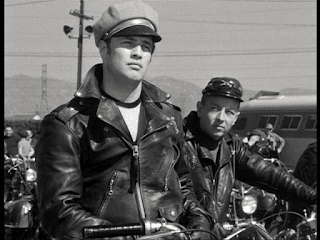 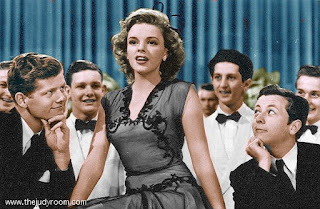 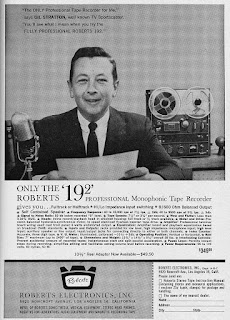 One prisoner gets a letter with some awkward news from home.  He responds, "I believe it."

Come Christmastime, the prisoners have a holiday dance party.  There are no women, so they have to dance with each other.  "Animal" has a thing for Betty Grable, one of the biggest Hollywood musical stars of the 1940s.  A vivacious blonde babe of a singer, dancer and actress, Grable was also famous for her legs.  They made her a #1 pin-up girl for G.I.s during WW2. 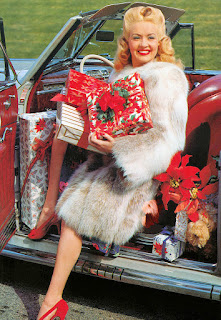 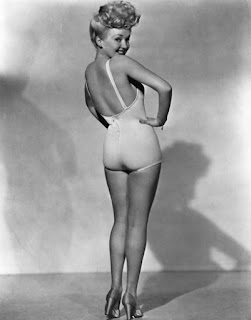 Harry Shapiro puts out-of-it "Animal" in the holiday mood but donning a blonde item on his head to give his buddy a hint of Grable.  Funny dancing ensues. 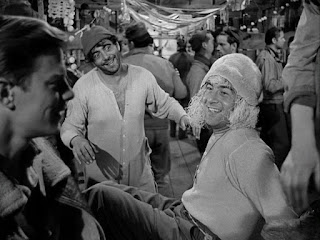 Did you see SOME LIKE IT HOT?  There's a slick "Nobody's perfect"-type moment during the dance.  Pay attention to the "I believe it" prisoner with Harry Shapiro.

Billy Wilder's STALAG 17.  It's about suspicion and loyalty.  And it's very, very good.