I really dig this kind of programming on Turner Classic Movies.  A few TCM fans have been selected be guest programmers and introduce films they love.  The fans get to sit with host, Hollywood journalist and film historian Robert Osborne.

I am thrilled that one fan has picked the British World War 2 drama, Went The Day Well? 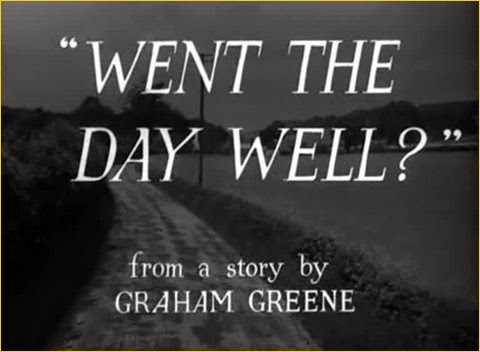 If you're home and you're able to see it...see it.  If you're not home and you have DVR...record it and watch it later.  This film is not widely-known here in the America, but it should be.  To me, there's a touch of the Hitchcock in this movie in that you know from the beginning who the villains are.  You nervously wait until the innocent British villagers make the discovery.  This is a 1942 "wolf-in-sheep's-clothing" suspense story.  I've seen it a few times and each viewing gives me a "Wow" feeling.  I won't divulge much of the plot.  I'd rather you discover the movie for yourself.  But I will tell you that -- like Victor Fleming's 1943 classic, A Guy Named Joe -- Went The Day Well? gives us a look at women we rarely saw in World War 2 movies in the Hollywood studio heyday.  In A Guy Named Joe, Irene Dunne is a WASP, a Women Airforce Service Pilot.  Historically, WASPs flew military aircraft.  Dunne is the only Hollywood actress I'm aware of who played a WASP in combat.  Rosalind Russell's character in 1943's Flight for Freedom was an aviatrix on a secret mission for the government.  She was an Amelia Earhart-type.

In Went The Day Well?, British women are forced to take arms.  They don't passively cheer on their men in battle.  They must become warriors too.  The threat of Nazi destruction is that intense, that near. 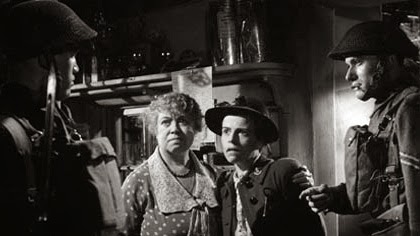 These are ordinary women pushed into extraordinary circumstances.  They must fight. 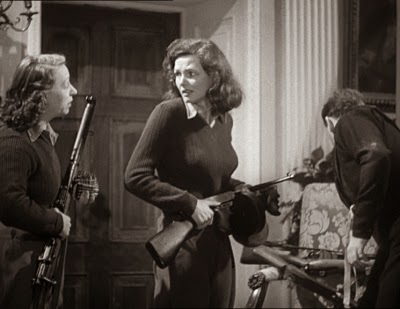 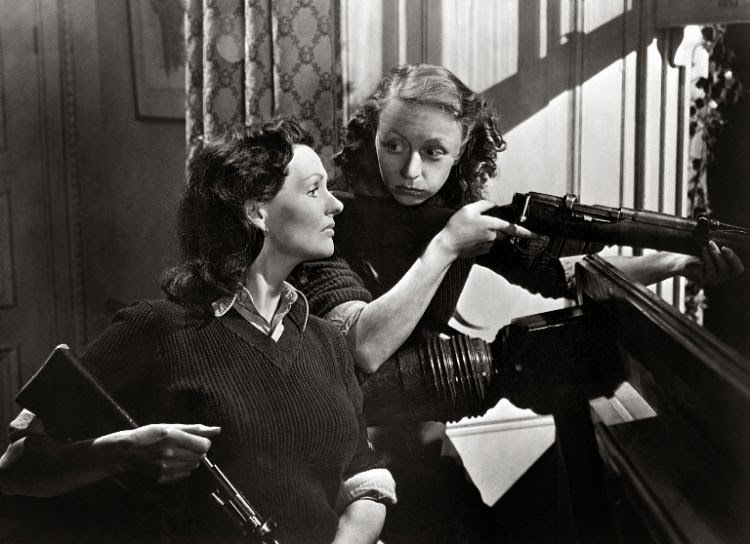 There's also the outer and their internal conflict.  The realization that they must fight and bear arms against evil in order to protect children comes to some when they are in a place of worship.  A church.

I love movies directed by William Wyler and I know classic film fans revere Greer Garson.  However, I find these brave women in Went The Day Well? to be more interesting than Wyler's Garson as Mrs. Miniver because of their...well, their brass ovaries, if you will.  And their brains.  The business with the chocolate bar and the penmanship?  Brilliance.  They're other examples of what I meant by the movie's Hitchcock-like touches. 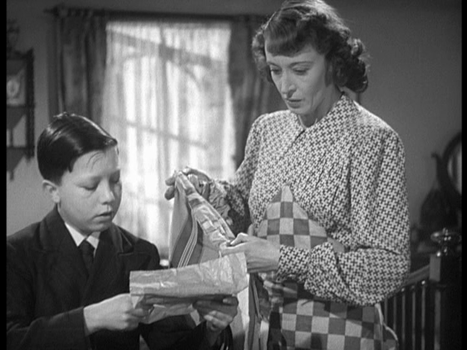 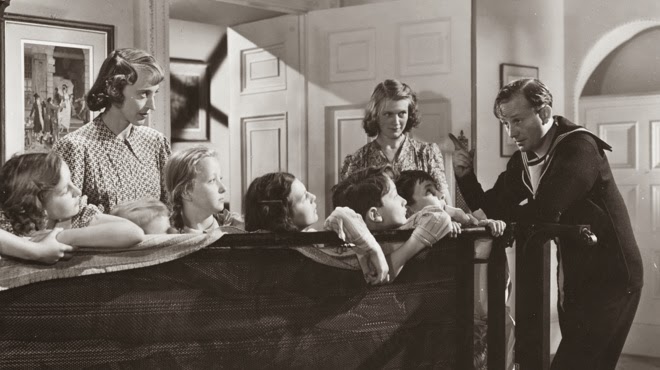 Give Went The Day Well? a look.  A very interesting, very suspenseful war drama with women taking an active part in battle.

Now...let me tell you about a battle I had with my ex-executive producer.  And the battle involed Robert Osborne.

After my Entertainment Editor gig on ABC's Lifetime Live ended when the show was cancelled in 2000 (see a clip in my "5 Must-See Movies" post from a few days ago), I started years of pitching myself to TCM for a segment producer, copywriter or promotions department job.  Classic films are my passion and working behind the scenes for TCM would've been a dream job for me.  As I've mentioned on my podcast, I never got a TCM job but I did get contacted that my demo reel and resumé had been viewed.  In 2006, I was picked by Whoopi Goldberg to be the movie reviewer on her syndicated weekday morning show.  During my years on her show, TCM producer Darcy Hettrich emailed me for advice on how to contact Whoopi to be a Guest Programmer.  TCM was kind enough to view my demo reel, so I did Darcy a solid and cut out her having to deal with an agent or publicist.  I asked Whoopi personally when I sat next to her at work.  She enthusiastically said "Yes!" and gave me the name of four classics to email back to Darcy.

A couple of years later, I was a contributor on a national TV program.  I won't reveal the name.  It was a weekly magazine show targeted at the baby boomer audience.  I pitched doing an interview of Robert Osborne.  My segment producer loved the idea.  Osborne is a top Hollywood journalist, his career took off in his middle age with advice from TV legend Lucille Ball, and he's been bringing young viewers into the world of classic film art.  He has terrific Hollywood stories about his early career as an acting hopeful and his later career as a respected journalist and TV host. 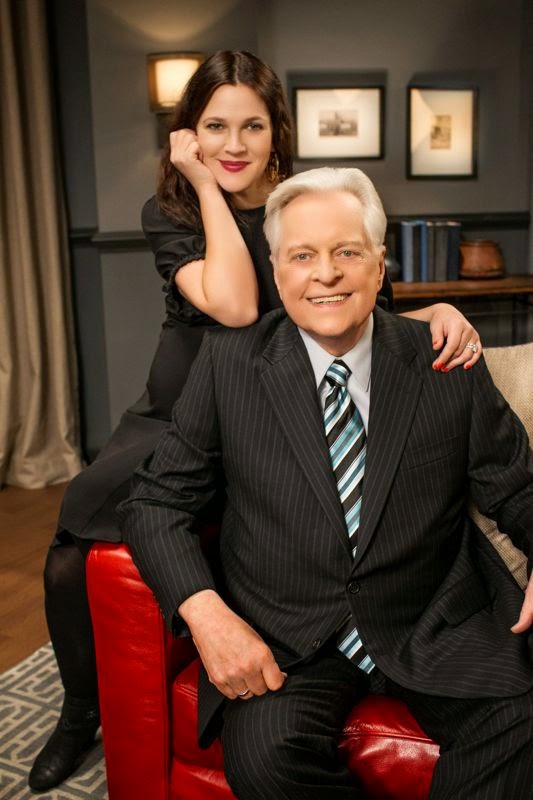 As I minority, I'm not the only one who appreciates TCM's embrace of diversity.  Hispanics, Asians and Native Americans have received month-long salutes.  We African-Americans were saluted one year in May.  That's a major ratings month.  We didn't get February, the usual Black History Month and the shortest month of the year.  We got May!  To us, Mr. Osborne was a rock star.

I contacted TCM and the New York City reps could not have been more helpful.  I had a place in Broadway's theater district where we'd tape the interview.  TCM would help me out with promotional footage.  Mr. Osborne was scheduled for the interview.  My cameraman and audio man were eager to meet him.  So was I.

Then my dear segment producer called me with the bad news.  Her frustrating boss felt that my interview with Robert Osborne would only work if it had "shtick."  I called him directly to see what he meant.

He felt that I needed to dress in drag for the Osborne feature in order to make it interesting.  Yes, you read that correctly.  He wanted me to dress as Norma Desmond in Billy Wilder's Sunset Boulevard to spoof the fact that TCM shows old movies.  My jaw dropped down to my arches.  This was the executive producer of a national TV show.  I reminded him that another contributor taped an interview of pianist/singer Michael Feinstein, but he didn't have to dress up like a flamboyant Liberace playing Vegas.  Why would I, a man who had his own prime time celebrity talk show on VH1 (see same "5 Must-See Movies" blog post for clips of that too) have to perform silly "shtick" for an interview?  Then I told him that Norma Desmond wasn't black.

The executive producer told me that either I do the funny bit or the feature wouldn't air.  I refused to put on a dress.  I chose to cancel my interview with Robert Osborne and I told the TCM press people why.  I did not want to disrespect his TCM work and I did not want to make a fool of myself.

My segment producer quit.  The executive producer eventually fired me.  But I stood by my decision.

We all have our battles.  Enjoy Went The Day Well?  It airs Wednesday, April 9th, at 9p Pacific time, midnight Eastern.