He was handsome.  He was talented.  He had guts.  He was a star who died too soon. 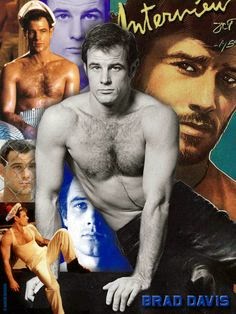 One of the highlights of this year, so far, for me was hugging and interviewing Billy Hayes one afternoon in New York City.  The writer/actor was performing his one-man show smack dab in the heart of Manhattan's Broadway district.  He got a great New York Times review.  A couple of weeks after our interview for my podcast, he was off to London to perform his show there.  Bravo, Billy!  This is a great new chapter in his colorful life. 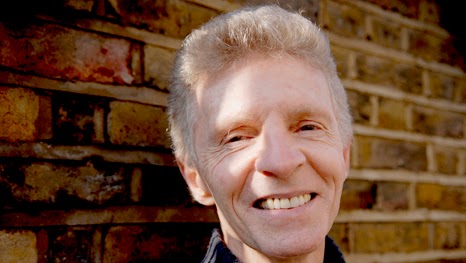 His show focuses on the rest of the story after his famed Midnight Express.  He was the U.S. college student caught trying to smuggle hashish out of Turkey.  Hit with a severely long jail sentence in those days of the Nixon administration.  Billy Hayes escaped from that brutal Turkish prison.  His best-selling memoir was adapted in a big hit action movie. 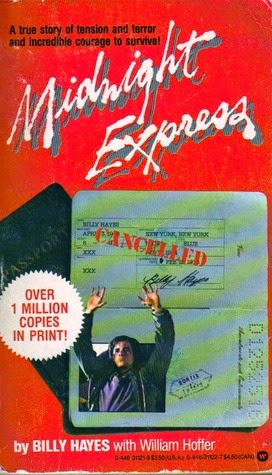 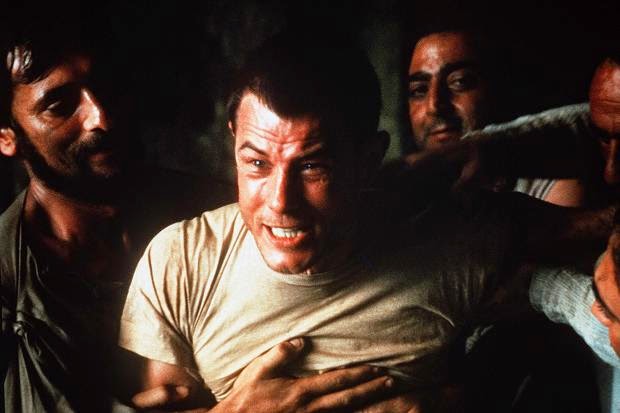 Brad Davis had been seen in two critically acclaimed, high-rated TV mini-series -- Roots (1977), based on the Alex Haley best-seller and Sybil (1976) starring Sally Field as a young woman with multiple personalities.  Although not blond like Billy, he won the lead role in Midnight Express .  Playing Billy Hayes made Brad Davis a movie star.


Today, Brad Davis seems to be somewhat forgotten even though he was the star of one Best Picture nominee, Midnight Express, and starred in a Best Picture Oscar winner, 1981's Chariots of Fire.  A wistful look and a tender little smile lit Billy's face when I mentioned Brad's name in the first part of our interview.  I knew then that I wanted to talk some more about the actor who played him onscreen.

At a time when actors were closeted and afraid of any non-heterosexual relationships being discovered by the press, Davis was openly bisexual and unafraid to play gay characters.  Off-Broadway in 1985, Brad Davis originated the role of Ned Weeks in Larry Kramer's AIDS drama, The Normal Heart.  This play opened during the early, nightmarish period of the AIDS epidemic in New York City.  I remember it well, the period.  I had just moved to New York.  The crisis touched all our lives.  In the upcoming HBO production of it, the character first played by the late actor is now played by Mark Ruffalo.

Brad Davis may not have had the range of a Daniel Day-Lewis or Javier Bardem, but he was a brave actor at a time when bravery was needed.  He committed to his roles and did the work.  I feel his career and his work should be remembered now that there is more acceptance of diversity in show business.  In his way, he was a trailblazer.

In next week's podcast, coming up on April 14th, you'll hear a second part of my Billy Hayes interview.  I wanted to hear Billy's memories of his late friend, actor Brad Davis.  I think you'll learn more about Brad and Billy.  At the time of Brad Davis' movie and stage stardom, I was just starting my professional broadcast career as an entertainment correspondent.  Word had it that Davis was getting fewer big movie offers because he was openly non-heterosexual. Billy candidly tells us the real story.  You'll also hear some funny behind-the-scene stories about making Midnight Express.

Times have changed in the entertainment industry.  William Hurt, Tom Hanks, Sean Penn, Charlize Theron, the late Philip Seymour Hoffman, Christopher Plummer and Jared Leto all won Oscars for playing gay characters.  Ellen DeGeneres hosted the Oscars and hosts a hit daytime talk show.  Chaz Bono, born a female, was a popular male contestant on ABC's Dancing With The Stars.  Gay men are now stock characters on each major reality show, especially if the shows involve fashion or home design make-overs.  Gay marriage is accepted in some states.  At the time Brad Davis was acting opposite Sally Field in Sybil, no network would've given us a sitcom like Modern Family with the two gay male dads.  People forget that, back in the early 1980s, Tony Randall battled NBC to let him play the middle-aged gay paternal man on Love, Sidney openly and not keep the character closeted to appease conservative sponsors.  Randall was pissed when the network caved in possible conservative displeasure.  Randall's Love, Sidney sitcom lasted from 1981 to 1983.

One of Humphrey Bogart's most famous performances was the one that brought him the last of his three Best Actor Oscar nominations.  He was the paranoid navy Commander Queeg on trial in 1954's The Caine Mutiny.  In the open of my podcast next week, I tell Jesse that Davis took on the role in a CBS TV adaptation.  I loved the different interpretation Davis gave to Cmdr. Queeg.  He seemed to use his true sexuality to give the character's conflict a different texture.  It was a vivid and inspired acting choice just a few years before we experienced the "Don't Ask, Don't Tell" controversy regarding gays in the military during the Clinton Administration.

Davis also did notable work as the sexually adventurous and tough sailor in Querelle, a 1982 film directed by Rainer Werner Fassbinder, and when he took on the lead role in the 1985 TV biopic mini-series, Robert Kennedy and His Times.

Thank you, Billy Hayes, for your time and for helping me keep the memory of actor Brad Davis alive.  Hear us discuss the actor who took us on the Midnight Express.  The interview goes up for a week starting Monday, April 14th, on BobbyRiversShow.com.

Larry Kramer's The Normal Heart premieres next month on HBO.