Sidney Poitier and James Garner lookin' fierce on the frontier in Duel in Diablo.  That may not be a memorable western like Shane, High Noon, The Searchers or the Clint Eastwood westerns of the 1970s, but it's memorable in our Rivers Family history.  When my brother, the youngest and most fidgety of us three siblings, was old enough to sit through a movie in a walk-in versus a drive-in theater, the first movie we saw together as a family was Duel in Diablo starring Academy Award winner, Sidney Poitier.  What a thrill! 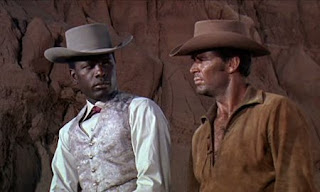 To this very day, one of my favorite things in life to do is to go to the movies on a rainy weekend afternoon. On a rainy Saturday, we all went to an ornate L.A. movie theater.  The five of us -- Mom, Dad, my sister, my brother and I -- sat on comfortable red-cushioned seats and watched Sidney Poitier on the big screen.  In our home, Sidney Poitier was a reason to go to the movies, whether they played at a drive-in or a walk-in theater.  One thing I always noticed when we went to his movies:  There weren't just blacks folks in the other cars or the other theater seats.  White folks also went to see The Defiant Ones, Paris Blues, Lilies of the Field, Duel at Diablo, A Patch of Blue and To Sir, with Love.  When I was a kid growing up in South Central Los Angeles, a child of the Civil Rights era, seeing Sidney Poitier onscreen made me feel significant.  I think he made my parents feel the same.  He was a box office star.  We supported him.  We knew his struggles.  We all sat around a black and white television and gasped with joy when his name was read as 1963's Best Actor for Lilies of the Field.  Honestly, I think he was better as Detective Virgil Tibbs in In the Heat of the Night, the Oscar winner for Best Picture of 1967.  But Sidney's Academy Award triumph was not just for that hit comedy/drama, Lilies of the Field.  It was for that plus No Way Out, Blackboard Jungle, A Raisin in the Sun and The Defiant Ones.  It was for being a fine Broadway actor who kicked a giant hole in Hollywood's color barrier.  Not only was his being the first black man to win Best Actor historic, so was Anne Bancroft's ecstatic reaction when she read his name.  (You can find that clip on YouTube.) 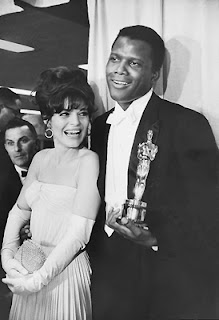 In the 1960s, some network TV executives were racially unenlightened.  They did not want white and black entertainers to touch each other beyond a handshake.  Harry Belafonte, Petula Clark and Mitzi Gaynor had to deal with this nonsense.  Anne Bancroft kissed Sidney congratulations on live network television.  One of my favorite and least talked about Poitier performances is as the American in Paris Blues.  Martin Ritt's tale of two jazz men in Paris and the ladies they meet starred Sidney Poitier, Paul Newman... 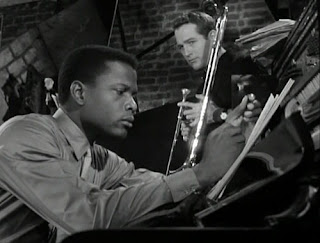 ...Joanne Woodward and Diahann Carroll.  This 1961 film is still hip.  If I was picked to be a Guest Programmer with Robert Osborne for one night on Turner Classic Movies, this is one of the films I'd present.  You see the faces of more black people in the first fifteen minutes of this 1961 movie than you did in the first two hour-long episodes of ABC's Pan Am, a show set in New York in 1963.  And I don't just mean black people with dialogue.  That includes background actors on the ABC series.  Set in...New York. 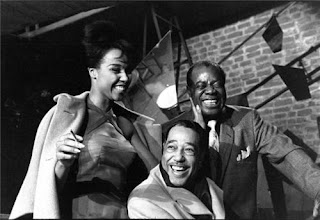 Diahann Carroll and Joanne Woodward as girlfriends vacationing in Paris.  Diahann, looking trés chic in her first scene, gets a flirt from...Paul Newman.  THAT was major for the early 60s. 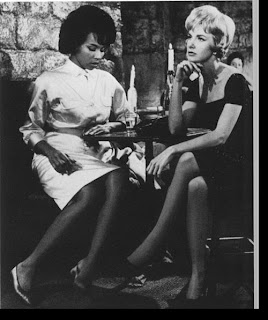 Sidney and Diahann do wind up dating and debate whether or not things are really changing racially back home in America.  Are they really free in the Land of the Free?  Paris Blues is still worth seeing. 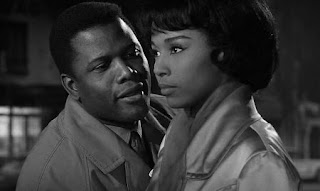 It's also the first film that treated jazz genius Louis Armstrong with the dignity he deserved.  Martin Ritt cast him as jazz legend "Wild Man" Moore, a sophisticated artist with a huge international fan base.  It's the best film role Armstrong was ever given. 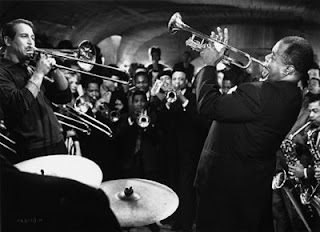 Box office favorite Sidney Poiter starred in two big hits that were two of the five Oscar® nominees for Best Picture of 1967: Guess Who's Coming to Dinner? co-starring Spencer Tracy and Katharine Hepburn... 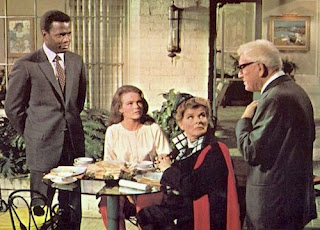 and Norman Jewison's Best Picture Oscar winner, In the Heat of the Night co-starring Rod Steiger. 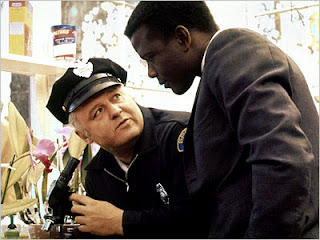 Steiger won Best Actor for that film.  Poitier wasn't nominated for either 1967 movie, but his work as Det. Virgil Tibbs is classic Sidney.  That movie meant ever more to me as I got older.  I've gotten that racially charged "too articulate" criticism from white men and I've dealt with the attitude that I was too "uppity", meaning that I was educated and wanted equal treatment.  The sudden slap Det. Tibbs delivered was a slap that spoke for us all.  In this day, when President Barack Obama has been called things like "the food stamp president," it still speaks for us.  When George Lucas reports that Hollywood wouldn't give him a green light to produce and promote a true tale of black World War II heroes because African American stories with black actors aren't "marketable," it still speaks to us.  When Don Imus can call black female Rutgers University athletes "nappy-headed hos" on MSNBC, get in trouble and come back with a new multi-million dollar national broadcast gig while entertainment press reports on the lack of racial diversity in TV & Hollywood casting, it still speaks to us.  When no network morning news show ever had a black film critic on staff who could review movies and tell us that Sidney would be receiving an honorary Oscar in 2002 for lifetime achievement, it still speaks to us. 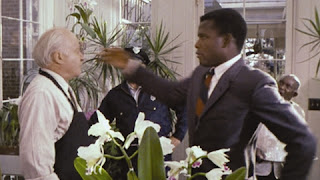 Today is Sidney Poitier's 85th birthday.  I am so grateful to him for making me -- then and now -- feel significant.