A Legend On My Lap

I was the first African American to do regular movie reviews and celebrity interviews on Milwaukee television.  WISN, an ABC affiliate, is the station that started my on-camera career.  Some of my celebrity interviews got picked up for national airing on the syndicated 1980s show, PM Magazine.  Five years after my professional TV debut there, I got discovered by an executive at WPIX.  I left the Midwest to work on local TV in midtown Manhattan.  Leaving WISN in Milwaukee for WPIX in New York City was like going from Dorothy Gale's humble farm to the Emerald City in The Wizard of Oz.  One day, you're on the #30 Jackson Downer bus on the east side of Milwaukee.  The next thing you know, you're sharing a cab with Quentin Crisp one night on the lower east side of Manhattan.  New York City was amazing in the '80s.  And overwhelming.  Noted entertainment journalist Liz Smith and I worked in the same building.  At the time, she was a syndicated columnist for The Daily News.  I'd interviewed her on WPIX/Channel 11. 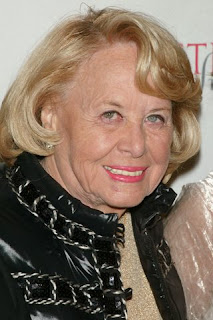 I got invited to a New York celebrity-packed wedding reception one afternoon.  Liz was there.  So was my hysterically funny and sweet buddy, the late Larry Ashmead, the much-respected executive editor of HarperCollins books. 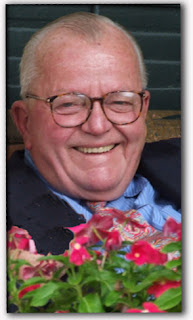 Larry told me great stories of working with Broadway's brassy, outspoken Ethel Merman while she was writing her autobiography.  It was Larry's idea to leave a page blank after he read what "The Merm" had written about her short marriage to actor Ernest Borgnine.  That blank page of "comments" on Borgnine caused buzz.  Merman's blank page was mentioned just last night in ABC's 20/20: HollyWed, a look at celebrity marriages.  Clever idea, Larry. 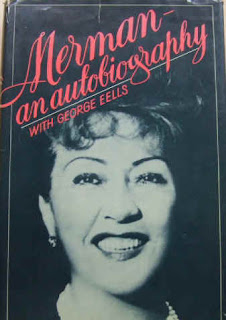 Liz, with her friendly Texas drawl, said "Bobby, have you met Maria?"  She introduced me to Maria Riva, daughter of film star Marlene Dietrich.  Ms. Riva and I chatted about the book she was working on -- a book about her international superstar mother. 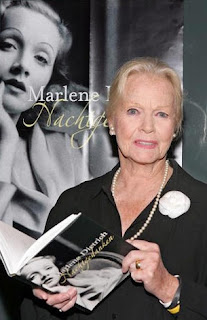 Later Liz and Larry invited me to sit at a table and meet Elaine Stritch.  "Hiya, kid," Stritch said, greeting me with a smile and a warm handshake.  I wished her, "Good luck with the new show."  "You've seen it?!?," she answered and, with that, got up from her side of the table, came over to me and sat on my lap.  Yes.  Stritchy sat on my lap."  The show was The Ellen Burstyn Show, a new 1986 sitcom on ABC.  Ellen Burstyn, Elaine Stritch, Megan Mullally and comedian Barry Sobel.  Go to YouTube and search "Barry on Carson" to see Sobel with Johnny Carson on The Tonight Show.  He was -- how do I put this -- the Caucasian homeboy of the late '80s.  On my lap, wearing a skirt that showed off her great gams, Elaine Stritch put her arm around my shoulder and said with that life-soaked raspy voice, "OK, tell me what you really think of the show."  Then her eyes sort of leaned on me. 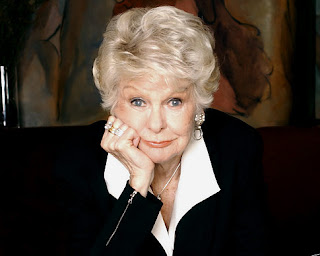 It took a lot to keep my composure and not squeal with glee like a teen girl who'd won front row tickets to a pop star concert.  I thought to myself, "This is so New York City!  A year ago, a TV exec in Milwaukee told me I'd never get to New York.  Now I'm here and Elaine Stritch is sitting on my lap.  'I'll drink to that.  And one for Mahler!' Wow."

We finished reviewing her sitcom.  She thanked me, gave me a little hug and said, "Well, Bobby, I gotta go to the ladies' room and shoot up."  I watched her walk off, my eyes were the size of dinner plates.  Liz Smith was laughing.  Larry Ashmead was laughing.  "Don't worry, honey," Liz drawled."  "Elaine's not a drug addict.  She's diabetic."

This week, Liz and Elaine shared a birthday on the same day.  The entertainment journalist is 89.  The original cast member of Stephen Sondheim's Company is 87.  I can't remember who got married that day of the reception.  But I do remember the thrill of Elaine Stritch, a Broadway musical legend, sitting on my lap and chatting with me like we were old acquaintances.  What a great New York moment.
at February 04, 2012