On Billy Crystal and Oscar Stuff

I admit it.  I did cringe at part of the opening movie spoof montage Billy Crystal did for the Oscars telecast.  He did what I was hoping he would not do -- his imitation of the late Sammy Davis, Jr.  Crystal got big laughs doing that characterization on Saturday Night Live in the mid-80s.  But audiences have grown up since then.  Sammy died in 1990.  Some young Oscar viewers, some young entertainment reporters, probably don't even know that Billy Crystal was a regular on SNL at one time.  Crystal did an old TV comedy bit in a new century and, to many viewers, it came off like "blackface."  They were offended.  This made me wonder if Crystal had any African American friends in his writing team who could say, "Hey, Billy, you may not want to do that Sammy bit  -- especially since it leads right into your spoof of The Help, a movie about racism that sparked controversy about racial images."  The Oscars show, in a way, was a salute to Hollywood of the 1920s.  A silent film won the Best Picture Oscar and a white male star performed on camera in blackface.  Like Al Jolson did.  Crystal would've been fine without the Sammy bit.  Not a wise choice for today's audience.  It made him seem a tad dated. 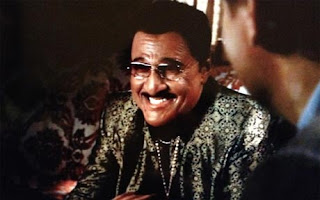 In a sharp Los Angeles Times article entitled "Oscar's aging audience:  Time to shake up the Academy?," Patrick Goldstein accurately cuts to the core of what went wrong and what needs to be considered in Hollywood for advancements in diversity.  Goldstein wrote that executive offices are "bereft of people of color."  To that, I add the lack of black film critics and movie hosts seen on TV.  The network morning news shows never had a black person doing weekly film reviews.  We're still pretty obscure every year when those shows have movie critics and contributors in place to predict and comment on the annual announcement of the Oscar nominations.  Black talent is prevalent on TV news in the sports and weather segments but rarely seen doing film and stage reviews.  Does this imply we don't know anything about the fine arts?  That we don't care about them?  I've reviewed films on local and network TV.  As you can see if you read my previous blog, "Black Talent, Hollywood Gold," Elvis Mitchell and I are not the only African Americans who can talk about movies.  Hollywood needs to know that, to see that.

There's another area that sorely needs more racial diversity for Film/TV performers on both coasts:  Representation.  I have at least 10 years of national TV work to my credits.  Almost all of that work I got without an agent.  For over 20 years, I've been in the TV business.  I have had meetings in top agencies and some not-so-top agencies while seeking a broadcast agent.  In all that time, in all those offices in New York and LA, I've seen only two black people who were talent agents.  And both were gone from their agencies a year later.  Did you ever see a black agent on Entourage?  Nope.  When top film/TV stars attend fabulous functions with their high-powered agents and you see their picture in a magazine, is the agent usually black?  Nope.  Trust me on this, being a minority and trying to land your own work, auditions and meetings without the benefit of an agent is a heavy load to carry.  That's in addition to trying to crash through color walls.  I did a good pilot for a TV game show back in 1992.  Later, I found out that executives were concerned.  Not with my performance which, the crew told me, was very good. Executives wondered if America would accept a black TV game show host.  Yep.  The color thing.  This is the stuff a Rosie O'Donnell, Carson Daly, Mo Rocca or a Billy Bush don't have to deal with.  They won't hear, "You're talented but you're Caucasian.  Will TV viewers accept you?"  It's also the stuff a lot of my white liberal friends and acquaintances don't seem to get.  They see discrimination in a movie like The Help but they think it's all a level and fair playing field here "up North." Especially in the entertainment business.

I don't want to make this "all about me" but I'll share a personal story to give you an idea of how that lack of racial diversity in our business can wear your spirit down.  I hosted two talk shows on VH1 in the late 80s.  I was the first black person to get his own prime time talk show on VH1.  I got solid reviews from The New York Times, TV Guide and People Magazine for my work.  Here are some of the guests who were on my VH1 shows:  Kirk Douglas, Norman Mailer, Meryl Streep, Carrie Fisher, Debbie Reynolds, Shirley MacLaine, Liza Minnelli, Hume Cronyn & Jessica Tandy, Alan Rickman, John Cleese, writer/directors James L. Brooks and Spike Lee, Phil Collins, Carlos Santana, Joan Baez, Dolly Parton, Studs Terkel, Dominick Dunne, Anne Rice, Smokey Robinson, Gregory Hines, Sally Field, Marlo Thomas, Ben Kingsley, Michael Caine and original King Kong star, Fay Wray.  VH1 flew me to London for an exclusive hour-long interview of Paul McCartney.  Broadcast agents in New York City were still turning me down saying "I wouldn't know what to do with you."  In 1991, the year after my VH1 contract expired, I met with a Manhattan broadcast agent named Conrad Shadlen.  A lovely man, he's since gone on to his heavenly reward.  Conrad said he'd have problems placing me. However, he said, "If you did weather, I could get you a job on a news show in a heartbeat."  See what I mean?  I've had a heavy load to carry in my broadcast career.  I never had another opportunity to host a national TV talk show after my VH1 years.  Considering that most of my broadcast career has been without an agent, I've been pretty lucky to get the work I did.  But think about what actors like Cicely Tyson, Angela Bassett, Alfre Woodard and Louis Gossett must go through being black and trying to get another script, another opportunity, as good as the one that got them each an Oscar nomination years ago.  I was invited to meet with an agent at a top NYC agency back in 2008.  At the time, I was seen on Food Network Mondays through Fridays hosting a show called Top 5.  The show was in repeats.  In the mornings, I was on national radio with Whoopi Goldberg as a regular on her weekday show for Premiere Radio.  (Yes, Whoopi Goldberg had a morning radio show before she did The View.)  That agent did not say "I wouldn't know what to do with you."  She asked if I'd ever done any on-camera work.  I kid you not.  I still could use a little help.  More equality is needed as much offscreen as it is onscreen.  The more it's embraced in the entertainment industry, the more the fine arts win.
at February 28, 2012