The Academy Awards.  Hollywood prom night.  Who's going home with the Hollywood gold? 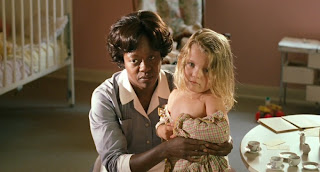 Some members of the entertainment press jockeying for face time with stars on the red carpet at tonight's Oscars may be concentrating more on "Who are you wearing?" than history.  But history could be made.  Will Viola Davis become the second black woman to win the Best Actress Academy Award?  Halle Berry was the first.  Viola is now the second black woman to have more than one Oscar nomination to her credit.  Whoopi Goldberg was the first.  Both have a nomination in the Best Actress and Best Supporting Actress category.  Meryl Streep could make history as the third woman to win a Best Actress Oscar for a performance in a film directed by a woman.  There was Holly Hunter's win for The Piano directed by Jane Campion and Charlize Theron's Oscar for Monster directed by Patty Jenkins.  As The Iron Lady, she was directed by Phyllida Lloyd.  Meryl Streep has been nominated twice in the Best Actress Academy Award category for a performance directed by a woman.  She was in the Oscar race for Julie & Julia directed by Nora Ephron.  That's a golden nugget for Women In Film history.  Brava, Meryl.   In this year's Oscar race, no Hollywood film sparked so much passionate criticism and dialogue as The Help with its topic of race. The Viola Davis and Octavia Spencer nominations, to me, are well-deserved.  The criticisms the movie started about Hollywood racial images onscreen and racial diversity offscreen are also well-deserved. 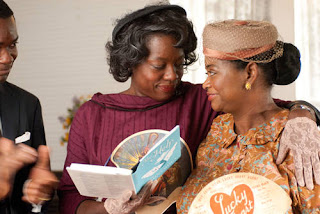 Viola Davis is a terrific, versatile actress.  She's made Oscar history with this second nomination alone.  She has no film projects in development, according to IMDb.com.  Jennifer Aniston has four.  Katherine Heigl has four.  Adam Sandler has nine.  Seriously?  That's why the criticisms shot at Hollywood on the lack of opportunities for minority actors are accurate.  In its way, The Help helped.  Fences, the drama by legendary playwright August Wilson, won the Tony Award for Best Play.  James Earl Jones won the Tony for Best Actor.  It won the 1987 Pulitzer Prize for Drama.  The 2010 Broadway revival scored 10 Tony nominations.  It starred Viola Davis and Denzel Washington. 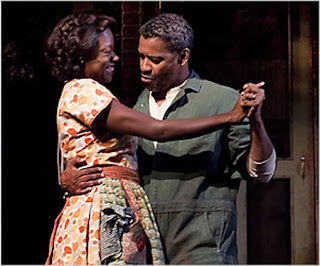 Hey, Hollywood, why can't we get Ms. Davis to star in a film adaptation of that award-winning Broadway drama?  There's an idea for you.  As we can tell from the annual list of actors nominated for Oscars, Hollywood loves a bio pic.  Patsy Cline, Ray Charles, Johnny Cash, Edith Piaf and members of Britain's Royal Family have gotten actors invited to Hollywood Prom Night thanks to their big screen biography performances.  Here's another idea:  Viola Davis as larger-than-life singer Dinah Washington. 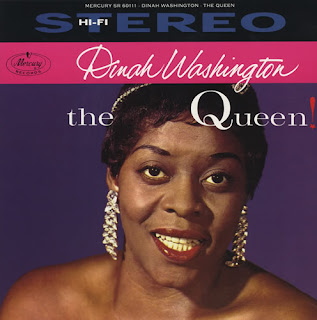 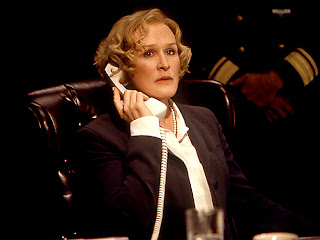 If I was back on TV doing film commentary and reviews again, I'd mention all that.  There's long been a need for racial diversity on television in the film critics area too.  Many viewers grew up seeing Siskel & Ebert, Gene Shalit and Joel Siegel review movies on network morning news programs and syndicated TV shows.  CBS Sunday Morning has David Edelstein. Jeffrey Lyons and his son, Ben, have reviewed movies on national TV.  Black film critics are rarely seen on TV and we're over a decade into the 21st century. Our exclusion in the film reviewer/historian and movie host category bothers me.  A lot of us can do that work, you know.  I know I can.  Elvis Mitchell is not the only black person in America who can talk about movies.  I like Elvis, but he's not the only one.  He's often just the only one Anglo network TV producers let you see.  So, I want you to meet some folks.  When it was announced that PBS would premiere Roger Ebert Presents 'At The Movies,' I was thrilled.  Initial reports told us that long-haired film critic Elvis Mitchell and Omar Moore would be regulars.  Omar Moore deserves TV airtime.  He's a fine writer and has great film smarts. He's also comfortable on camera. 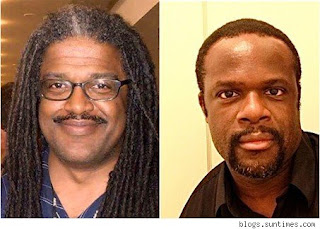 The first publicity photo that accompanied the press release announcement of the show had a racially diverse group.  I loved it! 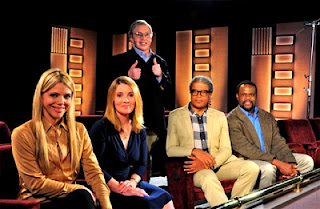 Then something curious and unexplained happened.  Elvis had left the building.  Mr. Mitchell was no longer with the show.  Mr. Moore was still with the show but not seen in the new publicity pics.  Blonde Christy Lemire and her new co-host, a young fellow with a name something like Ignatz Ratzkywatzky, were the leads.  Omar seemed downgraded to background actor.  The original publicity photo was racially diverse.  The new publicity pic was oddly...uni-color. 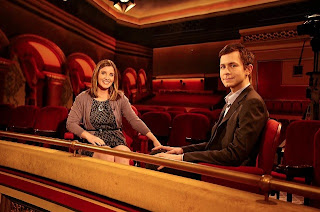 Ebert is one of my favorite film critics.  Those two young hosts were very capable but the sudden lack of color in the new promotional pics broke my heart.  Omar Moore should be on TV more.  89.3 KPCC talk radio in Los Angeles has a fast, provocative, entertaining, smart and non-snarky Friday film review show called "FilmWeek" on AirTalk.  Tim Cogshell is a frequent film critic guest.  He brings it.  He knows his films -- domestic and foreign.  "FilmWeek" is a very good news talk show.  It's even better when Tim Cogshell is in the mix with other movie critics on it. 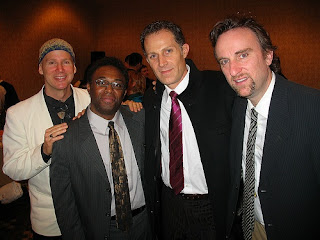 Wesley Morris is well-known to people in the Boston area.  He writes for the Boston Globe and has several film review segments on local and national television to his credit. 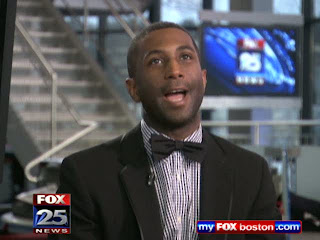 For "Take no prisoners" film journalism, you can always count on the tough and talented Armond White.  Starting in the 90s, his reviews in the New York Press became weekly required reading for me.  Bold, brainy and a big unpredictable force to contend with in the New York Film Critics Circle, he's another black person who also happens to be a film critic. 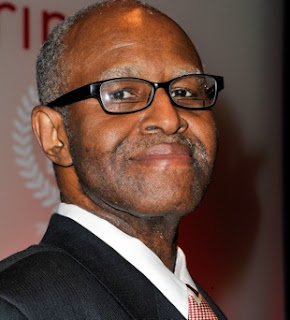 And there you have it.  As Hollywood could make improvements in racial images and diversity in casting, television could do the same in showing Hollywood -- and the movie-going public -- that minorities also know quite a bit about current and classic films.  Enjoy the Oscars tonight.  Who are you wearing?
at February 26, 2012