Tomorrow is Ash Wednesday.  We Catholics go to church and have our foreheads marked with holy soot to remind us that "dust we are and dust we shall be."  It kicks off our season of Lent, the official countdown to Easter Sunday.  We leave our foreheads like that for hours too.  We don't clean the ashes off right away.  After you've left church, you can spot other members of the Catholic club just by looking at the forehead. 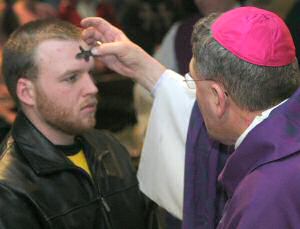 I've spent most of my life as a Catholic.  I was baptised, confirmed, served as an altar boy and did many years in parochial schools being taught by nuns and priests.  Some of our customs I love -- like midnight mass ringing in Christmas Day, the music of it, the spirit of hope and renewal in Easter Sunday masses, the artifacts that were part of my Catholic culture...like rosaries, scapulas, holy cards and holy water.  But the church's archaic views can make me crazy.  The ones rooted in shame, guilt and discrimination.  It really makes me crazy when those musty old views stretch over in the world of politics causing me to wonder whatever happened to America's separation of Church and State.  The Vatican does not approve of gays and marriage equality.  Please.  Enough already.  How can that predominantly male religious corporation proclaim that gays are unacceptable when it makes its guys in the company go to work dressed like this? 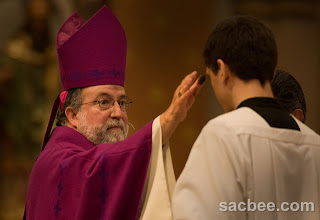 Come on, now.  Would you wear something like that to a Knicks game?  Or headed to the local pub for a beer?  Or to a barbecue?  And the big boss in Vatican City -- the one who's really opposed to gays -- occasionally goes to work dressed like this. 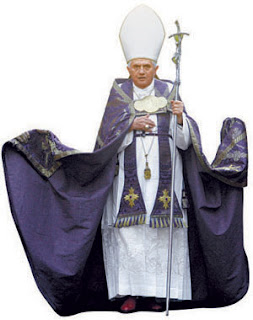 I doubt he wears that on Casual Fridays.  I know you're The Pope, but...seriously.  Could you honestly look at yourself in the mirror wearing that outfit and say to your holy self, "I look butch"?  Jesus kept it simple.  No capes.  However, you and many conservative Christian politicans cannot accept respectable same-sex couples...people who are committed to each other, who live in peace and do unto others as they would have others do unto them.  You have the gay community verbally ostracized and shamed by grown men who wear purple cloaks and fuschia-colored beanies on the job.  Seriously? 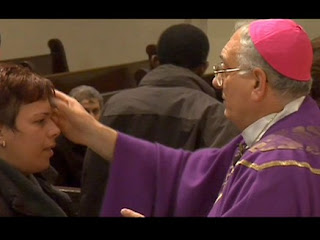 I myself am heterosexually-challenged.  In fact, I'm about as straight as a Slinky®.  And I wouldn't even wear that purple/fuschia color combination to a gay bar in Honolulu.  It would be too...too much.  Someone needs to tell the Vatican that Michelangelo was gay.  That brilliant painter made the ceiling of the Sistine Chapel look like this -- 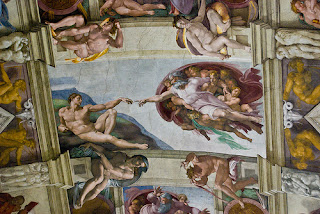 Had he been a conservative heterosexual painter, it could look like this. 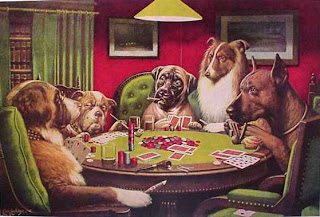 So, here's my Ash Wednesday wish that could quiet or tone down the haters:  I wish that on Ash Wednesday, forty days before we celebrate the Resurrection of Jesus Christ, a purple mark would appear on the forehead of every single American over 21 who has ever had a same-sex encounter of mutual consent.  It wouldn't be soot like the ashes we Catholics receive in church.  It would be a mark on and in the skin that appears on the forehead.  It couldn't be wiped off.  And it would appear just for the 24 hours of that day.  A big purple dot smack dab in the middle of the forehead.  Just like with the ashes, you'd could spot the members of another club thanks to a visible dot the same color as that cape the Pope is wearing.  There could be many surprise discoveries.  As TV host Wendy Williams would say, "How you doin'?"  That might take the "i-n" off some  intolerance.

My late partner, Richard, was diagnosed with full-blown AIDS just four months after our first date.  My church didn't offer much, if any, solace.  It didn't approve of our relationship.  That hurt.  But I committed to Richard.  To the best of my ability, I wanted to keep him from being scared and alone.  I vowed to myself to stay by him and help him.  I gave him the care I would've wanted had I been in his situation.  And he appreciated it.  He was one of the kindest people I've ever known.  He changed my life in our 18 months together.  Richard died in June 1994.  Spiritually, our relationship brought me closer to God, to the essential spirit I believe Heaven to be, than any sacrament I've received as a Catholic.  It wasn't an easy relationship, mostly because of his illness.  It had its horrors.  But my spirit felt so alive with him.  I wanted to be of service.  I felt like the line Jack Nicholson's character says in As Good As It Gets: "You make me want to be a better man."  It insults me when people think a same-sex relationship exists solely below the belt.  Even though he was terminally ill, when he had the energy for it, Richard would go out and do things for others in need, for those who couldn't get out of bed.  What could be more Christian than that?  Had he lived, he'd be a great husband.
at February 21, 2012