I've been looking through my mother's high school yearbook.  In New Jersey, she was in Montclair High School's Class of 1942.  What strikes me about Mom's yearbook is the racial diversity of her class.  Not at all like the depiction of high school classes you saw in MGM, Paramount or other major Hollywood studio movies of the 1940s.  Think of the Mickey Rooney and Judy Garland musicals like Strike Up The Band and Babes in Arms.  Those groups of musical teens eager to put on a show in New York City were all white.  They weren't racially mixed like the Montclair High School boys' soccer and track teams, the girls' basketball and field hockey teams, the Latin club and the glee clubs.  Just imagine if those old Hollywood movie studios had embraced racial diversity.  My mother and her high school classmates in 1942 would've liked that.  One of the things that irked glamorous Lena Horne the most when the singer was under contract to MGM, the Tiffany shop for movie musicals, was that she never got to interact with the studio's white musical stars on camera.  She did featured numbers in A-list MGM productions but her songs were separate from the film's action.  Horne had broken through a barrier in how we blacks were shown in Hollywood films, especially black women, but she was still within margins in a pre-Civil Rights era.  The Hollywood roles for black actors in the 1930s and 40s were mostly under-educated maids or manservants.  This is why I see Casablanca as revolutionary in a sophisticated, subtle way.  Sam, the nightclub headliner played by Dooley Wilson, is a Hollywood breakthrough character. 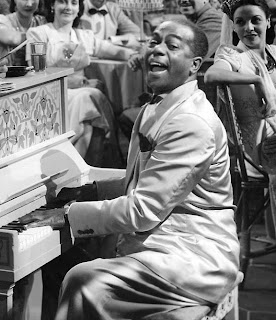 Sam is not a servant, a train porter or a dining car waiter.  He's a top act at a swanky, popular nightclub.  He's also the hero's friend and confidante.  The hero, as famously played by Humphrey Bogart, is Rick Blaine.  He's the tough American who "came to Casablanca for the waters."  It became Hollywood folklore that Lena Horne's elegant MGM musical numbers were shot separate from the movies' main action so that they could be cut out when the movies played down South.  In his fascinating, revealing and under-appreciated Lena Horne biography, Stormy Weather: The Life of Lena Horne, author James Gavin disputes that folklore with evidence while addressing Hollywood racial discrimination of the time.  But Horne absolutely did not get to do scenes and have dialogue with her Caucasian MGM studio co-workers who were the stars of big musicals in which she performed -- stars such as Judy Garland, Mickey Rooney,  Gene Kelly, Kathryn Grayson, Esther Williams, Van Johnson, Janet Leigh and Tom Drake.  She was woven into the action solely in films with all-black casts such as Vincente Minnelli's sophisticated 1943 adaptation of the Broadway musical fantasy, Cabin in the Sky.  She starred in the less sophisticated and oddly-titled 20th Century Fox all-black musical comedy, Stormy Weather.  If Dooley Wilson had not been allowed to do scenes with the Caucasian stars of Casablanca, the 1943 Best Picture Oscar winner, or if key scenes with them had been cut out down South to appeal to bigoted minds, the film would've fallen apart.  As Sam, Wilson's musical numbers are not just featured scenes like Horne's in MGM musicals like Words and Music and Thousands Cheer.  Sam's numbers are the musical backstory.  He acts opposite each star in a key scene that advances the story.  He has history with Rick and with Rick's great love, Ilsa, famously played by Ingrid Bergman.  We sense this history when she, with a wistful smile says, "You used to be a much better liar, Sam."  Try to imagine this movie without Ingrid Bergman saying to Dooley Wilson "Play it, Sam.  Play 'As Time Goes By.'"  What a great scene. 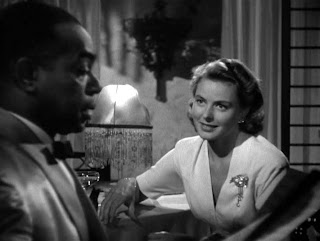 That sets up the heart of this film.  Not only is it a classic Hollywood movie scene, it's a scene critical to that movie classic.  So is another scene with Sam.  He's alone with the movie's hero, Rick.  The nightclub owner, drunk and bitter, makes Sam play it again as he emotionally reels from having been reunited unexpectedly with the woman who broke his heart: "Of all the gin joints, in all the places, in all the world, she walks into mine."
This takes us into the important montage in the Julius and Philip Epstein screenplay.  It shows us Rick and Ilsa's love story and how it was severely, darkly interrupted by the Nazi regime.  Sam was with them in Paris.  The lovers were separated by war.  Ilsa comes back into Rick's life.  She's married.  Sam knows the love story, the secrets and the music that goes with it all.  Here was Sam, a best friend and classy nightclub entertainer.  How many times in an old Hollywood film did you see a black character share a bottle of champagne with -- not just one -- but two Caucasian lead characters? 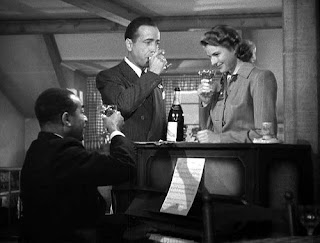 THAT was major.  Whenever there's a TV channel doing a salute to Black History Month with presentations of and looks at classic films, Casablanca is never included.  It should be.  A Broadway actor, Dooley Wilson originated the role of Joe in Cabin in the Sky done in the film version by Eddie "Rochester" Anderson.  Ethel Waters, with that glorious voice of hers, recreated her stage role as Joe's wife for Vincente Minnelli's directorial debut.  A new song was written for her to introduce in the film.  Harold Arlen and Yip Harburg's "Happiness Is Just A Thing Called Joe" was an Oscar nominee for Best Song. 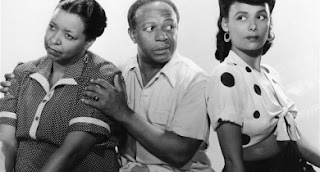 Waters (at the far left of the of photo with Eddie Anderson and Lena Horne) was the second black person to be nominated for an Academy Award, thanks to her supporting performance in the 1949 Elia Kazan race drama, Pinky.  The maid role Ethel Waters played in Pinky was the second film role the recording and Broadway musical star got after 1943's Cabin in the Sky.  The first black person to be an Oscar nominee was Hattie McDaniel.  She was the first nominee and the first winner, awarded Best Supporting Actress for her work as the sturdy, all-knowing, no-nonsense Mammy to iron-willed Scarlett O'Hara in 1939's classic Civil War drama, Gone With The Wind. 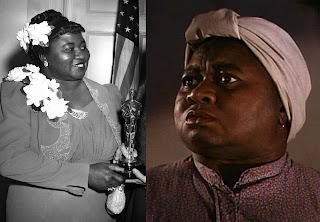 After the Oscar victory, McDaniel would spend pretty much the rest of her film career playing maids.  She'd frequently have a skimpy role as a maid even though she'd be the only member of the cast who'd won an Oscar.  Look at the satirical comedy, The Male Animal.  In that 1942 feature,  Hattie's a stereotypical black maid in a scene with Olivia de Havilland, Henry Fonda, Jack Carson and Joan Leslie.  She's the only actor in the scene who'd won an Oscar and made major Academy Awards history.  But she has the bit part with lines like "Yes'm.  I'll get it."  Hollywood largely under-utilized the skills of this talented, charismatic actress after her Oscar victory.

Hattie McDaniel acted in another project that made Academy Awards racial history.  She had a brief role as a singing mammy cook in Disney's Song of the South (1946). 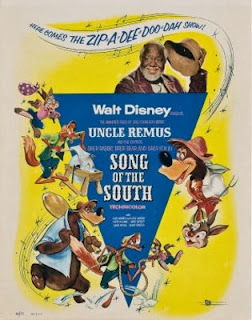 James Baskett played her friend on the plantation grounds, storyteller Uncle Remus.  For his work, Mr. Baskett became the first black man to get an Academy Award.  He was given an honorary Oscar for his work in the live action/animated Disney musical. 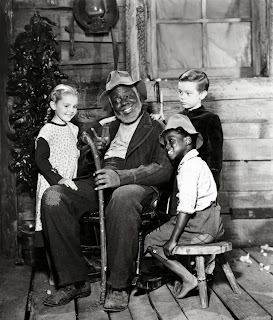 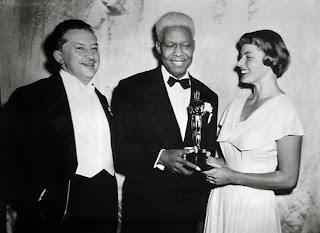 Actress Ingrid Bergman handed Mr. Baskett his honorary Oscar.  With them onstage was Hollywood humanitarian, Jean Hersholt.  Neither Hattie McDaniel nor James Baskett could attend the Atlanta premieres of the films that brought them Academy Awards because of racial segregation.

Sam in Casablanca was sort of a Bobby Short many years before the dapper entertainer became the darling of New York City's ritziest nightspots.  Think of Bobby Short singing "I'm In Love Again" in Woody Allen's Hannah and Her Sisters (1986).

One final note about Dooley Wilson's piano man character that thrills me:  When Rick sells his nightclub to Sydney Greenstreet's hefty character in the last act, he proves to be a great boss and a true friend.  He sells only if his longtime employees are kept on in their jobs.  That includes Sam.  For Sam, Rick negotiates a very nice pay raise. 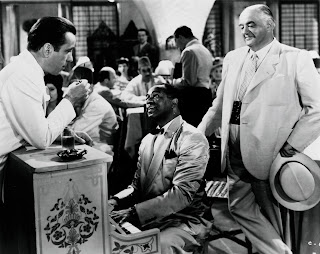 Sam did better financially with Rick in Casablanca in 1943 than I did with the guy who became my ex-broadcast agent in New York City in 1999.  And there you have it.
at February 15, 2012