Marilyn Monroe has been dead longer than she was alive.  She's still a star.  The film legend was famously copied by Madonna in her "Material Girl" music video.  Her numbers and look in Let's Make Love were referenced in a big number for Renee Zellweger in Chicago.  She's played by Michelle Williams in My Week With Marilyn, a performance that put Williams in the Best Actress Academy Award competition.  She's the basis for a new Broadway musical that's part of the plot in NBC's new series, Smash.  That'll be interesting to see.  The persona that Monroe created worked perfectly for the intimacy of film.  The almost feathery speaking voice, the jazz kitten singing voice, that fabulous face and figure were meant for movies with close ups.  She was not a Broadway belter.  She wasn't a Merman, Streisand, Minnelli, Lena Horne or Jennifer Holliday -- women whose voices could play to the last row of the balcony.  So how will Smash alter parts of Monroe's famed silky soft screen personality to fit the format of a brassy Broadway show?  Another thing:  With Monroe as the subject of a big musical in production, we have another TV show like Mad Men, The Playboy Club and Pan Am that, to a degree, takes us back to the 1950s & early 60s.  The pre-Civil Rights era. The star part in that Smash musical story-within-a-musical story is not exactly designed for a black actress.

Smash promises lots of Broadway backstage backstabbing and bitchery.  The kind we saw in the classic film, All About Eve.  The cast of that movie included a screen newcomer named...Marilyn Monroe.  NBC promotion for Smash has been relentless.  It seems like Glee for grown-ups, incorporating showtunes and new pop hits into episodic television as the new form of the variety series.  Both TV shows will have fans who were born well after Monroe's death in 1962.  Here are my Top 5 picks of films to show those fans the magic of Marilyn if they've never seen her work.  Each film has her playing a showgirl.  Just as Barbara Stanwyck could play the light and dark side of the ambitious woman (funny in The Lady Eve, Christmas in Connecticut and Ball of Fire, dramatic in  Stella Dallas, Meet John Doe and Double Indemnity), Marilyn was skilled at playing the light and dark of a showgirl.  She'd get deeper into the heart of her screen image, doing variations on her showgirl theme.  Part of her appeal to the Everyman Movie Goer was her sublime accessibility.  Onscreen it's in her Monroe Doctrine to fall for the bookworm.  She'd respond to the shy guy wearing glasses as if he was the hot musclebound hunk.  I loved that about her characters.  Her women with a How To Marry A Millionaire game plan were not so totally mercenary, we eventually discovered.

All About Eve:  In a bit role as Miss Casswell, Monroe manages who hold her own in scenes with screen heavyweights Bette Davis, Anne Baxter and George Sanders.  This was the Best Picture Oscar winner of 1950.  Davis and Baxter were in the Best Actress category.  Co-stars Celeste Holm and Thelma Ritter were in the Best Supporting Actress race.  George Sanders as theatre critic Addison DeWitt took home the Oscar for Best Supporting Actor.  He brings a blonde bimbo as his arm candy to a party at the home of Broadway legend Margo Channing (Davis).  DeWitt introduces his date this way:  "Miss Casswell is an actress, a graduate of the Copacabana School of Dramatic Arts."  The line tells us all we need to know about her acting range and I.Q.  Monroe knows the inner workings, expectations and limitations of this character.  Like Eve Harrington, Miss Casswell can survive the concrete jungle called Manhattan.  Watch as she goes into "Battle stations!" mode and zeroes in on a middle-aged Broadway producer, her cleavage pointed like submarine missiles.  Marilyn was perfectly cast.  Monroe and Oscar nominee Thelma Ritter didn't have any scenes together.  Monroe sat at the bottom of a staircase as Ritter descends, walking past her in the party scene. 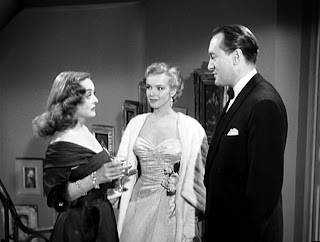 Gentlemen Prefer Blondes:  In this movie adaptation of a Broadway hit musical, Monroe put her own cinematic stamp on "Diamonds Are A Girl's Best Friend," a song introduced onstage by Carol Channing.  Here, Monroe is a dumb-as-a-fox showgirl who's determined to marry a millionaire.  The millionaire, played by Tommy Noonan, is a shy guy who wears glasses.  Monroe is absolutely yummy in this role.  And funny.  My late partner was younger than I and he was definitely of the Madonna generation.  I made him watch this to see where Madonna's inspiration for her "Material Girl" music video came from.  He watched the video three times in one weekend, laughing hysterically at Monroe, amazed at her  skills.  Marilyn could handle a jazz number.  I loved her singing voice. She made Jack Cole's complicated choreography in her big "Diamonds" production number look easy.  And her comic timing here was genius. 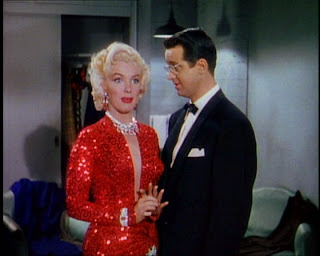 The Prince and the Showgirl:  Michelle Williams and Kenneth Branagh are Oscar nominess for playing Marilyn Monroe and Laurence Olivier during a week of filming this movie.  Again a showgirl, she's an American on tour in London in 1911.  Olivier plays the bellowing, randy Balkan prince who invites Elsie over for a late night supper.  We know that he intends for her to be dessert.  Not as wholly satisfying as the previous two films, it does highlight Monroe's growth as an actress.  She outshines Olivier, a renowned and respected Shakespearean actor, Best Actor Oscar winner and the director of this movie.  His performance seems geared for stage, the origin of this piece, while she does less. Perfect for screen technique.  She's very in-the-moment in this sexy and patriotic performance.   Elsie is pro-President Taft and takes a very American stance in bedroom negotiations with the Prince.  This sweetly clumsy showgirl gets involved in politics.  Just because she's blonde doesn't mean she's dumb.  Notice how she responds to the macho Prince's shy young son.  She prefers his manners to his father's.  Elsie has a tenderness for the repressed and overlooked.  Monroe's star power makes this worth watching. 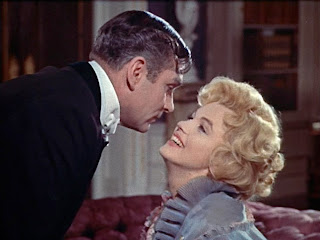 Some Like It Hot: Just try to imagine the Billy Wilder gender-bender comedy classic without Marilyn Monroe as singer Sugar Kane.  Sugar knows she's "not much of a singer" but she doesn't realize how special she really is.  Certainly, none of the louses she used to date treated her like she was special.  Again, she's an entertainer out to marry a millionaire.  She falls for what she thinks is a millionaire -- a shy guy who wears glasses.  Marilyn made Sugar one of the top ditzy blondes in a movie comedy.  She made Some Like It Hot even hotter. It's an iconic performance.  We loved Sugar.  We pulled for her to find happiness and not, once again, wind up with "the fuzzy end of the lollipop." 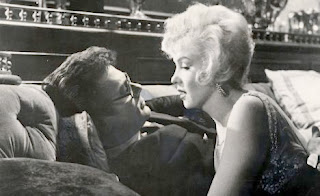 The Misfits:  Monroe's last film was this 1961 drama written by Arthur Miller, her husband, and directed by John Huston. (The director was the father of Anjelica Huston, Smash cast member.)  Clark Gable, whom Miss Casswell mentions in All About Eve, is her leading man.  One of her other co-stars is Thelma Ritter from 1950's All About Eve.  By now, Monroe has evolved from bit player to Hollywood movie queen -- just like Ritter's 1950 co-star, Bette Davis.  Marilyn plays Roslyn, a divorced showgirl who's disillusioned by life.  She searches for meaning and kindness.  She is a misfit, as was Monroe herself.  Only after Monroe's untimely death at age 36 would she get respect from entertainment journalists for her film acting skills.  In life, she made headlines as a superstar sex symbol.  This film may have a screenplay that goes a little choppy but you cannot deny the heartbreaking impact and rawness of Monroe's dramatic work here.  She knows the emotional wounds of the woman she's playing.  Monroe seems to expose her soul in her final film performance.  The scene that caught my heart in my youth, when I first saw The Misfits, is a scene of rage.  Roslyn calls out the men with her on their severe lack of compassion in the world.  If any Hollywood actor of that time was meant for lush Technicolor close-ups, it was Marilyn Monroe with that whispery voice. That's flipped with stark contrast in The Misfits.  For her rage, Huston places her way off in the distance, in black and white, screaming her anger on flat barren land.  It's one of Monroe's strongest, most poignant moments onscreen.  So is her last line -- the last line we'd hear from her in a completed movie: "How do you find your way back in the dark?" 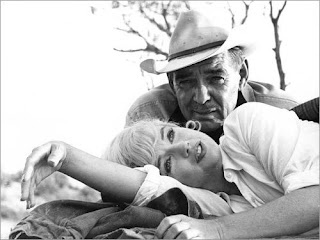 A Smash Broadway musical about Marilyn Monroe, as I wrote at the top of this piece, would take us to a pre-Civil Rights Era.  Monroe herself was very pro-racial tolerance.  She did her bit to end a certain bigotry at a time when a top Hollywood movie studio would be nervous about its big star getting involved with a civil rights issue.  Those were not the days of "political correctness" in Hollywood.  I learned from Outrageous Acts and Everyday Rebellions, a book of essays by Gloria Steinem, that Monroe helped her favorite singer, Ella Fitzgerald, break through a Hollywood color barrier.  There was racial exclusion in top nightclub bookings.  Fitzgerald said that, when Monroe found about Ella's discrimination problem, she used her movie star clout to help.  Fitzgerald never again had that problem with nightclub bookings. 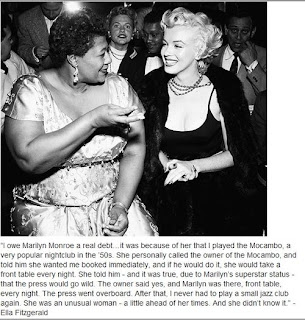 I wonder if a BET could give us a Smash-like show with two actresses vying to star in a Broadway musical based on the life of Dorothy Dandridge.  She was the first black woman to be nominated for the Best Actress Academy Award thanks to her scintillating performance in the 1954 musical drama, Carmen Jones. That was an updated version of the Bizet opera, Carmen. The Otto Preminger film brought much acclaim and attention to Dandridge. 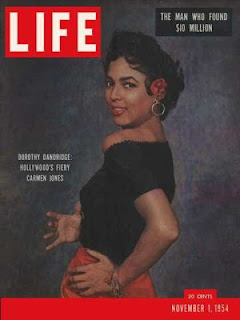 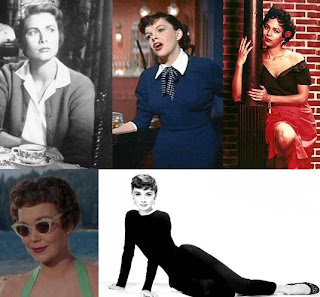 I think a Dorothy Dandridge-inspired Broadway musical could work in a show like Smash.  Just my opinion.  What do you think?  Feel free to leave me some comments.
at February 06, 2012