My Mom in Hollywood

When I was a youngster growing up in South Central Los Angeles, this cowboy made it possible for my mother to buy me some new shoes for Catholic school. 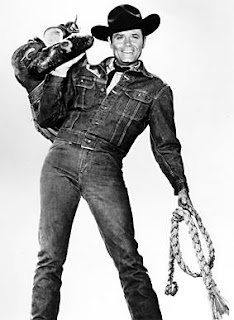 This was back in the 1960s.  My parents had divorced and Mom needed extra income.  Dad was a postal clerk for the Terminal Annex in downtown L.A.  Mom was a registered nurse, a veteran of much hospital duty.  If you see old TV shows and movies in which nurses wear white uniforms with starched caps, matching white regulation shoes and white stockings that made their legs look like drumsticks ready to be deep fried, that's just how our mother dressed for years going to and coming home from work.  Mom loved being an R.N. (Registered Nurse).  She loved being in the nurse's union.  It was my mother who taught me "Mind your manners," "Don't talk to strangers" and "Never cross a picket line."  By the time Mom and Dad had separated, she was working as a public health nurse.  The hours were more stable than hospital hours.  No night shifts.  She could be home for dinner.  And she didn't have to wear a white nurse's uniform at the clinics.  Working in the community, Mom met some women who did domestic work in Hollywood.  Two of them dropped by our house.  I remember Mom chatting with them one sunny Saturday afternoon on our front lawn about working for celebrities.  I wasn't even in high school at that time but I was already fascinated with the movies and the folks who made them.  These two black women with Mom were in shop-talk mode.  In sharing their occupational experiences, the two ladies mentioned that "the people you really want to work for are Peter Lorre... 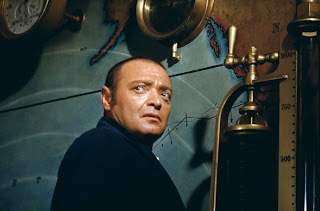 ...or Elizabeth Taylor.  You work for them and you can't tell if you're the domestic help or a houseguest. They treat you that well." 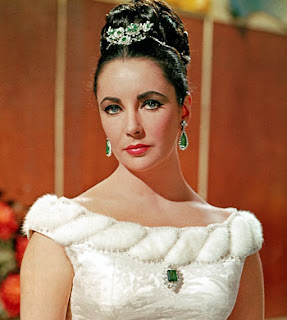 One added, "You have your work cut out for you when you work for Elizabeth Taylor.  Being a movie star, she's not used to picking up after herself but she will treat you right."  The other woman, who had worked for Peter Lorre, commented "He made me lunch!  We sat there and ate lunch together at his table."  Different from any dialogue you heard in The Help, isn't it?  They hooked my sophisticated, college-educated mother up with an agency to contact so she could make some extra cash money on Saturdays working for a Hollywood wife.  One day, Mom came home and told me that she'd gotten an extra job.  The woman who hired her, she calmly revealed, "...is married to Stoney Burke." 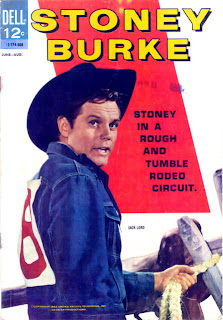 Wow! I could not wait to get to school and brag to my classmates that my mom would be working for TV star, Jack Lord.  She would be in the home of the man who played rodeo cowboy Stoney Burke on ABC!  Mom gave me that "hold your horses" look and told me this was news to keep within the family.  I do remember Mom calling me on a Saturday after finishing her part time work.  She told me to be ready.  She'd drive home, get me and take me to Thom McAn's to buy me new shoes for school.  My mother is now in her 80s and recovering in a good facility from a fall in her house.  She had leg problems and another health issue.  I visited her last weekend.  Odd to see the nurse convalescing in bed and in need of a nurse's care.  Mom and I talked for hours.  It was a wonderful visit.  She was healing and in great humor.  She brought up her brief time being employed by Marie Lord, Jack Lord's wife.  Mom liked her and appreciated her very much.  She said that Jack Lord "...was very particular about how he wanted his shirts ironed.  Starch in the collar."

Like my mother, I'm older now too.  I had to crash through some of the same color barriers that my mom -- and dad -- did as a black person in America.  I have so much more respect for my mother taking that job with no trace of ego or vanity.  In fact, in order to make that extra household money doing someone else's laundry, she tried to play down her educational background and skills.  My mother had assisted doctors in surgery.  To get the job, which paid cash, she tried to seem less educated than she was.  Apparently, Mrs. Lord caught on when -- during casual talk about movies -- Mom gushed about how much she loved Simone Signoret in Stanley Kramer's Ship of Fools.  Not only that, Mom thought it was one of her best performances since Room at the Top, the British film that brought the French star the Oscar for Best Actress of 1959.  Mrs. Lord knew immediately that there was more to this woman who was ironing her clothes.  This black employee was, in a way, playing a part.  She was acting the role of a minor character in a Hollywood home.  Mom said that they then "just talked like a couple o' women" and she explained to Mrs. Lord that she was a newly-divorced working mother of three.  Without alimony.  And two of her three kids were in Catholic school.  Mrs. Lord offered my mother a different job.  More upscale, with more money.  Mom said, "She wanted me to be her social secretary but I felt I just couldn't do it with three kids to raise."  Life was changing for our mother.  Life would soon change for Mrs. Lord and Mr. Lord.  "We're moving to Hawaii," she told Mom one Saturday.  The job of ironing Jack Lord's shirts came to a comfortable end because he had to move.  Jack Lord had booked a new acting job.  He was relocating to start a new TV series for CBS:  Hawaii Five-O. 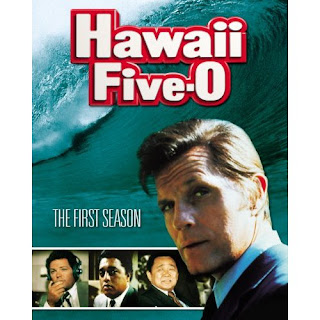 The rest is TV history.  The star of series is part of our Rivers Family history.  I loved that tropical cop show.  I'd watch Jack Lord as Detective Steve McGarrett. Every time he said "Book 'em, Danno," I'd think "Wow, my mom used to iron his shirts.  His wife was really kind to my mom."  And my mother was really kind to do that extra work for us kids.  She tried to make herself seem less than she was so she could do more for her children.
at February 16, 2012