This superb Black actress has already made Oscar history -- and she could make even more this weekend. That's why I winced at a casual comment about Viola Davis made by two Caucasian female film critics Friday on KPCC, a National Public Radio station in Pasadena, California. Its website is scpr.org. Do not overlook the Hollywood history the bold and brilliant Viola Davis has made. Do not overlook the lack of Hollywood equal opportunities she had to conquer. 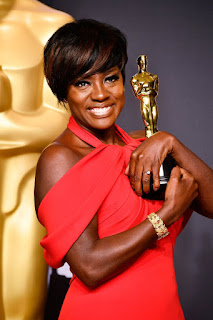 Larry Mantle is radio gold. He's the warm, smart, unpretentious, native-born Southern California host of a weekday morning show called AIRTALK. I stream it on a regular basis. The 11:00 hour of his Friday editions is devoted to FILMWEEK, a wonderful film review show. To me, the top quality about FILMWEEK is Larry's commitment to race and gender diversity in the groups of informed and interesting film critics he brings onto the program. National TV was negligent in this area. TV gave us syndicated shows with pairs of movie critics. From the trailblazing Gene Siskel & Roger Ebert, to Jeffrey Lyons and Neal Gabler, to Rex Reed & Bill Harris, to Roger Ebert & Richard Roeper, to Ben Mankiewicz & Ben Lyons (son of Jeffrey Lyons), plus the TODAY show's Gene Shalit and GOOD MORNING AMERICA's Joel Siegel, the weekly field of film critics on national TV was predominantly White male. And TV columnists never called out the lack of race/gender diversity in all those years from the 1980s to 2009.

On Friday, Larry Mantle assembled a group of critics to make their Oscar predictions for Sunday night's awards telecast.  When it came to the Best Actress category, critic Amy Nicholson said that nominees Viola Davis and Carey Mulligan already have enough awards for their 2020 film performances in MA RAINEY'S BLACK BOTTOM and PROMISING YOUNG WOMAN. On that point, critic Christy Lemire agreed with Amy. I was sensitive to that remark in regards to Viola Davis because the two White female critics did not factor in Hollywood's Black history. 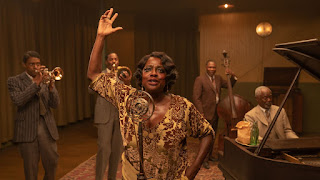 In all Hollywood history, only one Black woman has won the Oscar for Best Actress. That was Halle Berry for the 2001 drama, MONSTER'S BALL. With just two Oscar nominations, Whoopi Goldberg reigned for 20 years as the most Oscar-nominated Black actress in Hollywood history. She was a Best Actress Oscar nominee for 1985's THE COLOR PURPLE. She won the Best Supporting Actress Oscar for 1990's GHOST. I performed with Whoopi from 2006 to 2008. She had me hired to do entertainment reports and film reviews on her national weekday morning radio show out of New York City. Whoopi had been one of my first guests on my VH1 prime time celebrity talk show in the late 80s. That radio show led to Whoopi being offered a regular spot on ABC's THE VIEW. I loved working with her. 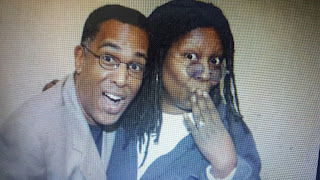 With her current Oscar nomination, her 4th, Viola Davis is now the most Oscar-nominated Black actress in all Hollywood history. However, after her nomination for 2011's THE HELP -- and before she won the Best Supporting Actress Oscar for 2016's FENCES -- she became one of the several Black actresses who had to turn to TV for steady work after receiving an Oscar nomination because Hollywood had no other good script opportunities for them. This lack of Hollywood movie offers stunned the then 2-time Oscar nominee. Viola went to ABC and starred on the 2014 series, HOW TO GET AWAY WITH MURDER.

I've blogged before that the group of Black actresses who had to turn to TV for work offers after they'd received Oscar nominations includes one-time Oscar nominees Cicely Tyson, Diahann Carroll, Angela Bassett, Alfre Woodard, Taraji P. Henson and Gabourey Sidibe. And even Latina Rita Moreno who won the Best Supporting Actress Oscar for 1961's WEST SIDE STORY. She had no Hollywood script offers for 7 years after her Oscar victory, so she did TV.

Did Marisa Tomei have to turn to TV for work after she won the Best Supporting Actress Oscar for 1992's MY COUSIN VINNY? No. Did Julia Roberts, Michelle Williams, Jennifer Lawrence, Amy Adams, Cate Blanchett or Emma Stone have to turn to television for employment after receiving their first Oscar nominations? No. All those White actresses got more Hollywood script opportunities that enabled them to get other Oscar nominations.

Tell critics Amy Nicholson and Christy Lemire to consider Black Hollywood history and wish the amazing Viola Davis good luck. If she wins, she'll be the second Black woman in Hollywood history to win the Best Actress Oscar and the only Black actress to have more than one Oscar. 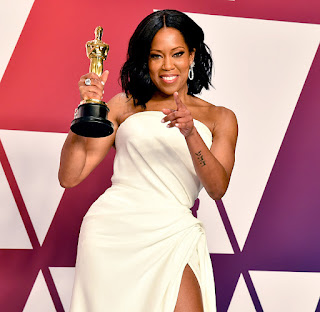 While we're on the topic, did they acknowledge the history fabulous Regina King has made? She won the Best Supporting Actress Oscar for her great work in 2018's IF BEALE STREET COULD TALK. Then she got behind the camera as the director of ONE NIGHT IN MIAMI and made cast member Leslie Odom Jr. a current Best Supporting Actor Oscar nominee for his performance in it. Those two achievements as an actress/director are a first for a Black woman in Hollywood history. To have won an Oscar for acting and then to have directed an actor to an Oscar nomination -- the only other female I can think of who did that previously is Barbra Streisand.