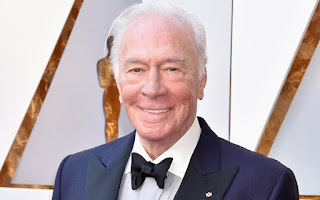 When I, a single guy, accepted a job offer to work on TV in New York, I moved there and dreamed of meeting a good Black/Latino man -- a few years older -- who was also lonely and romantically unattached. One night we'd dance, look into each other's eyes and feel a spark...just like Julie Andrews and Christopher Plummer in THE SOUND OF MUSIC.

I saw Christopher Plummer on Broadway as actor John Barrymore. I saw him as CBS reporter Mike Wallace in THE INSIDER (1999) and strongly felt he should've been a Best Supporting Actor Oscar nominee for that performance. I wondered when the Academy would finally give him an Oscar nomination. Well, the Academy got it together with his performance in 2009's THE LAST STATION. I was thrilled when Plummer won the Best Supporting Actor Oscar for playing a gay dad with a grown son in 2010's BEGINNERS.

We who love films often put great stock in the reviews of noted film critics. We've based our movie-going choices on their praise or pans. But there are times when we go against the scholarly writings of a prestigious critic who didn't like a certain film. There are movies that are unloved by critics but hold a special place in our hearts. There was something about them that touched our soul, entertained us or gave voice to feelings we had that we didn't know how to or dared not express. For me, one such film is 1965's INSIDE DAISY CLOVER. It starred Natalie Wood and Christopher Plummer and was released a year after Fox's Oscar-winning box office blockbuster, THE SOUND OF MUSIC. Most critics disliked INSIDE DAISY CLOVER, a Hollywood-on-Hollywood story. However, Charles Champlin of The Los Angeles Times felt that Plummer's performance as the successful, glacially sophisticated and morally tainted head of a major Hollywood studio in the 1930s was worthy of Best Supporting Actor Oscar consideration. Natalie Wood played the hardscrabble Santa Monica teen girl who can sing. The studio head discovers her, manipulates her and signs her to a contract. She becomes a troublesome star. True, Wood was 10 years too old for the role. I didn't care. She was one of my favorite movie stars.

I'm the oldest of three children. I was just starting middle school and the emotional temperature in our home had changed. Mom and Dad had separated twice. The air had a heaviness to it. Their divorce was inevitable. One evening, they weren't speaking to each other. Dad decided to go to a movie and asked me if I wanted to go with him. I was already a film geek by that time. He chose the nearest movie theater, not really caring what the movie was. We saw INSIDE DAISY CLOVER.

It marked the last father and son bonding time I had with Dad before he moved out of the house.

I loved Natalie Wood in the movie. I loved the cinematography of the movie, the musical numbers, the drama, the actors and their performances. In one scene, the overworked and emotionally frayed star has to dub one of her musical numbers for an upcoming release. Her teen life is following the demands and assignments from middle-aged people. On the soundstage, she has a breakdown. Click onto the link to see a clip:

I was a good little Catholic boy, a polite bookworm and film geek who never complained and did what we was told. Daisy's breakdown reflected just how I felt inside dealing with my parents' crumbling marriage, being a new kid at a new school and my duties as a son. Critics may have been cold to INSIDE DAILY CLOVER but it gave voice to feelings I definitely had and didn't know how to express.

That's what movies can do. This weekend, I'm going to watch Christopher Plummer in KNIVES OUT again.