If you've seen the movie, you know that Ann Miller's glamorous Broadway star character has a very pretty Black maid named Essie. Essie has only a few lines in the movie and she's played by Jeni Le Gon. Her name does not appear in the credits -- an omission that happened to many Black performers in those Hollywood days who had minor roles as domestics and service employees. They went uncredited. Instead of MGM just giving Le Gon under 10 lines in the whole movie, she should've had a dance number with Ann Miller. Like Ann Miller, she could pick 'em up and lay 'em down in the dance department -- as she had shown in a few movies. 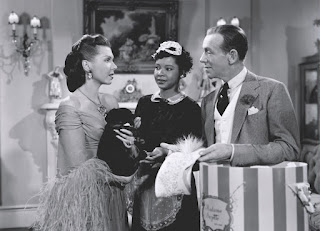 Jeni Le Gon had a specialty number in the Fox fantasy musical for Eddie Cantor, ALI BABA GOES TO TOWN. In that 1937 movie, Cantor played a guy who winds up on the location set of a studio shooting a movie about the Arabian nights. He falls asleep and dreams he's back in Baghdad. Jeni Le Gon has a dance solo in the "Swing Is Here To Stay" number. Now, I warn you, Eddie Cantor in the 1930s was a performer -- like Al Jolson -- who did blackface numbers in his movies -- a carryover from his days as a Ziegfeld star on Broadway. Also in the number are the Peters Sisters, a singing trio. Popular in New York City, they had booked a gig at a Hollywood nightclub. But they weren't getting paid for it. They figured the appearances could lead to something. It did. Eddie Cantor was in one night, saw their act and immediately had them signed to sing in ALI BABA GOES TO TOWN. Here's the number with them, Eddie Cantor and dancer Jeni Le Gon..
In 1939, Jeni Le Gon had a number in an independent feature for Black audiences called DOUBLE DEAL.
She grew frustrated with Hollywood discrimination. In the 1960s, she moved across the border to Vancouver,  British Columbia. There, she opened a dance studio and became a revered, celebrated local figure. She passed away in 2012 at age 96.