In between the time I posted my first two reviews of TED LASSO and now, Jason Sudeikis won another award for outstanding actor in a sitcom. He won the Screen Actors Guild award. I watched two more episodes of the show today -- and they reaffirmed to me why he won the awards he did. He's excellent as the steely optimist and so is the rest of the cast. It's truly an ensemble situation. TED LASSO boasts one of the best ensemble casts in one of the best-written sitcoms I've seen in a long time. In addition to the acting, what I've come to love a lot is the fact that the episodes are never afraid to tap into complicated, often wounded, emotions. It doesn't sacrifice them in order to go for a laugh. The show is funny, touching, surprising and compassionate. 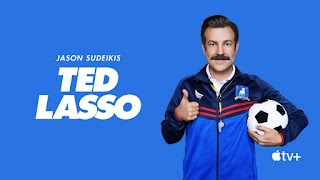 This sitcom gives depth to the "fish out of water" angle. Ted coached college football in Kansas. Now he's in the United Kingdom coaching a struggling football team. However, in Great Britain, what they called "football," we Americans call soccer.

The first episode I watched began with Ted, alone, unhappily removing his wedding ring. Then Jamie (Phil Dunster), the vain and popular handsome member of the team, decides he cannot participate in practice because he's hurt. Ted's heart is broken but he still coaches with full gusto and optimism. His glacially poised and manipulative team-owner boss, Rebecca, is also handling a personal jolt. It's the anniversary of her divorce. He ex has a new, young girlfriend as reported in the tabloids. Her name is Rebecca too. So the tabloids refer to the ex-wife as "Old Rebecca." On top of all that, the team clubhouse may be cursed. The team comes together to remove the curse.

The episode of about moving on past the pain. During it, Ted receives papers from his wife's lawyer that he has to sign. The episode it's funny. It's also a little sad. Ted dearly loves his wife and their little boy back in America.

The next episode I saw had the team taking a road trip to Liverpool for a match. Because of his personal heartbreak, Ted loses his temper with Nate, the locker room attendant (Nick Mohammed). Nate had submitted notes on the team to Ted. Ted apologizes sincerely and compliments Nate on the notes. They're good. He has Nate deliver them verbally to the team and we see Nate's coach potential. 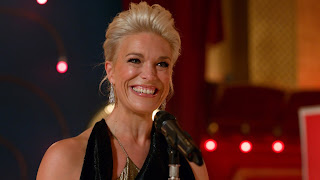 This episode, too, was very funny -- nevertheless, I had tears in my eyes at the end of it. I was that touched by bruised and tender feelings that came forth. TED LASSO -- what a good sitcom and what a good lead performance by Jason Sudeikis.