Well, it happened again. My heart was touched and my soul was moved by a current short film -- a feature that runs only 30 minutes in length. The name of the short film is FEELING THROUGH, tenderly written and directed by Doug Roland. My previous blog post is about the short film called TWO DISTANT STRANGERS. FEELING THROUGH and TWO DISTANT STRANGERS are Oscar nominees in the same category for this coming Sunday's Oscars telecast. Director Doug Roland gave us a half-hour gem. I loved this New York story. 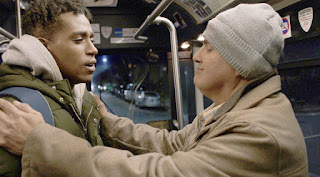 Recently, I watched one of my favorite classic film biopics on cable's TCM (Turner Classic Movies). It was the 1962 movie, THE MIRACLE WORKER. Anne Bancroft, as teacher Annie Sullivan, won the Oscar for Best Actress. Patty Duke, as young deaf and blind Helen Keller, won the Oscar\for Best Supporting Actress. If I held a special theater screening of THE MIRACLE WORKER today, I would show FEELING THROUGH on the program's bill before presenting THE MIRACLE WORKER. The two productions belong together. 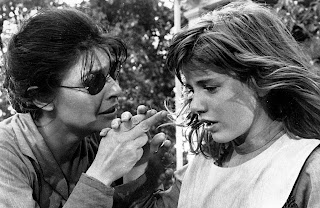 The FEELING THROUGH story is simple yet important. It's about human connection. A Black teen named Tereek is hanging out with buddies late one night in New York City. Eventually, they go home but he can't. He's homeless and he texts friends to ask if they can put him up for the night. No luck. It's about 1:00 in the morning and he spots a middle-aged man at a bus stop. The middle-aged man at the bus stop holds up a small sign to a homeless man who is politely asking him for money. The small sign reads: "I am deaf and blind."

Tereek, the teen, approaches and makes contact with the man at the bus stop. The deaf and blind man writes on a notepad that he's waiting for the M15 bus to take him uptown. His name is Artie. Instead of just walking away, Tereek stays and reaches out. "I got you," he says as he sits with and helps the man.

Artie's disability reveals Tereek's character. When Artie wants to buy something to drink, the homeless teen takes him to a nearby bodega. Artie hands Tereek his wallet. There's cash in it. Will Tereek be honorable with the blind man's cash? Can Artie get home?
A longtime, cherished friend of mine in New York introduced me to this short film. He works in the deaf/blind immersion department for the Helen Keller National Center in Sands Point, New York. Robert Tarango worked in the cafeteria there. Then, one day, he was discovered by writer/director Doug Roland to play the deaf and blind Artie in FEELING THROUGH.
Actor Robert Tarango is actually deaf and blind.
He is excellent as Artie and Steven Prescod is equally excellent as Tereek. The two actors connect as their characters. They make this short film a moving and memorable feature. FEELING THROUGH shows us the power and beauty of reaching out to someone in need and saying "You'll be okay." One of the feature's executive producers is Marlee Matlin. She won the Best Actress Oscar for 1986's CHILDREN OF A LESSER GOD.
FEELING THROUGH can be seen on YouTube. I highly recommend seeing this compact, compassionate half-hour film.
To read about the Helen Keller National Center, click onto this link:  HelenKeller.org.