About A LOVE SONG FOR LATASHA

A feature need not be two hours to hold your interest, introduce you to new characters and possibly move you to tears. All that can happen in a feature that runs under thirty minutes. I know. I saw a short documentary that put tears in my eyes at the end -- and it's only 19 minutes long. A LOVE SONG FOR LATASHA is on Netflix. 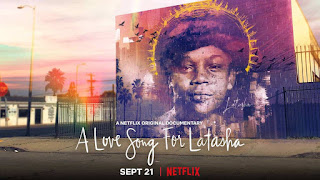 About Latasha Harlins, friends and relatives said ""Latasha was more responsible," "She wanted to be a lawyer" and "She was a loving person." In South Central Los Angeles in 1991, the 15 year old African American girl was wrongfully accused of stealing some orange juice that cost under $2.00. She was shot and killed by the storeowner.

I listen to a show on KPCC, an NPR station based in Pasadena, California. The show I listen to is AIRTALK hosted by Larry Mantle. On the Friday editions of the weekday show, there's one hour called "Film Week." As you probably guessed, it's one hour of film reviews and interviews. The show always boasts a race/gender diverse group of guest critics. Last Friday, during the discussion about Oscars and documentaries, two female critics -- one Asian American, the other Caucasian -- highly recommended A LOVE SONG FOR LATASHA. One mentioned that the death of Latasha Harlins was a catalyst in L.A.'s Rodney King verdict riots the following year.

I grew up in South Central Los Angeles. I left to attend a university in Milwaukee in the 1970s. After graduation, I worked in that city for 10 years and then accepted a job offer to work on TV in New York. I've visited, but I have not lived in Los Angeles for a long time. I was unfamiliar with the Latasha Harlins story, one that was major in L.A. news.

I immediately recognized streets in the short documentary as I watched it. That was my community. That's where my story began. That's where I grew up. In the documentary, we never hear from Latasha. We do see her. All the dialogue is comments and recollections from those who loved her. They tell her moving story. As the documentary begins, we learn that the girl was someone who didn't think twice about charging in to help someone in trouble.

As the short documentary unfolds, one can understand how her untimely death still weighed heavy in the hearts of Black Los Angelenos when the verdict in the Rodney King trial was announced.

Hers was a senseless death. A true tragedy. This world needs people like Latasha Harlins. Just like the two critics on "Film Week," I also highly recommend A LOVE SONG FOR LATASHA.